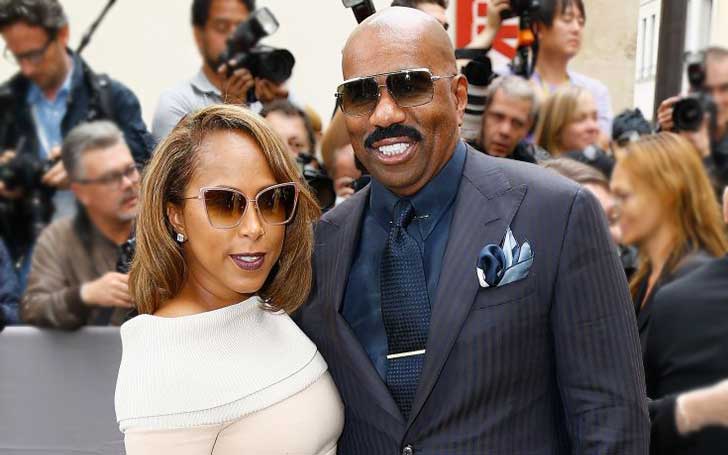 Marjorie Elaine Harvey, famously known as the wife of renowned comedian and television host, Steve Harvey, is an American fashionista. Besides, Marjorie is a famous Instagram personality with over 2 million followers as of 2020.

Marjorie and Harvey lead a happily married life with their seven kids. In spite of Marjorie’s outspoken personality, there still are some facts that she and Steve’s fans are unaware of.

Do you know about her parents, siblings, biological, step-children, ex-husbands? Let’s explore them all today.

Marjorie Elaine Harvey was born as Marjorie Elaine Ridge-Woods on October 10, 1964, in Memphis, Tennessee. She is 55 years old as of July 2020. Her mother is Doris Ridge while her father’s name is not disclosed as of yet.

Marjorie belongs to mixed ethnicity. Her father is an African American while her mother belongs to the White racial background.

Grew up in Memphis with a Brother

Marjorie Harvey was born and raised in Memphis, Tennessee with her sibling, a brother. She revealed that she was raised with her brother on Instagram where she responded to a comment by one of her followers.

Back in 2018, Marjorie shared a couple of photos on her Instagram after she visited her parents in Memphis. After seeing her parents’ old house in the photo, many of her fans raised questions on how she should have arranged a better living for her parents.

In response, Marjorie said she takes excellent care of her parents and would buy a house for them too. However, since her father loved the house he built for his family, she didn’t want to disrespect him by  saying “it’s not good enough,” or ‘small.’

She is Pretty Close to Her Parents

Marjorie lives with her husband and children in LA while her parents live in her hometown Memphis. However, she goes up to her parents’ residence frequently. She also shares photos with her parents every time she visits them.

She is a drop Out

According to The Famous People, Marjorie attended the University of Memphis, however, she dropped out due to a bad report.

The 55-year-old socialite has been married three times including her current marriage to Steve Harvey. Meanwhile, both of Marjorie’s exes were renowned criminals. Marjorie and her first husband, Jim L. Townsend, got married in 1990. Jim was later sentenced to life in prison and as per some sources, Marjorie divorced him around five years after he was sentenced.

Marjorie’s second husband was the notorious drug dealer Donnell Woods. At first, she was in a relationship with Donnell’s brother Ronnie but after he went to prison, she started dating Donnel. It’s not clear when the ex-pair got married and how their marriage was dissolved.

Marjorie has three children, Morgan, Jason, and Lori,  from her two marriages.

After two unsuccessful marriages, Marjorie found the love of her life, Steve Harvey. Having crossed each other’s path a decade ago, Marjorie and Steve Harvey got connected during the mid-2000s. After around a year of dating, Marjorie and Harvey tied the knot in 2007. The lovebirds walked down the aisle on the 25th of June 2007.

Meanwhile, Steve Harvey was married two times before he started dating Marjorie. He was married to Marcia Harvey from 1980 to 1994 and Mary Shackelford from 1996 to 2005. Harvey has four children, Broderick Harvey Jr., Wynton Harvey, Brandi Harvey, and Karli Harvey from his two marriages.

Marjorie and Steve don’t share any biological children, however, they are parents of seven children. Steve adopted Marjorie’s three children following their nuptials. As of now, the Harvey-duo has five grandchildren.

Steve once said He would Marry Marjorie the Day They Met

Marjorie and Steve Harvey had their first encounter in 1990 when Marjorie reached a club with her friend where Harvey was performing. Marjorie and her friend sat in the front row and upon their arrival, Harvey couldn’t keep his eyes off Marjorie.

Afterward, Steve, from the stage, told her: “I don’t know who you are but I am going to marry you.” Even though it appeared as a joke at the time, fate brought them closer ultimately and they got married indeed. In one episode of Harvey’s show, Steve TV Show, Steve and Marjorie recalled the moment they met. Here is the clip.

Harvey Proposed Marjorie in a Hotel in Mexico

In 2014, during a segment called “Just One More Thing” on his TV show, Steve Harvey reminisced his proposal to his now-wife Marjorie. In the segment, the show host said he took her to Cabo, Mexico where he had planned to pop the question.

Steve said as the pair checked into a hotel, Marjorie said she was too sleepy and didn’t want to go to dinner. Yet, he somehow managed to persuade her to go to the dinner in a private room inside of a wine cellar. The two had dinner and then two waiters came up with dessert in two white platters with a silver dome.


As one of the waiters opened Steve’s dome, it had a chocolate lava cake, however, as the other opened Marjorie’s dome, it had a box that looked like a “square piece of gelatin.” Steve went on saying that he then opened the box and got down on his knee and proposed her.

Marjorie Harvey is a Multimillionaire

According to Celebrity Net Worth, Marjorie has a net worth of $50 million in 2020.

Meanwhile, her husband Steve Harvey has an exquisite net worth of $200 million. Further, the source reported the 63-year-old comedian earns a decent annual salary of $45 million.