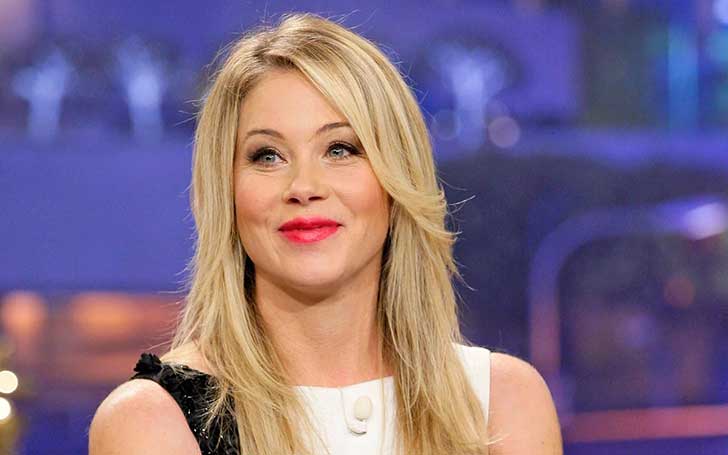 Starting as a child actor, Christina Applegate went on to become one of the well-known stars in Hollywood. She rose to prominence from her role as Kelly in Fox sitcom, Married… with Children. Meanwhile, many of her fans recognize her from her guest appearance as Amy in NBC sitcom Friends. Her role in the ninth and tenth seasons of the show gained her the only Emmy of her career.

With more than three decades of an active career in acting, Applegate’s acting career is quite evident to her fans. But, she has been keeping most of her personal details behind the curtain which has made her fans curious to know about her private life even more.

So, we’ve come up with some exclusive details about her personal life including her marriage and kids.

The 48-year-old Jesse star is married to Martyn LeNoble for over seven years. The lovebirds tied the knot on February 23, 2013, at their Los Angeles home four years after they started dating. Applegate’s representative confirmed their marriage revealing the actress and her husband opted to keep their nuptials private.

They started dating in 2008 and a couple of years later, they became engaged on Valentine’s Day 2010.

A couple of years later, Applegate collaborated with Peter DiStefano, Stephen Perkins, and Perry Farrel to form the rock band Prono for Pyros.

They Have a Daughter Together

Married for over seven years, Christina Applegate and husband Martyn LeNoble have a daughter, Sadie Grace LeNoble. They gave birth to their only child on 27 January 2011, two years before they officially became husband and wife.

Actress Christina Applegate has revealed time and again that her husband Martyn had always been by her side during her battle with breast cancer. Applegate and Martyn had just started dating when she was diagnosed with the disease. Christina once said of her husband’s support as:

“Martyn has really been an incredible part of my life. He came around at a time when there was a lot of loss in my life on many levels, so he’s been a really incredible help.”

Applegate was diagnosed with breast cancer in 2008 when she was only 36 years old. A representative of the Samantha Who? actress announced the news in a statement in early August that year. The statement read:

“Christina Applegate was diagnosed with an early form of breast cancer. Benefiting from early detection through a doctor-ordered MRI, the cancer is not life-threatening.”

With Applegate underwent a double mastectomy even though cancer was found in only one breast. And on August 19, 2008, it was announced that Applegate was cancer-free.

Christina Applegate was married to her first husband, Johnathon Schaech from 2001 to 2007. The ex-pair walked down the aisle in Palm Spring, California on October 20, 2001. They dated for a while before they decided to give their relationship a name.

The pair, who spent years happily as a couple, however, couldn’t handle their marriage well. They started facing ups and downs early in their married life. And in 2005, Applegate and Schaech separated. Months after their separation, her husband filed for divorce in Los Angeles Superior Court.

In the meantime, their publicist released a statement announcing the husband and wife of four years have filed for divorce. The statement said:

“After four years of marriage, actors Johnathon Schaech and Christina Applegate have filed for divorce. The decision is mutual. We have no further comment at this time.”

Schaech, who is notable for his appearance in the movie That Thing You Do! cited irreconcilable differences in the court papers. The ex-pair doesn’t have any children together.

They finalize their divorce over a year later in August 2007.

Christina Applegate and Lee Grivas started dating after the actress separated from her first husband, Schaech. They started dating in 2005 shortly after Christina’s husband filed for divorce.

Back then People magazine reported that Applegate and the Alaskan fisherman and then-aspiring photographer met through a dancer in her Broadway show, Sweet Charity. “We’re very happy with each other,” Grivas told People.

Even though the ex-pair seemed head over heels with each other, Lee’s drug addiction gradually started creating troubles in their relationship. Due to this, they dated on and off several times before calling it quits in 2008.

Shortly after their breakup, Lee was found dead in his Hollywood apartment. On July 1, 2008, a neighbor of Lee found him unconscious in his room. He was pronounced dead at 5:25 that evening.

His autopsy declared Grivas died due to a drug overdose.