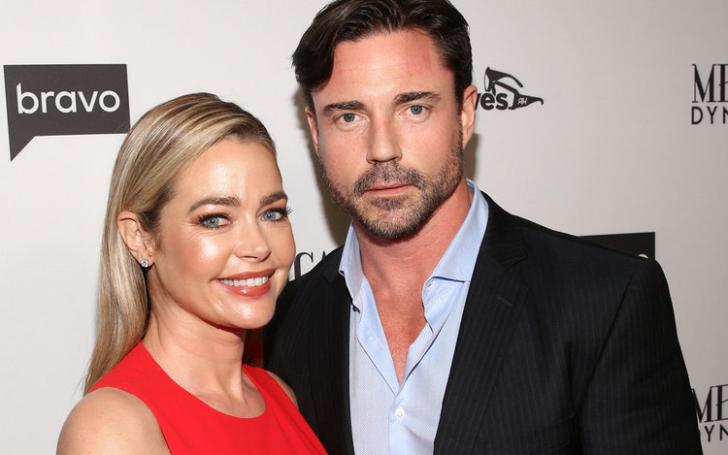 Denise Richards is famous for her role in the series, The Real Housewives of Beverly Hills. The 49-year-old has had a lot of suitors in her life and out of those only two of them got to marry this beautiful actress.

From her first marriage, she even experienced motherhood for the first time. Even so, things ended rather badly between Denise and her now ex-hubby, Charlie Sheen. But they are in good terms now and Denise is happily married to her second spouse.

So how is her marriage life going on? Here’s all the insight into her personal life and relationship with her husband.

Who is Denise Richards’ husband? About their wedding ceremony

Since 2018, Denise is in a happy marital relationship with Aaron Phypers. The couple tied the knot on September 8th, 2018, in a small ceremony. Judging by their wedding dresses, it seems as if the duo didn’t care for extravagant nuptials.

Her then-fiancee Aaron rocked a casual look with a white shirt and a pair of trousers. On the other hand, Richard looked gorgeous in a white mini-skirt with a flowing tulle skirt overlay. Moreover, while walking down the aisle, she held a pink and white bouquet.

After the wedding, Richard stated, “I am so happy to officially be married to the love of my life.”

She further, “I can’t wait for everyone to go on this incredible journey with me this season on The Real Housewives of Beverly Hills. It’s been a wild ride so far!”

Denise and Aaron, after the ritual, celebrated a wedding brunch with 15 of their close friends and family.

How did Denise meet her second husband, Aaron?

It was in September of 2017 when Denise and Aaron were first spotted together. Her husband is a Holistic medical expert and it was because of his work that they first came across each other. Apparently, Denise had visited his center.

While recalling their first meeting and intimate encounter, she stated, “So, I met him at his center doing DNA repair, anti-aging, and that sort of thing. Then, one time we had sex in one of his rooms. We’ve been inseparable ever since.”

At the time of their hook-up, Aaron was still legally married to his wife, actress Nicollette Sheridan, although the duo was separated. Their divorce didn’t finalize until August 2018. And just days after, Aaron and Denise got married.

Do Denise and Aaron share any kids between them?

Denise and Aaron don’t share any biological kids between them, however, Aaron did adopt Denise’s daughter, Eloise Joni Richards in May of 2019. Eloise is Denise’s third kid whom she adopted back in June 2011. Richards went through an adoption process of two-years before finally welcoming Eloise.

Besides, Eloise has a rare chromosomal disorder called Chromosome 8, Monosomy 8p. This disorder directly affects her speech. Upon adopting, Denise took care of her as a single mom.

Now, both Denise and Aaron take care of Eloise and also her two kids from her previous marriage with Charlie Sheen.

Denise Richards was first married to Charlie Sheen: How it began?

Denise was previously married to award-winning actor, Charlie Sheen. The duo first meets on the set of Good Advice in the year 2000. However, things started out for the duo until 2001, when they starred in yet another movie, Spin City. Right around this time, they decided to go out. And by the end of the second date, Dennis had a revelation that Charlie was the one.

Consequently, they got engaged in late 2001. Fast forward a few months, and Denise exchanged vows with Charlie Sheen on June 15th, 2002.

Prior to marrying Denise, Charlie was infamous around the world for his bad-boy image. Nevertheless, Denise’s introduction in his life changed him.

Charlie and Denise are proud parents of two kids. They welcomed their first daughter Sam on March 9th, 2004. Though Sam was the firstborn for Denise, it was a second child for Charlie. He had already become a father of one daughter, Cassandra Jade Estevez.

Life was going great for the couple. They became a parent for the second time in June 2005, in the middle of summer. Sadly, when Denise gave birth to her second child, Lola, she was having a divorce battle with Charlie.

After the divorce was finalized, the duo decided to jointly raise their kid. Denise initially filed for divorce when she was 6-months pregnant with Lola. Their divorce finalized in 2006.