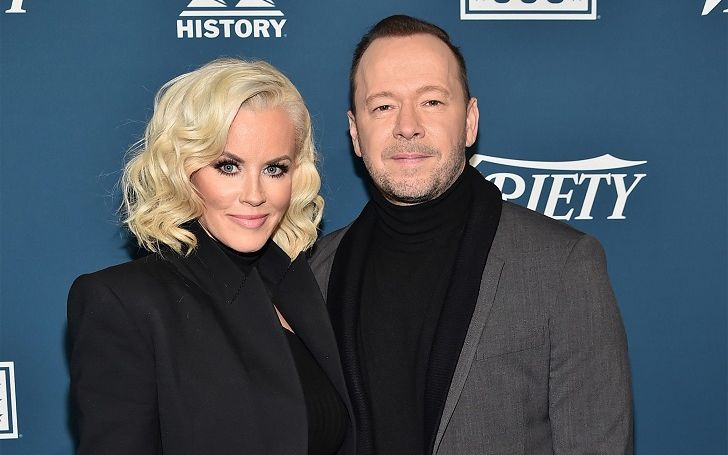 Although his first marriage tragically ended, Donnie Wahlberg is glad after found the love of his life once again. He married the second time to the former Playboy model Jenny McCarthy. The couple who has been together for years is still going pretty strong.

In today’s article, let us find out how well do they bond as a couple? Do they share any children? Let’s take a close look at Donnie’s love life, from scratch.

The member of New Kids on the Block exchange the vows with Kimberly Fey on 20th August 1999. He first came across his then future-wife Kim in the early 1990s. At the time Donnie was looking for a woman who is fluent in Spanish for a record his brother Mark was working on.

In an interview with Chicago Tribune, he described his love at first sight. He said, “She walked in and … wow!”

After some time, the two began dating. Meanwhile, Wahlberg had already gained a lot of popularity in the music world.

Their second kid Elijah Hendrix Wahlberg was born on 20th August 2001. Coincidentally, Elijah came into this world on his parents’ second anniversary.

Donnie and Kim Separated in Early 2008

Despite their years-long marriage journey, their adorable love story ended in a never anticipated way. The two got separated in early 2006 and filed for divorce on 13th August.

But, they filed their documents in different territories. Kim filed for divorce at Los Angeles superior court, seeking sole custody of their two sons with visitation rights for Donnie. She also sought spousal support and attorney’s fees.

On the other side, Wahlberg filed for the annulment of their marriage at Ventura County. Their divorce proceeding came to an end in Sep 2008. The couple is now co-parenting their kids, sharing joint custody of their children.

Kim Fey is a real estate agent who currently works for RE/MAX ONE. She previously worked for some Illinois’ based companies before making her way to Woodland Hills, California.

As for her current relationship status, the 51-year-old is probably single at this moment.

Donnie’s Life After Divorce and Encounter with Jenny McCarthy

Following his separation from Kim, Donnie remained single for a few years before finally found the love of his life a second time in early 2013. The musician met his second wife, Jenny McCarthy, on her eponymous show (VH1) back in late March 2013.

It took them a few months before starting dating in July 2013. On April 16th, 2014, they also announced their engagement on the ABC talk show, The View. Donnie popped the question with the 10-carat yellow sapphire engagement ring.

Wahlberg and his wife McCarthy got married on 31st August 2014. The couple organized their wedding ceremony at the Hotel Baker in St. Charles, Illinois.

The two tied the knot in front of 90-guest including family and friends. But, Donnie’s younger brother Mark Wahlberg couldn’t be there because of the pre-scheduled birthday party of his daughter Ella in Los Angeles.

He later wished the newlyweds in a sweet video message.

Besides, they danced as a husband and wife to the show tune “Edelweiss” from the musical The Sound of Music.

Meanwhile, his younger brother Mark is happily married to model Rhea Durham since 2009.

Donnie and his spouse Jenny don’t have any biological children. But, McCarthy has a 19-year-old son Evan Joseph Asher from her previous marriage with John Asher. He was born on 8th May 2002.

The former couple tied the knot on Sept 11, 1999. Nevertheless, their marriage started falling apart after several years of their togetherness and they eventually divorced in Sep 2005.

Just after a year of their marriage, the two also decided to run their own reality TV series. Donnie Loves Jenny first aired on the A&E cable network on 7th Jan 2015. The series featured Donnie and Jenny’s married life from their nuptials.

Donnie Wahlberg and Jenny McCarthy Are Both Puppy Lovers

They both are animal lovers especially their attachment with dogs is great. Donnie and Jenny adopted two Pomeranian pups named Drogon and Nymeria in early 2019. The two also have two other pooches.

The loving duo currently resides in their stunning house nestled in Chicago with their three children. The sprawling property includes five-bedroom.

Jenny McCarthy Husband: All The Facts Surrounding Her Married Life