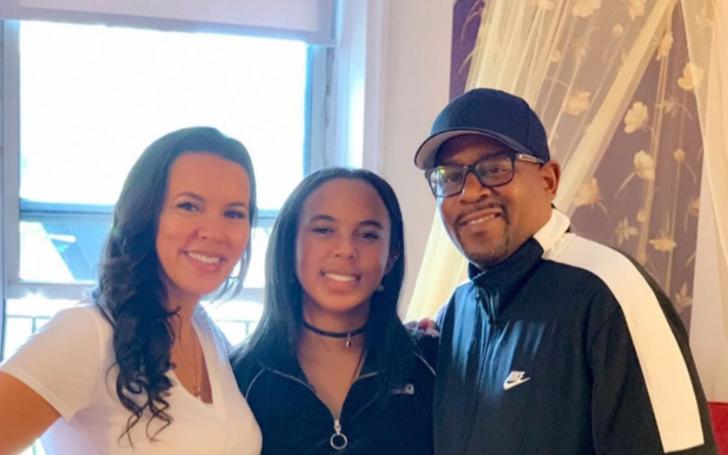 Born to the comedian Martin Lawrence and his second wife, Iyanna Faith Lawrence came to media prominence before she even said her first word. Her dad Martin is one of the most revered comedians out there. He is famous for his role in the Bad Boys franchise.

Well, as of now, Iyanna has grown into a fine young lady. Her mom and dad have certainly won in the parenting department. Aside from herself, Iyanna has two siblings as well.

Today let’s dig out some cool facts about the star kid and find out what she is up to these days.

Iyanna Faith Lawrence is the Second Daughter of the Comedian Martin

She is the first child between Martin Lawrence and his second wife, Shamicka Gibbs. While her dad as we stated before is one of the most renowned comedians of all time. On the other hand, her mother is a TV personality and a businessperson. She is most famous for appearing in the series, Hollywood Exes. Moreover, she owns ten branches of the famous Massage Envy.

Besides, Iyanna is ethnically diverse with her mom being half black, half white, and her dad an African-American.

The star kid spent the major portion of her childhood in Beverly Hills, California from where she received her formal education as well.

She enrolled in the writing program at the Sarah Lawrence College

Both Martin and Shamicka went to the college dorm and assisted their daughter in moving. And just like every parent, Shamicka was teary-eyed when she left her baby girl at the school. She took to her social media handle to announce the big news and wrote a heartfelt message.

Well, dropping your kids off at college isn’t always easy. For decades their voice echoed throughout the house and the next thing you know, they’re gone.

Meanwhile, Iyanna is really into writing as previously, she even attended the writing course at the prestigious Yale University. Safe to say, we might be able to see her work soon.

She has two Sisters

In addition to Iyanna, Martin is a proud papa of two gorgeous daughters, Jasmine Page, born January 15th, 1996, and Amara Trinity, born August 20, 2002. Jasmine is the eldest of the Lawrence kids and Martin shares her with his first wife, Patricia Southall. The former flames were married from 1995 to 1997. Amara, however, is Martin’s second child with his now ex-wife, Shamicka.

Jasmine is a Duke University graduate and an upcoming actress. So far, she has appeared in two movies, Bad Boys for Life (2020) and Family Time (2012). From the three, Jasmine is the only one who might walk down the same path as her father.

Is Iyanna Faith Lawrence Dating Someone?

Going through her social media profile, Iyanna is yet to introduce a lover. It looks like she will be taking her time before jumping into the dating scene.

Just a few years ago, she went to her high school prom with her date, Michael Isaac Blanks. Her mom shared a video in which Iyanna is ascending down the stairs looking all radiant in a golden dress. Her prom date also looked handsome.

Though at the time, many speculated him to be her boyfriend, as it turned out, he was her childhood friend and nothing more.

Iyanna’s mom and dad’s relationship: Stayed Strong Despite their Differences

When a marriage ends, many things tend to change in the lives of both parties. In the majority of the cases, the former flames are not able to extinguish their differences. Thankfully, Martin and his former wife Shamicka were able to mitigate their differences.

Despite being divorced, they jointly raised their daughters. The duo had decided that in spite of their personal problems, they will take care of their kids and never be an absent mother or father.

Iyanna’s parents initially tied the knot on July 10th, 2010, at Martin’s Beverly Hills home. There were around 120 guests in the ceremony among which Denzel Washington and Eddie Murphy were also on the list. Unfortunately, their marital bliss couldn’t sustain for long and they called it quits after a mere two years in 2012.

We all know about the perks of being a star kid. That’s right! You get to go on an exotic vacation, buy anything you want, and more. Similarly, Iyanna also enjoyed a pretty lavish life. And why wouldn’t she? Her father sits comfortably at a staggering $110 million net worth.

Martin earned a major portion of his income from his film works and his investments. He had sold his mansion in Beverly Hills for a whopping $17.2 million and brought a property in Encino, Los Angeles, for $6.63 million.