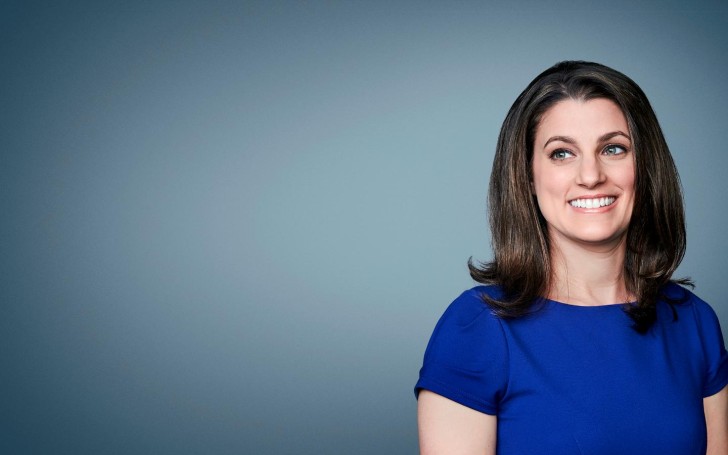 Allison Chinchar is famous across the nation for her work as a Meteorologist at CNN. Apart from that, she is famous as Mike Bettes’ wife, a fellow meteorologist. The lovebirds have been together for around a decade now.

Chinchar rarely gives any glimpse of her personal life. But today we’re going to list out all that you need to know about the CNN weather chaser.

We’ll find out about her education, marriage life, kids if any, her net worth, and more here today!

Who is Mike Bettes’ wife Allison Chinchar? Parents and Siblings

Allison Anne Chinchar was born on September 4th, 1984. As of 2020, she is 36 years of age. Various tabloids claim she was born on April 9th but that is certainly not the case here.

Moving towards her family, she is the daughter of Kellie and Kenneth Chinchar. The reporter belongs to the Caucasian ethnicity and American nationality.

Her father Ken is a Revenue and Sales Leader coach at his own firm. Both of Allison’s mom and dad graduated from Ohio State University. As for her siblings, it looks like she has two sisters but the information cannot be verified.

Besides, her grandmother Ruth H. Crissman Young passed away in 2015. She was one of the attendees at Allison’s wedding.

Allison is an Ohio University Graduate

Since her childhood, Allison knew she wanted to be a meteorologist. Her parents were super supportive of her passion, however, they were afraid at times given the risk involved.

To further her career, she enrolled in the Bachelor of Science program at Ohio State University back in 2003. She majored in Atmospheric Sciences and Meteorology and graduated in 2008.

During her time in college, she was a member of the group, Meteorology Club, Delta Delta Sorority.

Got her first job as a meteorologist intern at WCMH-TV

In 2007, she joined the cast of WCMH-TV as a meteorology intern. Her internship lasted from September to December of 2007. Her main job was to assist the meteorology department and create weather forecast graphs with the help of WSI.

Then in 2008, after her internship ended, she caught the attention of WTVC-TV in Chattanooga. She was hired as an on-camera meteorologist. Her main job was to create and anchor forecasts, create graphics, write, produce, and anchor weekly sign language forecasts.

After her stint at WTVC, Allison went to the WKRN network and then to WXIA TV, where she worked from 2012 to 2015 as a weekend meteorologist. It was around this time when she got an Emmy nod for her coverage of the New Orleans Hurricane.

In June 2015,  she joined CNN and HLN as a meteorologist. Since joining the network, she became a fan favorite. Chinchar appears in CNN’s ‘New Day Weekend’ and HLN’s ‘Weekend Express.’ Her extensive portfolio includes chasing storms, blizzards, covering flooding events, and wildfires.

Allison is a member of AMS (American Meteorological Society), NWA (National Weather Association), and ASPCA. She also once helped raise funds for Atlanta Humane along with her husband Mike Bettes.

Similar to her professional life, Allison enjoys an exceptional personal life. Since 2012, she has been in a marital relationship with Mike Bettes, a meteorologist at The Weather Channel.

According to our research, the lovebirds exchanged vows in September 2012. Their wedding took place in Atlanta, Georgia, and was planned by Brian Green.

Allison and Mike came across for the first time at a weather conference. Mike was the speaker whereas Allison, being a weather freak, attended the conference.

While talking about their first meeting, both of them had something to say. Allison stated, “I liked the weather nerdiness about him.”

On the other hand, Mike maintained, “For me it was love at first sight, honestly. I couldn’t be without her.”

Soon they started dating and got engaged.

Mike Bettes rumored to have been married before?

There are also rumors that her husband Mike was once married to Stephanie Abrams. Stephanie and Mike used to host Abrams & Bettes Beyond the Forecast from 2006 to 2009.

Till now, there has been no confirmation by either of them whether they were really married or not. It is safe to say, these are all rumors.

Besides, Mike also raised many eyebrows when he called meteorologist Maria LaRose his work ex-wife. It was around that time when Mike’s real-life wife Allison hosted a show with Maria. He tweeted the following:

The lovebirds are proud parents of one adorable little man. She gave birth to her firstborn, Landen Benjamin Bettes on January 31st, 2015.

Since his birth, Allison has been juggling motherhood and professional life pretty smoothly. Suffice to say, she is doing a terrific job at that. Furthermore, Allison and her hubby also have one pet dog named Joplyn which they adopted.

Back in June 2013, Mike went to chase down a tornado in Oklahoma with his team.

Unfortunately, the weather was too much to handle for the crew. The tornado ripped through the crew’s car, throwing them some 200 yards away. They were literally 20 25ft above the ground.

At that moment, as Mike recalled, he realized he is going to the heavens. While talking about how he missed his wife at that moment, he stated, “I think that’s the moment everything really slowed down for me and the only thing I remember is her face, like a flash.”

The Weather Channel’s Dave Malkoff took an interview with Mike after the incident. When he asked what he thought about when he was up there, Mike became emotional and choked up.

After he miraculously survived, Allison was more than just elated. With tears in her eyes, she said, “I’m happy he’s home.”

How much is Allison Chinchar Net Worth?