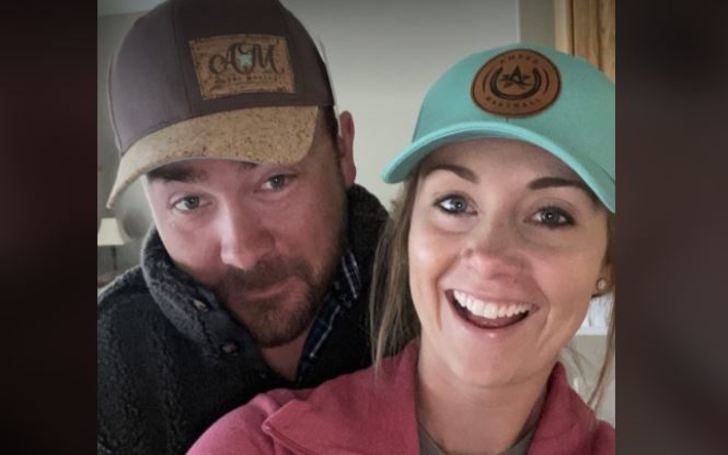 Shawn Turner is the husband of Canadian actress, Amber Marshall. She is known for playing Amy Fleming in the long-running CBC series Heartland. Amber’s husband, Shawn is a rancher and a photographer who married the Heartland actress in the early 2010s. The couple has been together for more than seven years.

Turner’s Ms., for her performance in Heartland, won the inaugural Canada’s Screen Star Award at the 1st Canadian Screen Awards in 2013. She is more than a notable face in Hollywood north.

Despite people’s notion that Marshall is married to one of her Heartland co-stars, she is, in truth, the wife of a rather low-key guy. In fact, as famous as she is, the blonde actress kept her real-life relationship quite buttoned-up. Know all about her husband, Shawn Turner; his life before meeting Amber, his professional endeavors, and many other aspects in the writings below.

Shawn Turner Grew Up Around Horses

Shawn David Turner was presumably born around the year, 1987. He is the son of Ross Millar Turner and Barb Turner. Amber’s husband grew up in a Rodeo family in Okotoks, Alberta, and has had horses all his life.

Is Shawn Turner an actor?

There were rumors for a while that Amber’s husband was also an actor. However, the cowboy’s career is not anywhere near as performing arts. Also, he never made any appearances in his wife’s show, Heartland.

Shawn is a rodeo rider/photographer. Although, it is unclear if he does the former in a professional manner. He is believed to have had participated in some competitions in the past. But as of recent, he hasn’t been seen doing much steer wrestling.

In Oct 2020, Marshall threw a TBT to her husband. The actress uploaded old footage of her husband as a child where he is enthusiastically talking about horses and rodeo.

“My husband Shawn has been involved with horses and rodeo since he could walk and I love these glimpses into his childhood. He might kill me if he sees that I posted this, but it was too cute not to share,”

wrote the 33-year-old actress. He is also a photographer and owns a company, named Shawn Turner Photography.

Shawn and Marshall married on July 27, 2013, in Alberta, Canada in Big Sky Country region. They had gotten engaged in early 2012.

The couple met at a horse trade show. Heartland was between seasons 3 and 4. The date was March 20, 2010, at the CanAm All Breed Equine Trade Show in London, ON.

Shawn’s parents’ rodeo company had sponsored the trade fair. Amber went to get a signing and her future husband was helping with the signings. They met and after talking for some time, the actress asked Turner for a ride back to a hotel.

“And it just kind of went from there,”

revealed the Heartland star in Sep 2013 to CBC. Amber said after meeting Turner, she felt he was cool and wanted to know him. However, by next week, Amber said “this guy is worth having a long-distance relationship.” The Ontario-born actress said they had so many things in common.

He Proposed To His Girlfriend With Her Grandmother’s Ring

She admitted to thinking that she wanted to be with Turner forever. Turner, on the other hand, disclosed that he had asked for Amber’s father’s permission for marrying his daughter. The answer was an enthusiastic “Yes” and he even gave Turner a prized family heirloom, Amber’s great grandmother’s wedding ring.

He confessed he was nervous the days before proposing.

The rodeo, nevertheless, picked up Marshall from the set. The couple then took their dogs up to the mountains. And while on the way came a river by the side of which Turner proposed to the Canadian Screen Awards winner on June 27, 2012.

They Married At A Ranch

Marshall and rodeo enthusiast, Shawn Turner’s wedding took place during a pause in Amber’s shooting
schedule for the seventh season of Heartland. The installment was filmed in High River and the Foothills region of southern Alberta.

They had their wedding at Amber’s father, Mr. Marshall’s A-Ark ranch. The bride said having their big day at a ranch made her feel comfortable as it was where she had spent most of the time. Amber admitted she never had dreamt of having a traditional wedding, walking down the aisle and all. To her, the actress confessed it was about “being with a person you love.”

Shawn Turner And Amber Marshall Had A Western Wedding

On the invitations of their wedding, Turner and Marshall had said no high heels only cowboy boots.
Their wedding, as per Marshall’s mother was 100% western. The bride made an entrance riding on a black horse.
Shawn, as for himself, chartered a helicopter to his nuptial. Shawn, himself custom-built an outdoor altar from local timbers.

After the vows, the bride and groom left through the aisle both riding on each of their horses, Hawk and Cash.

Among the attendees were Amber’s Heartland co-stars, Michelle Morgan and Chris Potter.

The couple both loves animals; especially horses. They reside on a farm SW of Calgary with their many animals. The pair apparently are yet to have children.

Despite Shawn not being as active on social media as his actress wife, the pair are still husband and wife. In fact, Amber can be noted mentioning her husband occasionally on her Insta and Facebook, though she has hardly uploaded any picture with him in recent times.

Did Amy and Ty date in real life?

Although Shawn’s actress wife, Amber (Amy), and her co-star, Graham Wardle (Ty) played each other’s love interests in Heartland for over 12 years, they never developed any such relationship off the screen.

As mentioned, Amber went on to have a relationship with Shawn between the third and the fourth season of Heartland while Wardle married Allison in 2015. The latter couple, however, separated in 2018.

Other Facts About Shawn Turner: