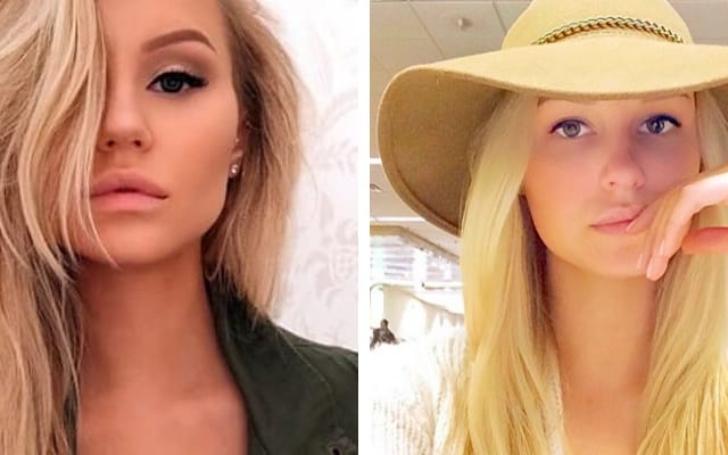 Phil Hartman&#8217;s Ex-Wife Brynn Hartman: Truth About The Mysterious MurderComedia Phil Hartman was loved by many. When news of Phil and his wife’s death came, everyone was utterly devasted. His two kids, Birgen Anika Hartman and Sean Edward Hartman were orphaned, at an age when parenting was necessary.

Thankfully, their maternal aunt raised them, and some two decades later, both of them are doing good. Today we’re here to talk about Phil’s daughter, Birgen Anika Hartman.

What is she up to these days? It is reported that she is a married woman now. Is it true? Let’s find out all the details here!

Birgen Anika Hartman was raised by her Maternal Aunt

The star kid was born on February 8th, 1992, in Encino, Los Angeles. She is the youngest kid of late comedian Phil Hartman and his wife, Brynn Hartman aka Vicki Jo (nee’ Omdahl).

Coincidentally, Birgen came into this world on Saturday so Phil was shooting for SNL at the time. On that day, retired actress Susan Dey was the celebrity guest and she announced the big news live on TV.

Like any celebrity kid, Birgen too had an affluent lifestyle. She grew up in her dad’s mansion in Encino. After the tragic incident befell the Hartman house, Birgen along with her older brother Sean was taken in by their mom Brynn’s sister, Katharine Wright, and her husband Mike.

At first, Birgen and her maternal uncle and aunt lived in Eau Claire, Northern Wisconsin. After a while, they moved to Edina, Minnesota, where Birgen did her schooling.

Birgen’s father Phil died after her mother shot him

It was in May 1998, when the devastating incident unfolded in the lives of Birgen’s mom and dad. Her mother, who was reported to be addicted to narcotics, shot and killed her husband, Phil. And just hours after shooting him, she committed suicide and killed herself with the same gun she shot Phil.

It was one of the biggest travesties of the late 90s. Phil wasn’t just a comedian, but he was a great father as well. It won’t be an understatement to say that the way he died was more tragic. Killed in cold blood by his own wife.

Initially, Phil and Brynn got married in November 1987. They first met on a blind date and soon after meeting, Phil was head over heels for her. Their marriage life was going smoothly but due to his busy schedule, they used to have a lot of fights. On top of that, Birgen’s mom suffered from substance abuse until the end of her day.

Sometime later after their marriage, Phil even told his make-up staff that he and his wife might be having a divorce soon.

Birgen has an older brother: Where is he now? What is he up to?

Phil and his third wife, Brynn became parents for the first time in 1988. They welcomed to the world, their first kid, Sean Edward Hartman. At the time of his parent’s death, he was 9-years-old.

Unlike his sister, who is quite active on social media, Sean remains behind closed doors. However, he has found a suitable career for himself. At the moment, he is pursuing a career as an artist and musician. As of this moment, he resides in Oakland, California.

He too graduated from Edina High School. His passion for music started right then as he joined a band named Metamorphosis Mexico in high school. Later on, he also took up visual arts.

Birgen, despite the odds, graduated from college and made a stable career. Upon finishing high school from Edina High School, she earned a degree in Communications and Journalism from the University of St. Thomas.

Although she is still a star kid, it never stopped Birgen from trying her hands in regular jobs. So far, she has worked as a barista, a sales associate at an athletic store, did data entry for TCF Bank.

Apart from this, she also spends a lot of doing volunteering. She is a staunch animal rights activist and even served as a volunteer for Caring for Cats.

Who is Birgen Anika Hartman husband?

After what happened to her family, it is hard to believe Birgen came out stronger. Not only did she graduated from college, but she also found the love of her life and happily married.

She exchanged vows with her hubby, Brandon, on September 30th, 2018. Their destination wedding was held at Villa del Balbianello, Tremezzina CO, Italy. Around 200 guests attended the beautiful wedding ceremony.

Fun fact about the wedding location, movies like James bond: Casino Royale and Star Wars Episode II The Attack of the clones are some of the movies which were shot in the location.

The couple got engaged back on January 23, 2015. She announced the big news by sharing a picture of the big rock Brandon gave.

As for who her husband is, well, there is no information about him. Even though Birgen shares all the intricate details about her personal life on social media, she still refrains from speaking up about her spouse.

Besides, both of them look lovely together. Many of her friends approve of her relationship with Brandon. In fact, Birgen and Brandon have even started their own business as well. All in all, Phil Hartman’s daughter is in a good place, both personally and professionally.

It’s not surprising to find out that Birgen was once a drug addict. A majority of youngsters often get into this dark void that is substance abuse. Millions of people suffer from some sort of addiction in the United States. And given her tragic past, it looks like Birgen too sought solace in drugs.

Thankfully, things turned out different later on as Birgen became drug-free. In 2018, the star kid opened up about her struggles and posted a Teenage Mutant Ninja Turtle graphic and wrote, “Drug dealers are dorks. Don’t even talk to them.” In the caption, Birgen wrote, “? 6 years drug-free today! ? Thanks for the advice, Donatello!”

Previously, she also talked about her mental problems as well but not as openly. She hinted about it in a post in which she wrote, “If I can make it through the week without a full-blown-2007-Britney-Spears mental breakdown then I’m basically invincible.”

Well, we’re glad this is all behind her and Birgen is enjoying a fruitful life.

Birgen Hartman Net Worth: She inherited half of her parent’s fortune

As of now, Birgen’s net worth is easily over $1 million. The majority of her wealth came from her parent’s wealth, half of which was transferred to her after they died. The other half was given to her older brother Sean.

Back in 1998, Phil’s estate was valued at a whopping $1. 23 million. In order to give their kids enriched lives and not spoiled one, the money was to be given in three installments like payments.

One-third of the money will be given when they turn 25 or complete a bachelor’s degree, another half after they turn 30, and the remaining as soon as they turn 35.

In addition, the legal guardians, who would take care of their kids will receive $50,000.