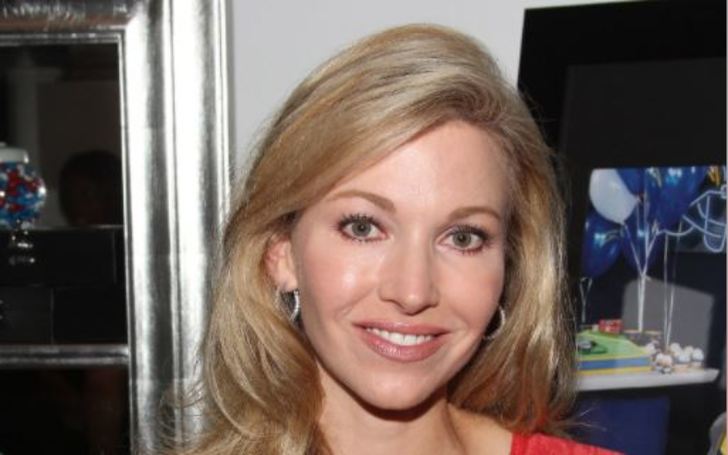 Tavia Shackles is a sports celebrity, glamour enthusiast, and philanthropist. She is better famous as the longtime wife of the NFL Kansas City Chiefs chairman and CEO, Clark Hunt. The couple has been together since the early ’90s with three children in between.

While her businessman husband often steals the spotlight be it at any sporting event or other places, Tavia Hunt is also not one to sit back and take in the action from the sidelines. Throughout her 24-year marriage to Clark, Shackles has taken on roles of leadership and mentoring, contributing to her beloved team, her family, and the legacy that is the Hunts.

Know in detail how she factors into Chiefs’ legacy, an uncut side of her history, how she met her husband, and also some additional facts with respect to her personal life.

Tavia Shackles Is A Missouri Native

Shackles was born Tavia Michelle Shackles to mother Ramona Lakin Shackles and father David Shackles on August 1, 1971. As of 2022, she is 51 years old. She grew up in Lee’s Summit, Missouri.

Future Ms. Hunt is the granddaughter of a nondenominational pastor. She grew up in a Christian environment that has deeply influenced her to date. In fact, Tavia Shackles has always been a devout Christian.

As for education, she pursued a degree in Political Science from the University of Missouri. Her family still lives in Lee’s Summit.

Tavia Shackles has always been a Chief’s fan. Growing up she was a ‘Raider-Hater’ from watching games with her dad from a very young age.

Tavia Shackles Won Many Beauty Pageants From An Young Age

Shackles started to compete in beauty pageants from a young age. It was her neighbor who had recommended her to participate in such events. Her first win was Miss Lee’s Summit. She next won Miss Missouri Teen USA in 1990.

She then went on to compete in other pageants, eventually taking the crown of Miss Kansas USA in 1993 and finishing as the second runner-up in the Miss USA contest, the same year.

At the 1993 Miss USA competition, the graduate of Lee’s Summit High School clinched awards for Best State Costume and the Most Beautiful Eyes. She was then 21.

Later, her work in pageantry honed her skill for fashion and building a polished look.

She Currently Serves In The Kansas City Chiefs

At present, Shackles oversees the Chiefs’ Women’s Organization. She has been doing so since her first encounter. With the organization, she launches and conducts events to plug Kansas City Chiefs into serving in the community.

She does so in the hopes of feeding the hungry or building homes with other organizations like Habitat for Humanity and Harvesters.

Some of her other organizations also serve the homeless at various soup kitchens. Tavia additionally is the director for the Chiefs’ Women’s Organization. She also is influential in guiding and supporting the wives and girlfriends of players.

Hunt’s partner takes an active role with the Chiefs’ cheerleading squad, from overseeing the calendar to judging the tryouts and even designing the uniforms.

The sporting director also says it’s fulfilling to her when she mentors young women, enabling them to gain self-awareness and self-confidence. Further, Tavia Shackles also serves on the board of directors at Baylor.

In addition to promoting the Chiefs’ brand, Shackles is also equally into charitable causes. The wife of Clark Hunt is a huge believer in giving back to the community.

The former pageant winner once admitted that she finds her accomplishments while doing service in the Dallas and Kansas City communities, raising money for important causes.

Shackles married Kansas City Chiefs chairman and CEO Clark Hunt on October 23, 1993. With that, she became the daughter-in-law of Chiefs, AFL, and MLS founder Lamar Hunt.

Tavia Shackles was 19 and had just finished her sophomore year, interning with the Chiefs. It was then that she first encountered her would-be husband, Clark Hunt.

“We met at the Chiefs’ kickoff luncheon. It’s ironic because my mother-in-law, Norma Hunt, met Lamar as a volunteer teacher for the team, also at a luncheon. They were married for 42 years.”

She was 22 when she married Clark. Shackles had just graduated from UMKC.

Her Super Famous And Super-Rich In-Laws

Her father-in-law Lamar Hunt was the founder of the American Football League and Major League Soccer as well as the Kansas City Chiefs and the Kansas City Wizards, which later became Sporting Kansas City.

In earlier years, Lamar Hunt’s AFL was the NFL’s chief rival. The two later merged with the league and jointly became the American Football Conference.

It was also Lamar Hunt who coined the term “Super Bowl.” Her spouse, Clark Hunt is also the grandson of H.L. Hunt. Tavia’s husband’s grandfather H. L. Hunt was an oil tycoon and at one time one of the wealthiest men in the United States.

Shackles’ partner, Clark, himself is part owner, Chairman, and CEO of the Kansas City Chiefs and a founding investor-owner in Major League Soccer.

Tavia Shackles’ Has Three Children With Her Husband

With her husband Hunt, Tavia is the mother of three children – Gracie, Knobel, and Ava. She had her first child, a daughter, Gracelyn Hunt aka Gracie Hunt on March 29, 1999. Her daughter Gracie also won Miss Kansas USA in 2021, 28 years after her mother won the pageant.

Tavia and Clark’s second child, Ava Hunt was born on March 29, 2006. She is also a beauty queen pageant. She was the 2018 Miss Pre Teen Texas International.

The Hunt couple’s only son Knobel was born in July 2008 and is a former student of St. Marks and a defender for the FC Dallas team. The Hunts family resides in Dallas.

How Rich Is Her Husband?

For a billionaire such as the husband of Tavia Shackles, there simply is no one way or a definite approach to breaking down Clark Hunt’s net worth.

To say in one go, he is worth over $2 billion, but there’s always more to it. The father of Shackles children has been around wealthiness since before he was born. So how did he and his family get so rich?

While he may have added to the NFL Dynasty with the Kansas City Chiefs, his family, the Hunts fortune dates back to when his grandfather, H.L. Hunt became an oil tycoon in the early 1900s.

To start, he purchased several lands across the country and one of the Texas parcels of land Clark’s grandfather bought in 1930 happened to sit atop of a massive oil field. His father, Lamar from the benefit of his family fortune made the 1982 Forbes 400 list of the richest Americans.

Tavia’s in-laws, the Hunt family has a net worth of close to $20 billion.

Clark also owns the FC Dallas soccer team and a minority stake in the Chicago Bulls. Within the massive number of properties, some extravagant aspects to consider are a handful of golf courses, several million-dollar residencies, some jets, and so on.