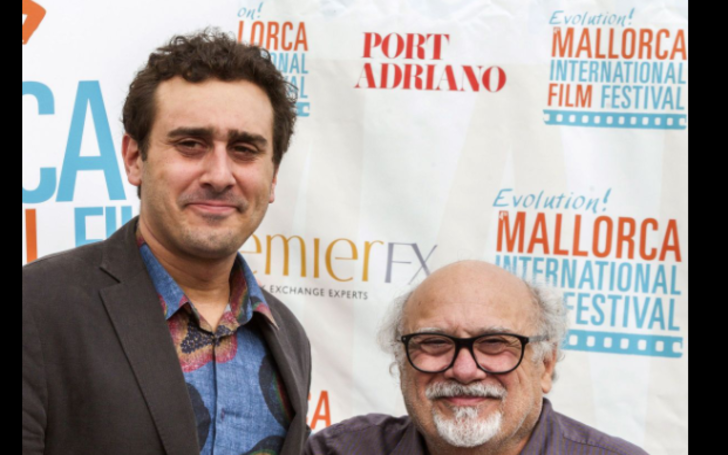 Jake DaVito (Jacob Daniel DeVito) is the son of veteran Hollywood star, Danny DeVito and his former actress wife, Rhea Perlman. DeVito’s father is famous for appearing in some of the hit films of the 80s and the 90s. Jacob is the youngest child and the only son of DeVito’s three children.

It’s been a while since Danny and Rhea’s kiddos became all grown up. Some are already into their 40s. While not as famous as his father, upon reading one can find, the junior-most DeVito, Jacob has contributed to several films whilst remaining behind the camera.

Know all about his work, his personal life, and many more in the following details.

Jake DeVito was born on 10 October 1987. He grew up in New York alongside his sisters Grace and Lucy DeVito.

He is an Italian from his actor father, Danny DeVito. Daniel’s paternal grandfather, Daniel DeVito Sr was a small business owner, and his grandmother was Julia DeVito (nee Moccello). Jake’s paternal ancestors were originally from San Fele, Basilicata, as well as Calabria.

From his mother’s side, Jake holds Polish ancestry. His maternal grandparents, Philip Perlman, a Polish immigrant, was a manager at a doll parts factory, and his grandmother was a bookkeeper. His mother grew up in Bensonhurst in a Jewish family with additional roots in Russia.

His father, Danny Devito is an actor, comedian, director, producer, and screenwriter. He is famous for his portrayal of the taxi dispatcher Louie De Palma in the television series Taxi (1978–1983), which won him a Golden Globe Award and an Emmy Award. The Hollywood Walk Of Fame star plays Frank Reynolds on the FX and FXX sitcom It’s Always Sunny in Philadelphia.

Throughout his career, Jacob’s pop, Danny has appeared in hits like One Flew Over the Cuckoo’s Nest, Terms of Endearment, Romancing the Stone, Throw Momma from the Train, Twins, and The War of the Roses.

Further, his modern-day features include Big Fish, Deck the Halls, Wiener-Dog, Dumbo, and Jumanji: The Next Level.

Much like his father, Jake’s mother, Rhea is also a famous actress and a writer. She has received ten Emmys and seven Golden Globes nominations. His mother, Rhea Jo Perlman, born 31 March 1948 is known best for her portrayal of the lead character Carla Tortelli in the comedy series “Cheers.”

The role which helped her gain more recognition was in the sitcom “Taxi”, as Zena the girlfriend of Louie De Palma played by her husband Danny. Her other film credits include There Goes the Neighborhood, Carpool, and Love Comes Lately. Daniel’s mother, Perlman’s most recent role has been in the romantic comedy series “The Mindy Project” in which she appeared from 2014 to 2017.

Rhea is also an author, having published six books in the children’s series “Otto Undercover”.

Jacob’s father, DeVito, and Rhea first met in 1971 when the latter went to go see a friend perform in the Shrinking Bride. Danny was also in the play. The two got to talk to each other through mutual friends and their romance began shortly after.

They married on January 28, 1982, and remained husband and wife until 2017. During their marriage, they became parents to three children Lucy Chet Devito, Grace Fan Devito, and Jacob Daniel Devito.

Perlman and the Twins star separated in October 2012, after 30 years of marriage and over 40 years together. They, however, reconciled in March 2013 before again separating in March 2017. After their last split, Daniel’s parents remained on amicable terms. Perlman stated they had no intention of filing for separation.

In 2019, she told interviewer Andy Cohen she and DeVito have become closer friends after their divorce than they were in their final years as a couple.

DeVito’s Sisters Are Also In Hollywood

Jake DeVito’s eldest sister, Lucy, born, March 11, 1983, pursued a career in showbiz and has quite notable credits in films and series like The Marvelous Mrs. Maisel, Shameless, Can You Ever Forgive Me?, Deadbeat, and many more.

She has also produced the short film Curmudgeons and is currently working on the upcoming FXX’s flick Little Demon. In addition, Lucy has appeared alongside her actress parents in several films like Juman 2019, The Comedian 2016, and in the off-Broadway play Love, Loss, and What I Wore.

The Quicksand producer’s other sister and DeVito’s second child, Grace, born on March 25, 1985, is also an actress. Although she has fewer credits than her older sister, Lucy, or her famous parents, she has acted in 2015’s Amboy, 2007’s Bloom, and 2006’s My Girlfriend’s Abroad.

He Has Worked Behind The Project Of Several Hollywood Movies

Jake DeVito kicked off his acting career via the role of David Lekkas in the drama movie “Pieces of a Dream.” The Skee Skinner directorial starred Harold Dennis, Ngina James, and Paul Branton. The movie tells the lives of four people: a priest, a young mother, an artist, and a young boy.

The eldest son of Dany and Rhea, however, is perhaps best known for his seven producing credits. DeVito made his producing debut with the 2014 biographical historical movie, The Better Angeles. The A. J. Edwards helmed film bagged two awards. The same year Jake produced both the short film “Quicksand” and the documentary sports adventure “Fair Chase”.

Two years later, in 2016 he produced the short comedy film Curmudgeons (where his father also acted), and in 2020 the short comedy, Wererock. He recently completed the thriller movie St. Sebastian and is currently working alongside his sister and father on the animated horror-comedy Little Demon.

While his IMDB page doesn’t tell much about Jacob’s life besides his brief career, his Twitter handle does have a few personal stories and narrations.

The semi-secretive star’s Twitter showcases his Hollywood connections as well as adorable interactions between the filmmaker and his family.

Daniel’s tweets range from “Yay Pop, congrats on the Tony nomination!” to retweets of snapshots of the ‘Curmudgeons’ premiere and press activity.

The youngest child of Danny DeVito hasn’t been as active lately (‘Curmudgeons’ came out in 2016), but Jake’s feed includes everything from endorsements of Bernie Sanders to blog posts from mom Rhea. In the meantime, he’s been known to share the occasional food pic. Accordingly, it is unclear if Jake is married or if he has a girlfriend.

How Much Is Jake DeVito’s Net Worth?

As per the sources, Jake has a net worth of around $1 million. On the other hand, her father is far richer with a net worth of over $80 million as per Celebrity Net Worth.