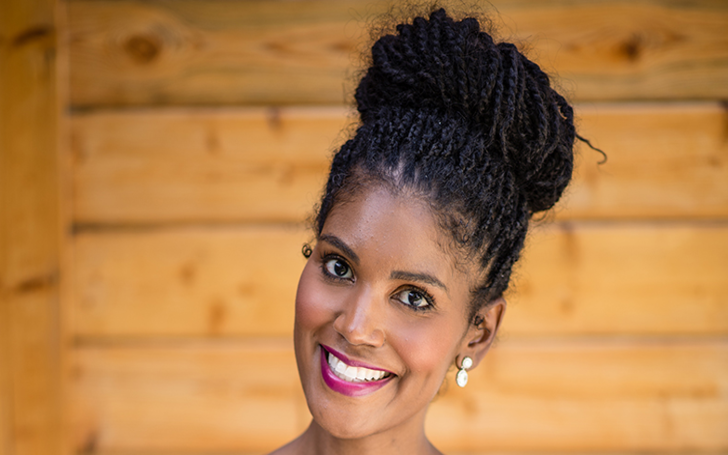 Denise Boutte (nee, Denise Joseph) is an actress and a model, who is known for her roles as Trina in the films Why Did I Get Married?, as Mandy in Death Valley: The Revenge of Bloody Bill. She has also starred in the sitcom Meet the Browns as Sasha Brown.

What few might know is that there’s so much more to Boutte than her acting. She is also a successful entrepreneur, who has managed to produce the TV series Bronx SIU, established herself as a celebrity chef, and promote her new cookbook and a full line of “Weeziana Girl” seasonings whilst also tackling the Hollywood schedule.

Get an in-depth uncut look at her evolution as a woman in the industry and her new cooking empire.

Denise Boutte Was A Homecoming Queen

Boutte, a Capricorn, was born on January 19, 1982, in Maurice, near Lafayette, a small town of less than 700 in Louisiana. She was valedictorian of her High School Class as well as a Homecoming Queen. Her ride to school took an hour and fifteen minutes. As a kid, she used to eat sweet potatoes with “nearly every meal”.

Denise, who grew up Catholic, is a graduate of Louisiana State University, Baton Rouge. She initially began LSU with a Microbiology, Pre-Med major but later pursued and got a degree in Mass Communications, minor in Marketing, graduating top of her class. The Southerner is a member of Alpha Kappa Alpha Sorority, Inc.

Boutte’s Family Had Plenty Of Livestocks; People Often Mistake Her For Ethiopian

Denise’s family originally from Vermilion Parish, Southwest Louisiana had a thriving farm with plenty of livestock and acres of soybeans and Sugar Cane. She even considers herself a true Queen Sugar. Boutte’s dad was an appliance repairman, and her mother cooked for the Head Start program.

Her mother survived breast cancer; one of the reasons why she agreed to star in Her Only Choice. She lost her father when working on Meet The Browns.

As a kid, Boutte would pick the eggs and do some of the feedings. Most of the family vegetables they grew themselves.

When she moved to California, people would frequently ask her if she was everything from Ethiopian, to Trinidadian, to Barbadian. She, however, time and again, has declared herself a Creole, though, she admits not even in her 30s had she achieved fluency in the language.

Boutte, the daughter of Betty and the late Nelson Joseph, admits while growing up, all she dreamt about was getting off her farm in Louisiana and leave. She though is thankful for having spent her early years in her hometown.

“That forms the foundation of who I am. I wouldn’t be the same person I am today now if it weren’t for that,”

Growing up in the small town of Maurice, Denise Boutte initially dreamed of becoming a doctor but later opted to divulge into Hollywood. With Starry Mag, Boutte admitted she wanted to go to a medical school. She explained the aspiration grew because the profession was the only thing her neighbor deemed successful.

After attending a couple of communications classes with a friend and a discussion with a counselor, Boutte decided to change her major and shifted to journalism.

Why Did She Quit Journalism?

In an interview with Soap Opera, the North Vermillion High School graduate revealed she picked Journalism after college and interned for a year and a half. However, her first story turned out to be the primary reason she would ditch the field.

The Southerner said she went on her first story because there was no one else to cover it. It wasn’t what she expected. A man had just lost his life after hitting a power line. Her Only Choice actress explained how much she didn’t want to interview the man’s child. Her producers, nonetheless said, ‘Get the story. Get the story.’

She remembered the kid had no idea his dad had passed away. Shortly, after that experience, she told the network she was going to finish her internship and was eventually out the next day.

After that, she shifted to advertising, and Denise, the lover of Southern food, quickly climbed the ranks first as an account executive, then manager at leading Dallas, Texas-based advertising agencies. There she would tend to the clients of various brands including Pampers, Fossil, Mary Kay Cosmetics, among others.

How Denise Boutte Got Into Acting? Landed Two Parts With One Audition

While overseeing commercial and photo shoots for her clients‘ campaigns, Denise got to meet life on-set and developed a fascination with the endless possibilities of this new world. Several different advertising agencies and several of her clients wanted her to be in front of the camera.

After a local talent agent approached her, Denise found herself in front of the lens for a variety of print and commercial campaigns. Ironic enough, the client, who was assessing one of her office’s models wasn’t finding her fit for the job. He then noticed Boutte handling executive business; he asked her boss if she would pose for her. The Boot State native initially hesitated but later agreed.

So, a chance introduction landed her a talent manager in Hollywood, and the former student of LSU decided to pack her bags and head West.

She had auditioned for Perry’s Meet The Browns. Boutte, who was previously on Days Of Our Lives, got a call-back. After that Tyler, himself read with her, then shook her hand and offered her the roles in the series as well as on the movie, Why Did I Get Married? Denise considers it to be the greatest moment of her life.

Not long after, Denise emerged as one of Hollywood‘s busiest new faces. She bagged guest and recurring roles on an array of television TV shows.

The LSU graduate kicked of her theatre career in April 2004 starring in the play The Tangled Snarl opposite Mary Beth Evans and Arianna Zucker. The Pasadena, California drama had director, James Reynolds as its helmsman.
Boutte made her screen debut in 2007 Tyler Perry’s comedy-drama film adaptation, Why Did I Get Married?
Then in 2009, she reunited with Perry and started portraying the role of Sasha Brown in his sitcom, Meet The Browns. Boutte was on the show until 2011 having credits in over 135 episodes.

She managed to impress director Perry who then went on to create the character of Sasha Brown, the fun-loving yet convicted voice of reason on the highly rated and now syndicated TV series, Meet the Browns.

After Meet The Browns, Denise provided her voice for the 2013 Cartoon Network’s superhero animated television series, Young Justice, from the creators, Brandon Vietti and Greg Weisman. She rejoined the show in 2019 and has been with the network ever since. Boutte audios for the character, Rocket aka Lynn Stewart-Pierce.

In 2017, the former Homecoming Queen played Victoria Campbell in the movie called Secrets, directed by Juan Lee. Her last film credit was in the 2018 feature, Her Only Choice (director, Christel Gibson) as Tasha. The film received a Satellite Award nomination for the Best Motion Picture Made for Television.

In addition, she also has roles in films like Extreme Movie, Never And Again, Bounce Back, For The Love of Ruth, and recurring credits in IFC’s Stan Against Evil (which the AMC canceled after three seasons). Also, Boutte has multiple films and television concepts in development under her Imagine That Productions, Inc. banner.

When asked who was her acting influences, Denise responded,

“I so admire and respect Mindy Kaling, Meryl Streep, Denzel Washington, The Rock for their talent, as well as humanity. When you see the success in game changers like Black Panther, while it did have recognizable faces, so many “unknowns” stepped into that light, stole the show and thanks to epic material and chemistry, RAN with that bad boy, months later, still shattering records and making history.”

Accordingly, the actress turned chef said she was beyond confident that she would be the next, who people will look at and say “Who’s that girl?”

She finds herself blessed to be part of the “Be the change you want to see” movement, with respect to diversified casts and content on both the big screen and small.

Denise Boutte Cooks And Is The CEO Of A Culinary Business; Has An Online Cooking Show

In addition to an acting career, Denise is the owner of Weeziana Girl, a culinary shop in 8306 Wilshire Blvd St. 1711, Beverly Hills, CA 90211. Her business offers spices/seasonings and recipes for Creole Cuisine. The raven-haired actress has also co-authored a southern cookbook, Southern Modified, alongside the master chef, Chef Jernard Wells.

Boutte revealed the time when she had just had her child and nothing else to do was the biggest influence behind her culinary endeavors. For her cooking was relaxing and served as a source for childhood memories and nostalgic moments from the past.

Boutte Is Married To Kevin

The Young Justice star Denise has been married to Kevin Boutte since 2003. Her husband grew up near New Iberia, Louisiana. Boutte met Kevin at a Junior Daughters/Junior Knights Catholic teen talent show in Lafayette.

When Denise’s aspirations needed her to move to California, Kevin was working in a hospital in Dallas. Because of work obligations, her husband came to the Golden State only after six months of his wife’s relocation. Before that Boutté was living with her manager, a former actress she met in Dallas.

While a blissful family, she rarely posts photos of her personal life but openly shares about her hometown. The author has made it clear that she is quite private and “that’s by choice.” She says her family is her refuge, her solace, which she likes having to herself.

Has one daughter Jordan. While discussing her motherhood, the chocolate-skinned actress said she prefers to empower her baby girl with positive examples of independence and work ethic.

Boutte explained she wants nothing more than to raise Jordan as a beautifully well-rounded, confident, self-respecting young lady. She added that she’s been raising her up with a secure sense of self and identity and in love-filled surroundings. Ironically, she had never babysat before the birth of her daughter, Jordan.

Boutte Loves The Subtle Art of Not Giving a F*CK

The Cajun currently resides in Los Angeles owing to her hustle. She, however, is proud of the Southern ethos of hospitality and shooting it straight. Boutte says LA’s world of fake smiles and empty promises helped her stand out through the film industry. Her favorite book is Mark Mason’s, The Subtle Art of Not Giving a F*CK.

Has She Retired From Acting?

Fans last saw Boutte the culinary queen in AMC’s horror-comedy Stan Against Evil; again as a recurring character. The studio, however, pulled the plug out after its third season.

Denise considers the cancellation of her show, Stan Against Evil was a blessing in disguise. Although she admitted she was hurt with the network’s decision, in the hindsight, Boutte explained it gave her a chance to reevaluate herself and find out how she was moving through life and her career.

Boutte, however, assured that she would be there as long as the character intrigues, inspires, gives her something interesting or even unexpected to “sink my chops” into.

In the meantime, she’s working on her next cookbook whose title, though, is yet to be declared.

The One Thing People Don’t Know About Denise Boutte

Boutte claims she is an introvert contrary to what people think of her. She has made it clear that unless they’re one of the chosen few who authentically intrigues her, she is totally fine in her own space. Boutte also admits she loves to go shopping, movies, lunches, and rollerblading; all on her own.