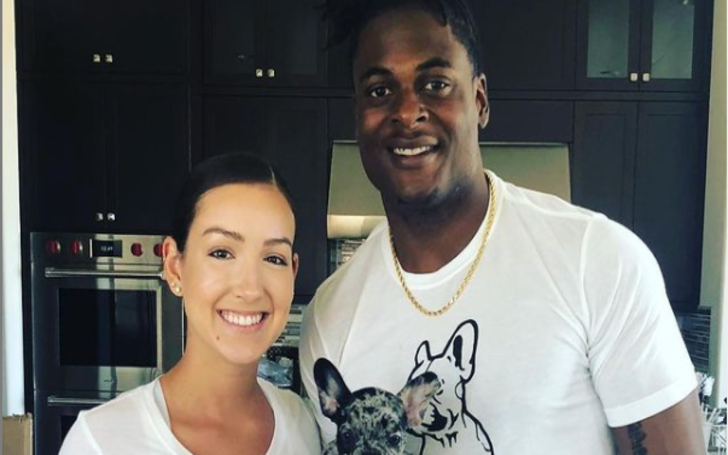 Devanne Villarreal is the wife of the Green Bay Packers’ wide receiver, Devante Adams. With Adams Devanne shares a daughter whom the couple recently welcomed. The pair have been together since their college days.

Know how Villarreal is handling her mom and wife job now that her footballer husband’s contract is nearing its end date. A situation that has raised a lot of attention from other NFL teams to bag Devanne’s partner for the upcoming season.

Also know all about Adam’s wife, Devanne Villarreal; her early life, career, family, and much more in the content below.

Devanne Villarreal’s Bio and Family: She Used To Be A Cheer Girl

Devanne Villarreal was born on January 14, 1993, in Salinas, California. She is the daughter of a Mexican father, Gustavo Villarreal. Her mother, Barbara Davis is a former fitness model.

She has five younger siblings; brother Logan Vonne, who is a TikTok star. Vonne also served as a wide receiver/cornerback for Alvarez High School, from where he graduated in 2017.

Devanne’s sister Alyssa Esparza, is a makeup artist. Her other siblings are Nate, Celeste, and Christopher; her brother Nathaniel “Nate” graduated Valedictorian. He is studying aerospace engineering at UC San Diego.

Adams’ spouse, Devanne is currently an esthetician, skincare specialist. She used to be a cheer girl for Steinbeck Tigers, Salinas, California.

Talking about her ethnicity, the celebrity spouse is Mexican-American and belongs to American nationality.

Devanne Villarreal Relationship With Her Husband, Devante Adams and Their Wedding

Villarreal and Adams are together since college. They first met each other when both of them were students at Fresno State University in California. Devanne first made her public appearance with Adams during the 2014 NFL draft.

They married on June 23rd, 2018, in the romantic setting of the beautiful Bahamas. The groom wore an elegant classical black coat-and-tails, while Devanne embellished herself with a white satin strapless gown with a cathedral veil.

Some sources claim they also had a reception/wedding at Pebble Beach in Monterrey County, California. Among the guests were Packers’ teammates and Davante’s former Fresno State teammate, Derek Carr, the quarterback for the Las Vegas Raiders. Additionally, the Packers main man, Rodgers, himself was present to wish the couple.

The Adams couple had their honeymoon in Santorini, Greece.

It was in the Bahamas that Davante had proposed to Devanne after luring her there on false pretenses.

The wide receiver told his then-girlfriend that they had to go to the Caribbean paradise for a photoshoot. After reaching the place on July 6, 2017, he dropped to his knees and asked the question to which Devanne said yes.

Devanne Is The Mother of Two Children

On July 4, 2019, Davante dropped the big news that he and Devanne were expecting their first child. The football player revealed in a shower of pink confetti that the new addition to the family would be a girl. Sharing the excitement and the gender, he wrote:

“Baby Girl Adams? #TheAdamsFamily is getting a little bigger this September! Can’t wait to meet our baby girl.”

The news came after the Packers’ Week 3 victory over the Broncos. Green Bay Press-Gazette’s Ryan Wood said the wide receiver missed a Packers’ training to be with his wife for the birth of their child.

The father admitted he had become even more driven on the field and more ambitious after the birth of his daughter. The Packer says he now has something even more important to fight for: his baby girl.

The family of three resides in Fresno, California.

Although Davante has emerged as one of the top wide receivers in the NFL, his wife, Villarreal notes that not much has changed. Devanne asserts her husband is still the same person he was when she first met him.

Devanne explained to Bleacher Report that he doesn’t act like a celebrity and how he’s the same old Davante.

Coming out of Fresno State, Villarreal’s partner did not enter the NFL with the acclaim of some of his peers. For him, it has been some journey to becoming the top receiver for one of the most storied teams in the NFL.

With Bleacher Report, Devante told he’s been through everything and nothing could faze him anymore. He added one has to appreciate the slow grind because success is not going to happen overnight.

Behind Her Husband’s $58million Contract

In 2017, Villarreal’s husband made headlines when the Green Bay Packers signed him to a four-year contract extension worth $58 million. The deal then earned Adams $18 million in signing with $32 million in the first two years of the agreement.

The contract then made Adams the fourth-highest paid wide receiver, behind Antonio Brown ($17.0 million), DeAndre Hopkins ($16.2 million) and A.J. Green ($15.0 million). The accord promised him an average annual salary worth $14.5 million.

What’s more, insiders project the Packers are going to have to pay him a big-time or face the real possibility of losing the star receiver in free agency following the 2021 season. In fact, those around the NFL believe that his next deal will make Adams the highest-paid wide receiver in the NFL.