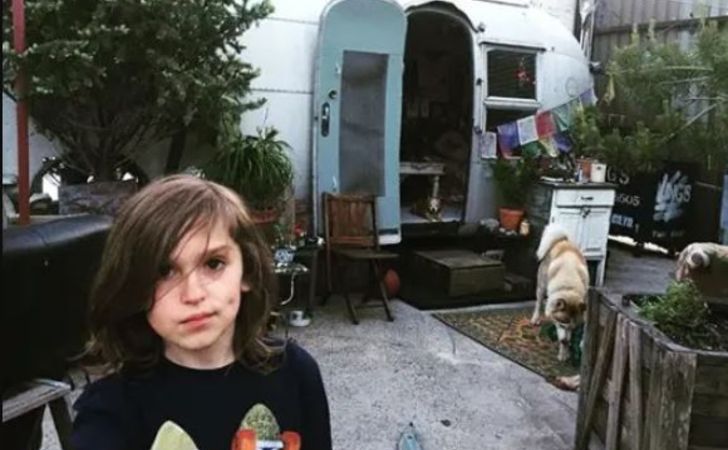 Cassius Riley is a 13 years old teenager famous as the son of English-American singer Domino Kirke with ex-partner Morgan O’Kane. He was born in 2009 as the first child of the singer.

Well, his mother is currently married to Penn Badgley, the lead actor from the Netflix series You. But why did his parents separate?

Here are some interesting details you should know about Morgan O’Kane’s first child.

Cassius Riley Was Born in 2009

13 years old, Riley has a decent family background with a decent dominance in the media. He is the grandson of English drummer Simon Kirke and his wife, Lorraine Kirke.

Cassius Riley is Close to His Father

Riley’s father, Morgan O’Kane, doesn’t appear in the media more often, so his lifestyle and relationship with his son might be out of your sight. But he is an adventure-loving man with whom Riley shares a close bond. He loves spending his vacations on adventures with his dad.

We can see Riley going on hikes, rock climbing, and several other trips with his dad on O’Kane’s Instagram. In most of the photos, Riley, 11, can also participate in some breathtaking adventures along with his father.

Cassius Riley is a Nephew of Actresses Lola and Jemina Kirke

Cassius Riley is the nephew of actresses Lola and Jemina Kirke. Jemina is an actress and director who rose to prominence following her performance as Jessa Johansson on the HBO series, Girls. Besides, she has worked in some famous films like Untogether, Tiny Furniture, and The Little Hours.

On the other hand, Riley’s aunt, Lola, is an actress and singer/songwriter. Lola is known for her work in the Amazon Studios TV series Mozart in the Jungle. Besides, she has worked in films like Another Happy Day, Gemini, Viper Club, and American Woman.

His Mother Married Penn Badgley after Breakup From His Dad

Singer Domino Kirke met singer Morgan O’Kane in 2007. They started dating shortly after their first meeting, and within a couple of years, they welcomed their first child. Domino was in her mid-20s when she became a mother. In an interview, she said she was 25 years old when she became pregnant. She added she was the first one to get pregnant among her siblings.

Kirke and O’Kane separated in the early 2010s when Riley was still an infant. However, the exact date of their separation is not available. Meanwhile, the ex-pair has never talked about the reason for their separation in the media. But Kirke wanted to pursue a career as a Doula following her son’s birth, which might have brought conflicts between the couple.

As of now, Domino Kirke is happily married to actor Penn Badgley. They started dating in 2014, and after three years of courtship, they got married on February 27, 2017.

Riley’s Mother is a Doula

Cassius Riley’s mother, Domino, rose to prominence as a singer. But, she changed her profession and became a doula in 2009. In an interview with Hey Mama, Domino revealed that she always had a plan to become a midwife. She had planned to do midwifery if her music career wouldn’t work. And after she gave birth to her first child, Cassius, she said she was really pushed to start her journey as a Doula.

She had been practicing Doula solo for a while, and then she met Samantha Huggins, who was working at The Natural History Museum. Domino met at a local kids’ clothing store. There she told Samantha she had a home birth, and upon seeing her interest in the topic, she asked her to become a doula. After that, they started working together, and after a while, they founded Carriage House Doulas.

Cassius Riley became a big brother in 2020. His mother, Domino, gave birth to her first child with actor Penn Badgley. After weeks of media speculations, the British musician took to her Instagram on September 20, revealing her child’s birth. In the caption, Domino also revealed she gave birth to the kid 40 days ago.

Kirke and her husband Badgley announced they were expecting their first child together in February 2020. While announcing her pregnancy, Kirke shared a photo revealing her growing baby bump on Instagram. Kirke also revealed the pair had suffered two miscarriages in a row before they finally could announce the arrival happily.