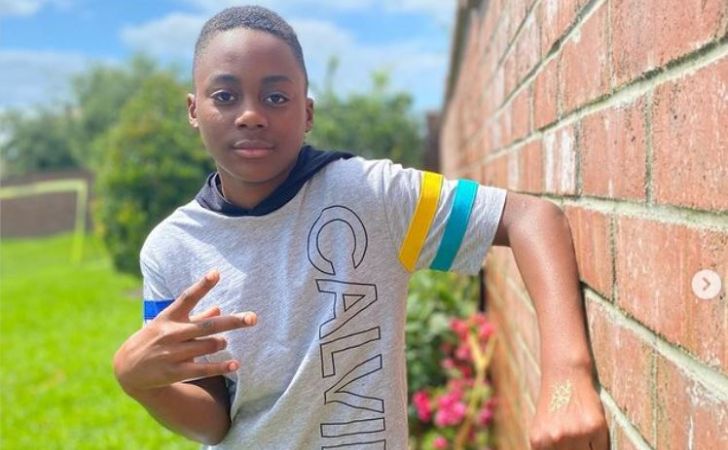 If you know American professional basketball player Dwight Howard, you probably know his eldest son Braylon Howard. As the son of a famous father, the 14 years old has already achieved immense fame in the media. In fact, the star kid seems to love the limelight. He has even already achieved decent followers on his socials.

Like his father, Braylon is also into sports and is already on the middle school soccer team. What’s more? How is his relationship with his parents? Here we have brought to you several interesting facts about his career, age, and much more.

Continue reading to find in detail.

To all those who are unaware, Braylon Howard is the oldest son of NBA player Dwight Howard and his ex-girlfriend, Royce Reed. He was born on November 18, 2007, in the United States. As of 2022, he is 14 years of age.

Since Braylon’s parents are no more together, he lives with his father as per the court’s decision. Talking about his education, he currently studies at Montverde Academy and is in 6th grade.

He Has Four Siblings From His Father’s Different Relationships

Braylon Howard is not the only kid in the family. He rather has four younger siblings, Trey, David, Jade, and Layla. And the most interesting thing is that all her siblings are born from his father Dwight’s relationship with different women.

Unfortunately, Dwight has not talked much about the mother of his kids in the media. But one of his kids, a son named David was born from his relationship with his ex-girlfriend named Melissa Rios. As for a fact, Rios is no more as she died of an epileptic seizure on March 27, 2020. She reportedly died at the home in Calabasas, California, when David was six years old.

As the oldest brother, Braylon shares a great relationship with all his brothers and sisters. The siblings even go out together on vacations.

Soon after Braylon’s parents’ split, her mother Royce filed a paternity suit against Dwight. In a suit filed at Orange County Circuit Court, Royce asked the court to establish fatherhood officially and determine child support and other paternal responsibilities. As per the suit filed at the time, she also asked for medical care from the court.

Besides, Royce also became subject to legal action after she violated the rules set in a previous court document. As per the reports, Reed and Dwight who were the subject of the reality TV show Basketball Wives were prohibited from talking about one another in public.

However, Reed was sued by Howard after she reportedly defamed him on Twitter over 11 times. As per TMZ, every violation of their co-parent agreement was subject to a $500 fine. Thus, considering the fact, that the leaked Twitter stories reached 1,000,000 people, Howard claimed that she owed damage of $550 million total.

Well, a representative of Reed denied the wrongdoing and stated that the leaked info came from a legal document.

Braylon Is Very Close To His Mom

Like any son, Braylon shares a very good relationship with his mom. In fact, his bonding with his mom is even visible in social media posts. He has shared a number of posts of Royce on his Instagram.

On May 9, 2021, he even wished his mom on Mother’s Day, posting a few adorable photos on his Instagram. He came up with a beautiful caption, where he wrote,

“Happy Mother’s Day @roycereed aka mommy. I wanna thank you for everything I have. It it wasn’t for you I wouldn’t be here. The love u give me is the same love I give u. I understand just how much u love me. Thank you mom.”

He also posted another photo of his mom, where she can be seen posing for his camera. Well, their mother-son bonding continues forever.

Like his father, Braylon is also a sportsman. He is a huge sports enthusiast, but unlike his father who is a basketball player, he is into soccer. In fact, he is on his school’s soccer team. Back on September 12, 2019, he even shared a clip of him playing soccer with his team on his Instagram.

In March of 2022, something shocking happened that really rocked the world of football. Braylon’s mother Royce Reed had to surrender to the authorities in Orange County, Florida. So what really happened?

Well, Dwight’s son Braylon reportedly had a history of inappropriate sexual conduct with minors. Yes, you read it right, this small kid, who is barely even a teenager was reportedly involved in a couple of unseemly sexual conduct.

“Royce Reed’s young son has an alleged history of inappropriate sexual conduct with minors, that came to a head last year when he allegedly made the minor son of Royce’s boyfriend perform a sexual act while the two boys were at Royce’s home.”

How Much Is Braylon Howard’s Net Worth?

As the son of a popular NBA player, Braylon lives a lavish life and enjoys all the luxuries in life. But since he is still in his school, he does not make money of his own and is rather focused on his studies.

His father on the other hand is pretty huge with a net worth of over $140 million as of 2022. Likewise, he earns an annual salary of around $23 million, as per Celebrity Net Worth.

Looks like Braylon is a big fan of social media. He was once active on Instagram by the username @braylon_howard_offical.” He had already amassed over 4.5k followers and used to post his personal and professional details. Likewise, he was also on TikTok, where he posted dancing and lip-sync videos. As of now, he has either deleted or deactivated his account.