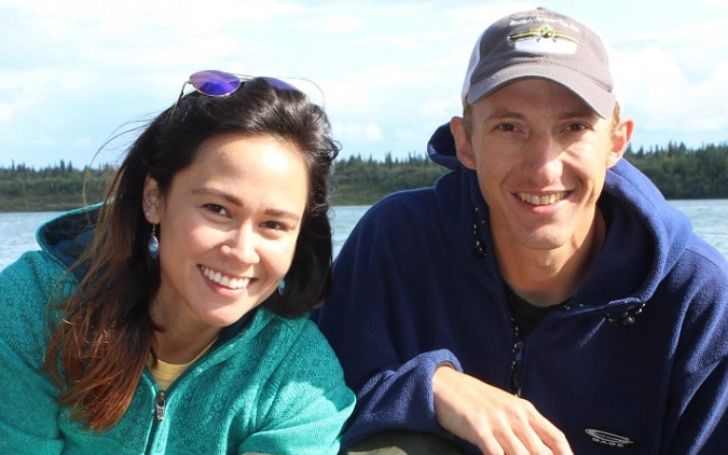 Martha Mae Salitan is an American TV personality famous as the former cast member of Life Below Zero, a documentary series that airs on the National Geographic channel. Her husband Erik was also a pivotal part of the show.

After their departure, the couple has been involved in their own business. The two are the proud owner of Talarik Creek Lodge which provides fishers the ability to fish numerous famous fisheries.

Let’s also take a close look at Martha’s long-term marriage with Erik- Do they have children? Here are several unknown facts about her including her parents’ lodge business and more!

Martha was born in Iliamna, Lake and Peninsula Borough, Alaska. She spent the majority of her childhood in Iliamna with her parents and other family members. Her father and mother have a fishing lodge, in which Mae also worked for a long time.

Being a lifelong Alaskan, hunting, fishing, and many other adventurous comes to her as a birthright.

Martha and her husband Erik started appearing in the show at the beginning of the series in 2013. It is produced by BBC Worldwide.

The show documents the lifestyles of individuals living in the Alaskan harsh weather and wilderness on the National Geographic Channel.

The popular on-screen project won its first Prime Emmy Award for Outstanding Cinematography for a Reality Program in 2016. It has since been the regular Emmy recipient reality show.

Why Did Martha Mae Salitan Leave The Show?

After years of association with Life Below Zero, Martha and her hubby Erik departed from the show in late 2016. However, they never revealed the reason behind their departure from the show.

Similarly, a few other members of the show quit it including a skilled survivalist Glenn Villanueva in 2019. Sources reported Glenn was fired from the showrunners without any explanation.

The series now stars Chip Hailstone and his wife Agnes Hailstone as well.

What Is Martha & Her Husband Doing After Life Below Zero? Their Talarik Creek Lodge

The couple invests their entire energy into their own businesses. The two own a Talarik Creek Lodge, located on the shores of scenic Lake Iliamna. Erik bought the lodge back in 2014.

It provides full enjoyment to viewers with its amazing surrounding. Over the course of their one-week trip, travelers can fish in the Newhalen River and the Tazimina River as well as can explore beautiful views of rainbows.

Furthermore, it boosts private rooms with private baths. Martha mainly manages the operations at the lodge, cooking tasty meals and fulfilling all needs of her guests.

Apart from that, her spouse Erik has been running his own guide and outfitting company called Bushwhack Alaska Guiding and Outfitting since 1998. It offers numerous hunting and fishing tours with full facilities in remote Alaska.

They have also been involved in community work. Her partner Salitan supports many conservation groups including Pope & Young Club, Safari Club International, and the Alaska Professional Hunters Association as well.

How did Martha and Erik Meet? Their Engagement

The couple met after Erik went to Alaska from New York. After some time, they began dating and also did a lot of adventurous together. They both are avid fishers and hunters.

Talking about their engagement, Erik proposed to his girlfriend in a very unique way. He attached the engagement ring to the end of the fishing rod from where Martha found out and subsequently they engaged.

Here is the video that explains how their engagement went down

The reality TV star Martha has been in a beautiful marital relationship with her husband for a long time. However, they have kept most of their personal details very private. It becomes more complicated to trace out further about their love story since their departure from the show as they have refrained from making any appearance.

On the other hand, the two are the proud parents of one son named Lucas. He currently studies at Wood River Elementary.

The family of three split their time between Wiseman, AK, and Iliamna.

Who Is Her Husband Erik Salitan?

Born and raised in the rural lower 48 states in the upstate of New York, Salitan is the third generation Funeral Service Care Giver. He did his +2 from Finger Lakes Community College.

Erik later made his move to Alaska to enroll at the University of Alaska Fairbanks and earned a degree in applied science. Following his graduation, he moved to Wiseman, a village in the Arctic, Alaska.

He is an accomplished pilot and a registered guide.