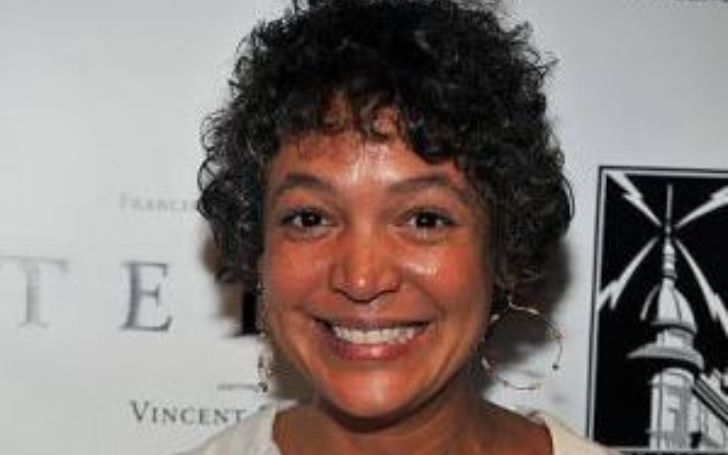 Erinn Cosby, 56, is a professional photographer and artist popular as the second child of the fallen comedian Bill Cosby and his wife of over five decades, Camille Cosby. She is also quite popular for her feud with her own father.

Now working as a successful artist, Erinn once suffered from drug abuse while she was just a sophomore in college. After years of struggle, she got help and is now leading a clean lifestyle.

The father-daughter duo also reconciled after the tragic death of Ennis Cosby. So, where is Erinn Cosby now? What does she do for a living? Also, is she married? Stay with us to know more about the second Cosby heir Erinn Cosby.

Erinn Cosby- Where Was She Born In? Details Of Her Age, Wiki, Bio

The professional photographer Erinn Chalene Cosby was born on 23rd July 1966 in Los Angeles, California, the USA. She recently turned 56 years in 2022. Cosby is an American by nationality and has Afro-American ethnicity.

She is the second child of comedian-actor Bill Cosby and his long-term wife Camille Cosby. Erinn grew up alongside her older sister Erika Cosby and her three younger siblings- Ennis (1969-1997), Ensa (1973-2018), and Evin Cosby.

Her younger brother Ennis was tragically murdered during an attempted murder in Los Angeles in 1997. Similarly, her sister Ensa Cosby passed away due to renal failure on 28th February 2018.

Talking about her education, Erinn finished high school at a boarding school in Pennsylvania. She attended a series of private and public schools during that time.

Cosby dropped out of Spelman College during her sophomore year and later earned her Bachelor’s degree in photography and imaging at New York University.

She then enrolled at Fordham University and earned her master’s degree. Moreover, she did her Ph.D. in psychology at Temple University.

Erinn’s Siblings Are All Successful Artists

Though the Cosby siblings didn’t follow their father into the showbiz world, they all are equally successful in their own fields. Just like Erinn, her older sister Erika is an artist- a painter to be more precise. She mostly does abstract.

She graduated from the University of California at Berkeley and served as an adjunct art professor for Steinhardt School for NYU in 2007. Moreover, her works are featured in renowned galleries like Arlington Arts Center, Artspace, SALTWORKS Contemporary Art, and more.

In a similar way, Evin went to the Fashion Institute of Technology in New York and finished her bachelor’s degree. She currently works in a fashion line and even owns a boutique store called PB & Caviar located in the Tribeca neighborhood of NYC.

Although the stand-up comedian and actor Bill Cosby seemed to have a fun and loving relationship with his family, it was not the same with one of his daughters Erinn.

The father-daughter had a troubled relationship for many years after Erinn fell into drug abuse. Their relationship was so off-track that Cosby even gave an interview to the Los Angeles Times talking about his ‘troubled’ daughter.

During the interview, he told,

“She appears to be the only one who is really very selfish. … I think she’s a child who has refused to take responsibility for supporting herself. … She’s never held down a job, never kept an apartment for more than six months. Erinn never finishes anything. She uses her boyfriend. Her problem is behavioral. She’s very stubborn. She’s not a person you can trust.”

According to a source, Cosby even ratted out his own daughter to the media. He allegedly handed information about Erinn’s battle with drug and alcohol abuse to a media outlet.

Even then, Erinn calmly handled the labels saying, “I don’t know about those quotes, all of this stuff was so long ago. It was ridiculous.”

Bill and Erinn rekindled their relationship after Ennis’ death in 1997. As of now, they have a good relationship. Erinn even spoke in her father’s favor after he was accused of assaulting women in the 60s.

Over the past few decades, around 60 women publicly accused Cosby of being a sexual predator. After years and years of accusations, lawsuits, and trials, Bill got sentenced to prison for 10 years in 2018. He was guilty of three counts of aggravated indecent assaults.

However, he only served a little over two years of his 3-to-10-year sentence at the state prison near Philadelphia. He came out of prison in 2021 after Pennsylvania’s Supreme Court overturned his sexual assault conviction on a technicality.

After his release, he tweeted saying “I have never changed my stance nor my story. I have always maintained my innocence” thanking his supporters.

While some celebrated his release some slammed it. Ex-playboy Bunny Victoria Valentino even said “my stomach is lurching” after hearing the news. Even she had opened up about Cosby violating her in 1970 after drugging her when she was just 24.

Erinn accused the former professional wrestler Mike Tyson of trying to rape her at his own house after inviting her himself. The then 24-year-old Cosby came forward with the bold accusation looking for justice for what she had to go through.

She even went to the Donahue TV program to discuss the incident. She said that Tyson invited her and her two friends to his house in 1989. Upon reaching there, Mike allegedly took her upstairs to give her a house tour, took her to his bedroom, and tried to violate her. Cosby said,

He locked the door, and he ran after me, The next thing I knew, I was on the ground, on my stomach with my hands behind my back. He had one hand over my mouth, and there was a lot of struggling.”

Tyson let her go only after a maid came to the door hearing her scream for help. She further revealed that Mike was offering her money to not tell anybody about the incident whilst she was fleeing his house.

After the incident, she sought sanctuary from her father, however, to her surprise Bill insisted Mike seek counseling through his attorneys. No criminal charges or case was filed against him.

The artist later revealed that the only reason she went public with her story was that her ex-boyfriend wanted to sell it.

The boxing sensation was later sentenced to six years in prison for the alleged rape of then 18-year-old Miss Black winner Desire Washington.

Erinn Is A Full-time Photographer

Following her graduation, she began working as a full-time artist/photographer. Likewise, she even acted as the model for Denise Huxtable on The Cosby Show.

Cosby is currently based in Philadelphia and owns an art studio. Her works were exhibited in galleries across Miami and New York City.

During her show at the Art Sanctuary Gallery in Philadelphia, 70 mounted photographs captured by Cosby were on display for the public. Erinn tells the stories of everyday people from places like Cuba, Senegal, India, and more through her art.

Is The Photographer Erinn Cosby Married To Someone?

Moving on to her personal life, Cosby lives a low-key lifestyle and rarely talks about her private life. Likewise, she avoids media attention and is not seen much in the public hence, not much about her current relationship status is known.

According to sources, the media personality was previously married in 1990 when she was just 24. Although the identity of her husband was never revealed, they reportedly got divorced in just four months. After that, Erinn moved to Miami to start a new life.

What Is Her Current Net Worth?

Erinn is reportedly worth around $1 million as per sources. Her primary income source is her career as a photographer.

On the other hand, her father Bill has a whopping fortune of $400 million. He began his career in 1961 and was actively working in the entertainment field until 2018.

Who is Andrew Wilson’s son Joseph Obiamiwe Wilson mother? What is he doing now?