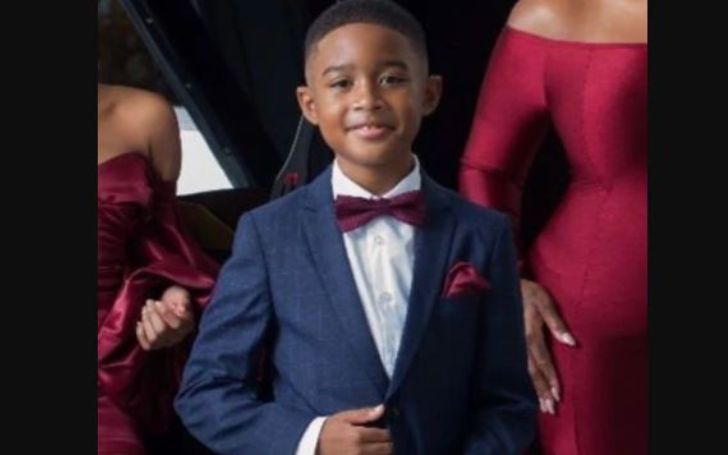 Dallas Xavier Barrino is the son of Fantasia Barrino, the winner of American Idol Season 3, which aired in 2004. After winning the American Idol, Dallas’ mother, Fantasia Barrino, singer, and songwriter, has been visible in the entertainment business. She is now a mother of her three children including Dallas.

Barrino’s raw talent as a songstress, combined with her hard-luck story as a teenage mother, won her many fans, starting with her winning the American Idol. She has also released numerous studio albums and there’s even a TV movie about her real-life story. However, when Barrino was about to give birth to Dallas she was juggling tough circumstances. For once, she was facing allegations of wrecking a marriage and clinical depression.

Although she experienced her fair share of setbacks, Barrino held on and overcame her challenges and is now living her best life with her family. Now a mother of three children, the singer has embraced motherhood and usually shares pictures and videos of her kids on social media. Know one of the kids, Dallas Xavier Barrino in the headings below.

The second son of Fantasia, Dallas Xavier Barrino was born in December 2011. Fantasia Barrino reportedly welcomed baby Dallas, her second child, and her first son at a North Carolina hospital at Presbyterian Hospital in Charlotte.

The currently 10 years old Dallas was born at 21 inches and 7 lbs 9 ounces. His songstress mother at the time of his birth described him as a wonderful addition to her family.

The singer had expressed her joy about the then-new baby Xavier when she revealed in August the same year that she was pregnant, telling the audience at a charity concert in Florida.

“So, this child that I carry – God has given me this child. And I don’t have to hide it from none of y’all,”

The 37-year-old though never mentioned who the father was and to this day remains mum about it. But at the time, the singer and her then-partner, Antwaun Cook had been having an affair since the summer of 2010. To this day, Fantasia, however, has not confirmed if Cook is the real father of Dallas.

Dallas Xavier is the middle child of Fantasia’s three children. He is second to his elder half-sister, Zion whom his mother had from her previous relationship with Brandel J. Shouse. The Free Yourself singer got pregnant with Zion when she was 17.

During the time of Xavier’s birth, Zion was 10. Dallas is also the elder half-brother of Keziah London Taylor, a girl; born through Fantasia’s marriage with her current husband, Kendall Taylor.

Dallas presumably also has half-siblings from his alleged father, Cook’s side. His stepfather Taylor too has another child — a son named Treyshaun — from a previous relationship. Xavier was two-year-old when Taylor started dating his mother, Fantasia.

As mentioned, Dallas’ mother is now married to Kendall Taylor. He apparently is a businessman. The couple tied the knot in July 2015 after dating for only three weeks. Together they are parents to Keziah born in May 2021.

Fantasia in Nov 2020 revealed she and Taylor had difficulties while conceiving their first child. However, when the pair found out they were really expecting, Fantasia, on her Instagram wrote,

“Keep trying and you will conceive,”

Earlier Fantasia told her social media fans during an Instagram Live segment that she was trying to hide her pregnancy for as long as she could, but she eventually couldn’t.

As mentioned, Barrino has never affirmed if Antwaun Cook is the biological father of Dallas, but they were very much having an affair during the time of his birth. Dallas’ mother, Fantasia, and his alleged father, Cook allegedly started dating in the summer of 2009.

Worth noting is that Antwaun, a salesman and real estate agent, also has a great relationship with his son, Dallas. Barrino’s former partner never misses the opportunity to wish Dallas his birthday wishes.

Dallas’ parents apparently didn’t start their relationship in a positive light. The year Fantasia and Cook met the former had been receiving several Grammy nominations and a role on Broadway in The Color Purple.

Cook, on the other hand, was living in Charlotte, North Carolina. But he then was the husband of another woman, Paula with two kids.

According to ABC News in 2010, Paula upon knowing about Antwaun and Fantasia’s affair filed for custody of her kids and subsequently also sued Fantasia under an “alienation of affection” law.

The provision essentially allows a spouse to sue a third party for “diminishing” a marriage. Cook’s wife accused Barrino of breaking up their marriage while she and her husband were still together.

It was legal in North Carolina state. Paula claimed Fantasia and Antwaun were going to “bars, restaurants, nightclubs and the like.” Paula’s lawsuit additionally referenced a sex tape that Barrino allegedly made with Cook.

With the media, Xavier’s mother, however, initially denied knowing Antwaun Cook was married. Barrino later in Nov 2010 nonetheless testified in the child custody case of Cook and Paula. There she admitted to knowing from the first day of her relationship with Cook that he was married and still living with his wife.

This was some months after the Lose To Win singer announced she was pregnant with Dallas, delivering the news to a concert audience while she was onstage.

That year Fantasia made another headline after it was reported that she admitted to terminating a pregnancy that was the result of her and Cook’s affair.

Before testifying in the case of Paula vs Cook, in August 2010, Dallas’ mother and the ex-American Idol winner attempted suicide. This she reportedly did after Antwaun’s then-wife, Paula called her “home wrecker.”

It was several days after Cook’s wife, Paula filed a child-custody petition that included allegations of the affair. There apparently was footage of the suicide attempt that later also made it to Fantasia’s reality TV show, “Fantasia for Real.”

After the incident, Dallas’ mother was rushed to Charlotte, North Carolina, hospital for a “sleep aid” overdose. Paula later ultimately dropped both the suit & the divorce filing.

The lawsuit could have cost Fantasia millions, and her lawyer reported the lawsuit had “frayed” the singer’s mental and emotional state. Fantasia upon recovering confessed to VH1 Behind the Music (via People) special that she had overdosed on aspirin and sleeping aid.

However, as Fantasia revived, there were reports that suggested she kept on seeing Cook. Then in 2011, the I Believe singer welcomed Dallas Xavier, and, as CNN noted at the time, she didn’t reveal who the father was.

Me and Antwaun, as of now, we are not together. I think it’s the best thing for us all. We have to learn how to become friends again.

She added how she was wanting to make everyone else happy, to love (Antwaun), to make sure Zion was Ok, to make sure everything (was okay). Fast forward to the present, Fantasia is now married to Kendall Taylor.

In addition, as evident from Barrino’s Instagram post, she even seems to have a peaceful relationship with her ex, Cook, and his wife, Paula who all agree to focus on what’s best for their kids.

After winning American Idol 3, Dallas’ mother consistently made music in the ensuing years and went on to receive multiple accolades including certifications such as gold, platinum, and Grammy nods, as well as appearing in high profile roles on Broadway.

Having said that, although her current net worth is more a matter of guesses, she at one point did have at least close to a million-dollar wealth. Thanks to the coveted $1million recording contract on winning the American Idol.

Sources nonetheless claim that Dallas’ mother is very much a millionaire even in the present.