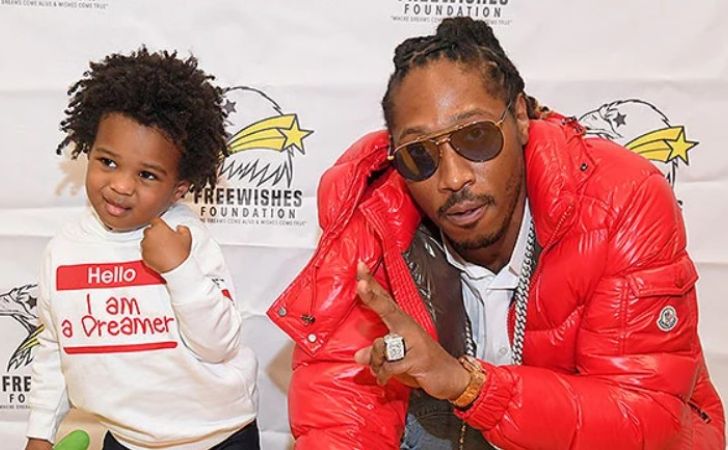 Prince Wilburn is the star kid born to Nayvadius DeMun Wilburn aka Future. His father is a well-known rapper, singer-songwriter, and producer. He is regarded as one of the most influential rappers of his time. On the other hand, his mother, Brittni Mealy is an entrepreneur and social media influencer.

There are a lot of unknown facts regarding the son of the rapper. In fact, he has eight other half-siblings from his father’s multiple relationships. Today we will look at the facts and mysteries surrounding the star kid including his age, birthday, siblings, his parent’s relationship, and more.

Similarly, his father has been in the headlines for multiple controversies. What was the reason for all the controversy? So, to know the answer to the aforementioned questions, fasten your seatbelts as we embark on a journey to learn more about Prince Wilburn, Brittni Mealy’s son.

Who is Prince Wilburn? An Insight into Future’s Son

As we already said, he is the celebrity son of a famous rapper. Prince was born on December 5, 2012, to Nayvadius DeMun Wilburn and Brittni Mealy. He is 9 years old as of 2022 and his zodiac sign is Sagittarius.

Prince Wilburn Has Eight Half Siblings

Prince is not the only child of the famous rapper Future. He has a total of eight brothers and sisters from his father’s different relationships. Jakobi Wilburn is the eldest son born to Future and Jessica Smith. Similarly, Londyn Wilburn was born with his father’s relationship with India J.

Prince Father is a Rapper

Future was born Nayvadius DeMun Wilburn on November 20, 1983, in Atlanta Georgia the United States. He is an American rapper, singer/songwriter, and record producer. The megastar is best known for his mumble styles vocals. He is also considered to be one of the most influential rappers of his time.

Prince’s dad started his career working as one of the members of the musical group called The Dungeon Family. It is where he got the name ‘Future.’ The talented star started to release multiple mix tapes from 2010 to 2011 including Dirty Sprite, 1ooo, and True Story. Prince’s father signed a major deal with Epic Records and continued releasing mix tapes; the rest is history. He has been one of the top music artists with his unique musical style.

On the other hand, Prince’s mother is an entrepreneur and a social media influencer. She has her clothing line called Unicorn Universe, which promotes feminism. Along with that, she has also written a book “Rich Bi$h Energy: A Self Love Guide To Millions” which provides women with techniques for self-love and care.

She is an influencer having a total of 484K followers on Instagram.

When Did Prince Wilburn’s Parents Meet? Details on Their Relationship

His parents met in late 2009 in an Atlanta club. At the time Prince’s mother was working as an exotic dancer. They started talking and became friends. However, at the time Brittni was in a relationship so they didn’t take it any further.

Later down the line, faith had other plans. Future and Mealy met again when she was working at Magic City. They exchanged numbers and started seeing one another. In an interview talking about their romance, the businesswoman said,

“He really pursued me, we traveled together all the time, he really took care of me, we took care of each other. We moved in together and I became pregnant with our son. We had a good relationship. This was before his career took off. My son was born in December of 2012.”

However, their love life didn’t last long when Prince’s dad’s career took off; the relationship between his parents started to crumble. Likewise, when asked about what happened in their relationship Prince’s mother said,

“I even remember the day he got signed, he called so excited and said “Bae my dream just came true!” But, of course, his dream became my nightmare. With his success, came the lies, the cheating, the deceit. He stopped coming home every night. The more successful he got, the more comfortable he was with mistreating me and disrespecting our home.”

Brittni even found out about his other relationship and when she confronted him, the rapper assured her of getting rid of the situation when the time was right. However, that never happened. Instead, the former lovebirds even had Twitter rants with each other.

Future lashed out at Brittni’s mother and cursed her calling her names. So, out of frustration and agony, Brittni lashed out at him. Despite, that the pair remained together. However, back in 2018 when Brittni found out about his affair, she decided to leave him for good.

Prince Wilburn Has a Nice Bond with Both of His Parents

Since his parent’s separation in 2018, he has been living with his mother. However, he is often seen spending time with his father. He has been spotted multiple times with his dad and other half-siblings. The multi-talented rapper also shares photos of his son on Instagram and so does his mother.

Whatever the case, the star kid loves his parents and shares an excellent bond with them. We hope that Prince will continue showing the same compassion and love towards his family members and grow up to become a decent person.

In the year 2016, the rapper was sued by his former fiance and girlfriend Ciara and Jessica Smith. Ciara sued him for slander, libel, and defamation. However, in October 2016, her case was overruled by the judge as according to him she didn’t relate to the $15 million lawsuit. According to Ciara-Future hate, tweets cost her half-million in endorsement deals. However, a report from TMZ shows that the tweets alone weren’t enough to file the lawsuit.

Similarly, Jessica on the other hand sued him for not paying the child support, stating that he neglects their son and that he has been suffering emotional and behavioral issues needing specialized tutoring. According to her, the rapper was lying about his monthly income and the $2800 she was receiving was not enough.

Apart from that Prince’s mother Brittni also exposed Future for his bad parenting. She shared a story of the text message her ex-boyfriend had with their son which said,

“Tell your mom, Buy u some clothes. Your mother is a ho*!”

In that response, Brittni said, “He texts this to a child, You a real coward. He is 8 years old stupid.”

Prince Wilburn’s Lifestyle; His Father is a Multi-Millionaire

Prince is enjoying a lavish and blissful life and is currently living with his mother in their beautiful home in Atlanta.

Similarly, talking about his parent’s net worth, his father, Future is a multi-millionaire. He is estimated to have a total net worth of $40 million. He has accumulated his wealth from his career as a rapper, singer-songwriter, and record producer.

On the other hand, his mother Brittni Mealy is estimated to have a total net worth of $1.5 million. She has accumulated her wealth from her career as an entrepreneur and former dancer.

Cleopatra Ricci Hampton, Christina Ricci Daughter; Who is her father?