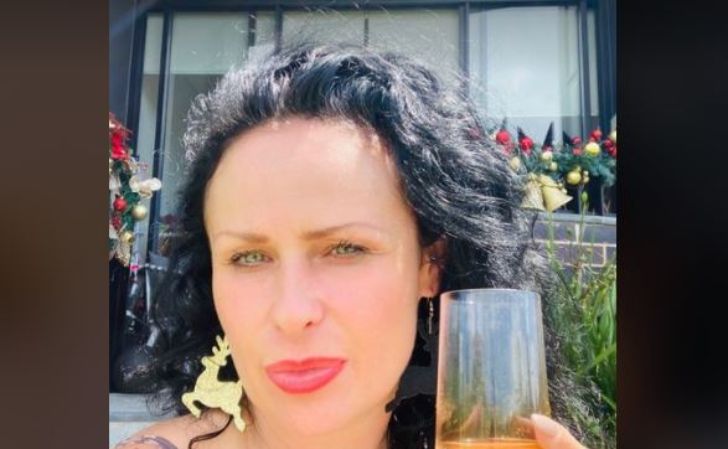 Giselle Peacock is a celebrity dancer and the former United States Champion and World Finalist in Ballroom/Latin DanceSport. She is also adept in various dance styles including Jazz, Hip Hop, Swing, Lindy Hop, and Salsa.

Over the years Peacock has performed all over the world with the Broadway production of Burn the Floor, along with performances on Broadway, the Westend in London and Television, on Dancing with the Stars and So you think you can Dance in both the U.S and Australia.

In the present, Giselle spends her days spreading her knowledge of dance to all ages in many styles in schools across Sydney, Australia. Giselle, the Champion Ballroom Dancer is also known for one other aspect; her bygone relationship with her former partner, Artem Chigvintsev, another TV dancer. The two were husband and wife for less than a year but a dancing partner for several years and on multiple competitions.

Know all about this former couple’s relationship journey in the write-up below. Along the way, get a prolonged look at the life of Giselle Peacock; how she started as a dancer, her upbringing, current doings, and more.

Giselle Peacock Started Dancing Young Though With A Different Motive

The celebrity dancer, Giselle was born in February 1981 and apparently grew up in the San Francisco Bay area.

In a 2017 interview with Sydney Dance Company, Peacock said she thought of starting ballroom dance lessons after watching her parents take a class. The performing artist said it was actually the accessories that drove her to the art.

I started Latin dancing when I was about 10 and started competing worldwide when I was 14 years old. My parents started ballroom lessons and I saw another girl my age there who was wearing high heel shoes. So I knew that if I started lessons my parents would buy me the high heels. It didn’t really have anything to do with dancing at all.

said Peacock of why she decided to pursue a career in dance.

As she grew up, Giselle became pro in Latin-style dancing and by age 14, she was competing around the world. Peacock attributes Samba as her favorite because “it is the fastest and most energetic of the Latin dances.”

Giselle, currently in her early 40s, represented the U.S. twice at the World Championships and was a finalist in “Ballroom/Latin DanceSport.”

Her achievements as a pro-dancer include the title of the 2000 International British Championships, England. She has also secured a second-place finish at the Blackpool Dance Festival in 2001 alongside partner Genya Mazo, and others.

Peacock married her former husband, Artem Chigvintsev in 2004 and remained his wife for a few months only.

The Latin professional dancer and Chigvintsev met at the Blackpool Dance Festival in 2003. They were then both in their early 20s. The former explained to the Daily Mail in 2010 that soon after, Chigvintsev flew to the United States to attend a wedding with her. After that, future Dancing With The Stars performer never booked a flight home to Russia.

We fell hard for each other. Artem didn’t have anywhere to stay, so I took him to my dad’s house in California where we shared a room, and we were inseparable. We started dancing together as partners within weeks of his arrival.

The California native said her dad had also agreed to sponsor Artem to get a work visa so they could continue training together. She revealed how her future ex-husband literally had no money. So for the first eight months, she supported him by buying all his food, clothes, dance classes, entertainment.

Giselle And Her Ex-Husband Artem Were Dance Partners

After starting to live with Peacock, Chigvintsev’s relationship with the American dancer gradually developed. Amidst that, the couple began competing together on the ballroom dancing circuit in the United States. This went on for nearly two years. Dance Sport Info reports – when together, the pair won five Amateur Latin competitions between 2003 and 2005.

Giselle and Chigvintsev tied the knot in November 2004 at a courthouse. The Champion ballroom dancer told the Daily Mail she would have preferred a destination wedding. She, however, didn’t do so because she was afraid if Chigvintsev left the US, it would have been difficult for him to get back.

Why They Split Up?

Peacock and Chigvintsev’s union began to experience rifts in the mid-2000s. The ex-couple after the wedding had decided to audition for So You Think You Can Dance (Dancing With The Stars) in 2005.

During their audition, the judges noted their chemistry was palpable. Giselle explained to the camera since “Latin dancing is very passionate, very romantic,” she and Chigvintsev’s intimate relationship enhanced their dancing.

But despite the positive reviews from the judges, only Chigvintsev made it to the show. Peacock says it was after that their marriage started to crumble. She stated she felt Artem, who is now 39-year-old, changed dramatically over the course of their relationship.

She described him transitioning from a sweet, skinny Russian boy to the one who became more and more obsessed with fame, success, and money.

Giselle reported to the Daily Mail the fame went to her Russian ex-husband’s head and that he simply vanished from her life gradually within a span of months.

I went home and Artem never came back with me. He literally disappeared out of my life. He stopped taking my calls, never even went back to my dad’s house to pick up his clothes. In the end, all I could do was leave him a voicemail saying: ‘As you won’t talk to me, I thought I’d let you know that I want a divorce,’

said Peacock of the points where Chigvintsev started to show fewer interests in her and their eventual divorce.

The former So You Think You Can Dance star said after the split, she wondered whether Chigvintsev had married her for personal gains. She wondered if he did so in order to have a better chance of securing a green card. As such, Chigvintsev became a U.S. citizen in 2014.

Did Giselle Peacock Remarry Post Her Separation From Chigvintsev?

After separating from Artem, Peacock married a professional musician Giorgio Rojas in 2010. While unclear, it is presumed the new couple met through work.

Rojas bio on the GPower Dance Fitness website defines him as a “master percussionist” and the one who has toured internationally with Burn the Floor.

The show, in 2014, shared a picture of the couple on Facebook as they relaxed on a boat. Peacock’s now-husband, Rojas was born and grew up in Peru and started playing instruments at the age of three.

He likewise earned his bachelor’s degree in music at the Australian National University. The Hispanic man additionally and reportedly also taught jujitsu at his American wife’s studio. Sources report it was Rojas who suggested Peacock for a permanent move to Australia.

Giselle and her Peruvian husband have two daughters together. They had their first girl, Xenia Lisa in December 2015 while their second daughter was born in August 2017.

Is She Still With Her New Husband?

What’s intriguing about Peacock’s current love life is that it has been a while since she and the father of her daughters, Giorgio Rojas appeared together be it in any social gatherings or on their respective socials.

For some, it is quite an eyebrow-raiser. Most people have wondered if the American-Peruvian couple is still husband and wife or if they have parted their ways already.

There however lies no such notions or headlines in the interwebs that would have otherwise stated where the things are standing for Giselle and Giorgio. As for Giselle’s ex-husband, Chigvintsev is currently with his partner, Nikki Bella, a WWE superstar. Together they are parents to a son, Matteo Artemovich Chigvintsev.

Right after leaving the show, Burn the Floor and settling in Australia, Peacock opened up her own dance studio in Naremburn, a northern suburb of Sydney, called GPower Dance Fitness.

At her studio, Peacock reportedly offers several classes including cardio dance, barre, yoga, pilates, and body sculpting at her studio. She also took the classes online amid the coronavirus pandemic.

In her company bio, the mother of two explains her dance lessons include “Jazz, Hip Hop, Swing, Lindy Hop, and Salsa.”

What Is Giselle’s Net Worth?

A categorical assessment of Giselle’s net worth is yet to be looked on by the media or analysts. Ironically, though, Artem, the one whom she used to support has a recorded net worth of over $6million.

If nothing for the ex-Burn The Floor star, it is pretty certain that she once used to be more well off than her Russian ex-husband; as aforesaid she used to financially back him up during his struggling phase.

As for now, the replication to Peacock’s financial standings is cut out abstruseness. Yet to say out on a limb, it easily could be in the domain of hundreds of thousands to even millions as well.