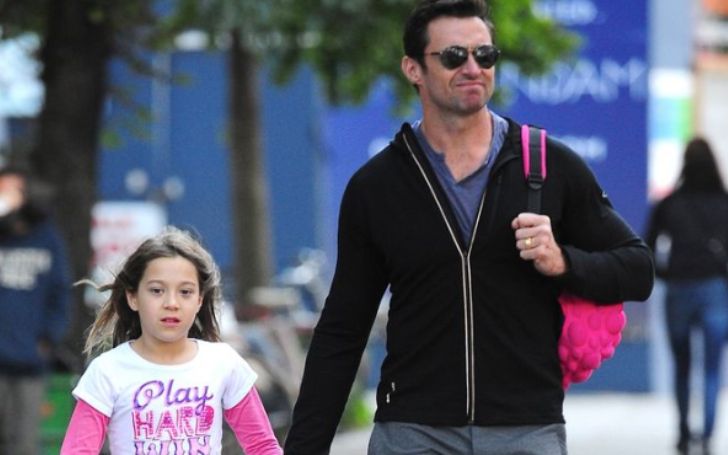 Ava Eliot Jackman is the younger daughter of the X-Men film series actor, Hugh Jackman and his lovely wife, Deborra-Lee Furness. Ava Eliot’s parents have a huge age gap of 13 years and a marriage of 26 years.

But did you know that the couple does not have children of their own? That’s right. Hugh and Deborra have two adoptive children – Oscar Maximilian is their older son and Ava Eliot is their daughter. Despite the barrier of adoption, 17-year-old Ava has a charming relationship with both of her parents. However, did you know that Hugh Jackman is banned from attending his daughter’s ballet recitals? Well, he is, and we will know why very soon.

Therefore, by the end of this article, we will have looked deep into the life of Hugh Jackman’s daughter Ava Eliot Jackman. Who is she besides just being the daughter of two great Australian actors? Let’s find out together!

The beautiful Ava was born on July 10, 2005. Right after her birth, she was adopted by actor, Hugh Jackman and his actress wife, Deborra-Lee Furness. However, she isn’t the only child of her loving parents.

Ava Eliot has an older brother who is also adopted. Oscar Maximilian Jackman is the 22-year-old son of Hugh and Deborra. Just like his sister, Oscar’s parents took him in just a few days after his birth on 15th May 2000.

As of 2022, Ava Eliot is 17 years old. In 2019, she enrolled in high school but little is known about where she actually goes to school. Furthermore, few sources confirm it to be in New York where Ava Eliot lives with her parents.

Hugh Jackman and his film-producing wife, Deborra-Lee Furness are both Australian and Caucasian. As well as that, Hugh has an English lineage with parts of Scottish and Greek heritage. However, the couple wanted children of mixed race when they decided on adoption.

So, Ava Eliot has a descent of half Mexican and half German. Not only she, but her brother, Oscar comes from the line of multiple mixed races including African-American, Caucasian, Hawaiian, and Cherokee.

Was there a great reason behind Hugh and Deborra adopting kids of mixed races? There was. In an interview with People, the famous Wolverine actor opened up about the reason for his mixed-racial children. As it turns out, Hugh and Deborra thought there was a need to adopt children of mixed ethnicities since they are the ones who’re ignored the most. Therefore, the couple specifically requested bi-racial babies at the time of adoption.

Her parents, Hugh Jackman and Deborra-Lee Furness are both actors and met on the set of the Australian TV series, Corelli in 1995. 53-year-old Hugh immediately developed a crush on his future wife on their first encounter. Despite a 13-year-long age gap between the love birds, Ava’s parents totally hit it off since the very first meeting.

After dating for a few weeks, Hugh Jackman knew that Deborra was the one for him. In an interview, he said,

“I knew two weeks into meeting Deb that we were going to be together for the rest of our lives.”

Talk about meant to be!

However, this wasn’t the case for Deborra-Lee Furness in the beginning. She was quite skeptical about dating a man 13 years younger than her. But the charming personality of the future father of her children won her over. The lovely couple then engaged each other just 4 months after dating.

Following the engagement, on April 11, 1996, Hugh and Deborra got married. The ceremony took place at St. John’s in Toorak, Victoria. The power couple shared special rings with a phrase engraved in Sanskrit on their wedding. It reads, “om paramar mainamar”, which translates to, “we dedicate our union to a greater source”.

The Adoption of Ava Eliot and Her Older Brother, Oscar Maximilian

Ava Eliot Jackman’s parents have a very lovely relationship. The bond that Hugh and Deborra share can even be idealized on some level. However, they faced a lot of hardships while trying to have a family of their own.

Deborra was already in her 40s when the couple decided to tie the knot and start a family together. The risks of conceiving at a greater age led her to even face two miscarriages. On top of all this, fertility treatments and IVF weren’t easy on the couple. Therefore, pushing each hardship away, Hugh and his spouse decided to adopt.

Following this, in 2000, the couple adopted their son, and in 2005, their daughter. Hugh and Deborra love their kids as their own despite adopting them. Moreover, Ava and Oscar must also have a great relationship with their celebrity parents.

Ava Eliot has Banned Her Father from Attending Her Dance Recitals

Don’t get us wrong, Ava has a very good relationship with her father, Hugh Jackman. However, she has banned him from attending her dance recitals and there is an obvious reason behind it.

When she was just a 14-year-old, Ava’s Emmy Award-winning father attended one of her recitals. At the program, he became the center of attraction. Because of this, she does not like Hugh attending any of her school programs and has banned him from doing so too.

Except this, Ava and Hugh have a normal and lovely father-daughter relationship. We can even say that he is the actual superhero dad to his daughter.

Once, on a vacation to Australia, Ava Eliot got caught in high waves with her brother at Bondi Beach. Looking at his children in trouble, Hugh Jackman rushed to pull Oscar and Ava out of the water and helped others reach the shore safely as well. He sure is the protective father every child needs.

Ava Jackman Loves Dancing; Will She Follow in the Footsteps of her Star Parents?

By now, you can guess that Ava Eliot Jackman is really into dancing. She has even joined Ballet classes and performs in frequent dance recitals as well. The only question here is, will she follow her parents into stardom?

We do not know that quite yet. Both of Ava Eliot’s parents are successful Australian Actors. Her mother, Deborra-Lee Furness is an actress and producer. She is famously known for her parts in Legend of the Guardians: The Owls of Ga’Hoole and Shame.

On the other hand, Ava’s father, Hugh Jackman is greatly known for his role as the Wolverine in the X-Men film series. For his part in this series, he has even been awarded Guinness World Record. Besides this, he is a versatile actor with different roles in movies, TV series, and theatre.

It will take years before Ava Eliot makes a debut in showbiz like her parents; she might not make an entry at all too. Regardless, we wish her all the very best for what is to come in the future.

Ava Eliot is not in a relationship as of 2022. She is just a 17-year-old surviving through high school and focusing to get into college. This could be the reason for her being inactive on any social media platforms. Ava also has a quiet lifestyle, away from the hassle of the Internet.

In the future, however, she might come out of this bubble and talk freely about her love life, among other things. Till then, we just have to be patient.

Ava Eliot Has an Expensive Way of Living

The fame and fortune are more than enough for Ava Eliot to have a satisfying and fulfilling life. She must really have a sumptuous and luxurious lifestyle.