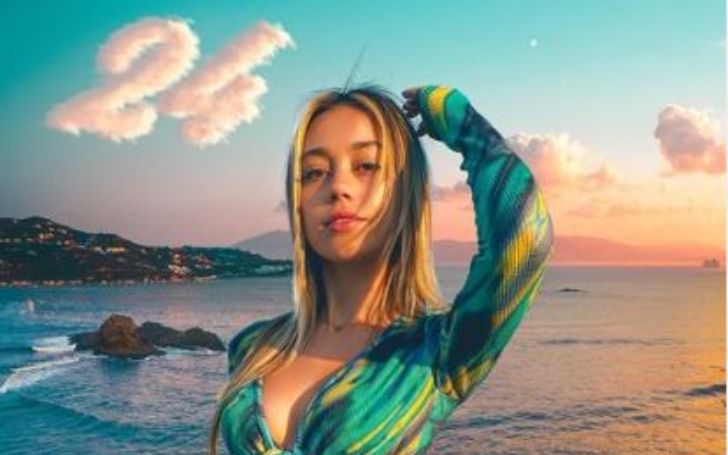 Moving on to her dating life, Ivanita is currently dating her YouTuber and Instagram star boyfriend Lucas Dobre. The couple began their relationship for the second time in 2018 and are living a blissful life ever since then.

Today, let’s talk about Ivanita Lomeli’s success on social media platforms. Also, is the YouTuber really pregnant? Stay with us to find out more about her.

Ivanita Lomeli Has Mexican Ancestry: Her Parents and Age

Ivonne ‘Ivanita’ Lomeli was born on 25th October 1997 in Virginia to Mexican immigrants parents. Her mom and dad are from Totolan, Jalisco. Ivan will turn 25 years old in 2022.

Lomeli is an American by nationality and has Mexican ethnic descent. We can see her speaking in Mexican with her mother in her YouTube videos. Also, she has an older brother and a younger sister named Sam.

Talking about her education, Ivan, after high school, went to Hagerstown Community College graduating with an associate’s degree in the Spring of 2018. She even made it to the dean’s list.

What Is Ivanita’s Real Name?

As Lomeli goes by her stage name or her nickname Ivanita/Ivan more often, many do not know that her actual name is Ivonne. Her name was derived from the Germanic language and means ‘archer’.

She even confirmed this news via Twitter where she wrote,

“My real name is actually Ivonne. Ivanita is just my nickname”

While attending college, Lomeli decided to start a career in social media. Back then, she appeared on her boyfriend’s youtube video and social every now and then.

Ivanita started posting photos on Instagram in 2017. Surprisingly, her IG profile grew a lot in a short time. She also started her YouTube channel on 21st June 2018.

As of July 2022, the social media icon has over 5.43 million subscribers on YouTube, 52.2k followers on Twitter, and over 646k followers on Facebook. Similarly, Lomeli has over 8.3 million followers on TikTok with over 99 million total likes.

Most of her YouTube and TikTok content is about pranking her boyfriend Lucas, his brothers Cyrus, Marcus, Darius, her best friend Maddy, and her own siblings or family. She has over 637.9 million total views on her 234 videos so far.

Ivanita became one of the most popular social media influencers of all time in a short span of time. Her content garners 500-600k views per video on average.

When Did Ivanita Lomeli Began Dating Her Boyfriend Lucas Dobre?

Looking at Lomeli’s tweet, Lomeli and her beau Lucas first started dating in 2016 and were together until they broke up in April 2018.

However, after a few months apart, the lovers found their way back to each other and decided to give it a shot for the second time in November 2018. Lucas even uploaded a video of him asking her out on his YouTube channel.

Although the lovebirds upload videos related to break-up every now and then, they are going strong and are still together in 2022.

Back on 2nd October 2019, a YouTube entitled ‘I MARRIED my Girlfriend’ was uploaded on Lucas and Marcus’ channel where we can watch them getting married in Dobre’s backyard.

In the video, we can see that all of Lucas’ family and friends gathered around the altar to attend the wedding. However, at the end of the video, Lucas, Ivanita, and Lucas’ parents yell ‘It’s a prank’ to Marcus confirming that the video was just a prank.

As for now, the love birds have not confirmed their wedding date. Similarly, looking at their growing careers, the couple seems to be more focused on their career and taking things real slow regarding engagement/marriage.

Who is Ivanita Lomeli’s Ex-Boyfriend? Is a Good Friend With Him

Just two months ago in April, Ivan and her ex-boyfriend Austin pranked Lucas together. Not to forget, Austin is now dating his new girlfriend named Ashton.

According to various sources, Ivan’s net worth is around $1.5 to $2 million as of 2022. As mentioned above, Lomeli’s career is based on social media platforms like YouTube, Instagram, and TikTok.

Lomeli Also Has Her Own Merch Line

Like every other social media influencer, Ivanita also owns her own merch line called Ivanita Lomeli.  She makes fortunes from her merch where she sells t-shirts, hoodies, sweatshirts, and phone cases.

The price of her iPhone cases ranges around $22, hoodies cost around $20, and Ivanita print t-shirt costs around $42.

The 24-year-old Instagram star recently purchased a house in Maryland but the price was not disclosed.

Though she did not reveal her house location and exterior design for obvious privacy reasons, she did give an inside house tour. She uploaded a YouTube video of her giving a full tour of her new purchase.

Lomeli previously owned an apartment around the same area and lived there before she went for the big girl purchase. She also owns a 2019 MERCEDES BENZ GLC AMG 63s COUPE worth around $35 thousand.