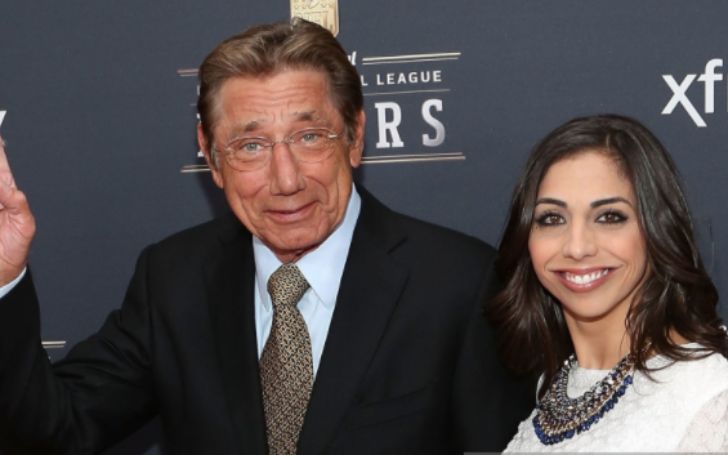 Jessica Namath is famous to the world as the daughter of veteran NFL player Joe Namath. Whenever we hear the word Namath, our mind instantly thinks about the legendary Joe. However, today we’re not here to talk about Joe, but rather his daughter, Jessica. Up until now, star kid Jessica has had a fulfilling life.

Nevertheless, she too has been a little unlucky in the love department just like her mom and dad. She was once enjoying fruitful marriage life with her husband and kid, but in 2019, Jessica filed for divorce.

Well, today in this article, let’s take a close look at her personal life. Here today, we will try to answers questions like why did she file for divorce? Who was Jessica Namath’s husband, btw? When did they marry?

Their wedding was an intimate affair. One of the attendants was TV legend, Dick Cavett. In addition, Jessica’s mom, Deborah Mays also attended the wedding. The post-wedding celebration took place in Fort Lane.

Now talking about their relationship, Jessica rarely talked about her affair. Even on her social media handle, she never shared any pictures from her wedding. Similarly, Brian, despite being married to a star kid, was able to hide himself from the media for long.

Nevertheless, we do know the lovebirds started dating several years before their wedding in 2015. Back in 2008, when Jessica lost her pet puppy, reports stated that she was living with her then-fiance, Brian. Safe to say, they dated for around a decade before taking the big step.

The luxurious residence was later named under Joe, Jessica, and Brian. As for the apartment, it has two bedrooms, one bathroom pad alongside a formal dining room, a renovated open kitchen, a living room, wide-plank bamboo floors, and a built-in bookshelf.

Apart from these mentioned features, the house also consists of an outdoor deck and a staircase that leads to a lower-level garden. Moreover, the house has one spacious workplace for those who want to build a workstation at home. It can also be converted into a third bedroom.

Jessica filed for divorce with Brian Kennedy in 2019

At first, it looked like Jessica and Brian would make an exceptional pair. On the contrary, their relationship didn’t even last a few years. Just days after welcoming their first child, the duo separated for good.

According to the divorce documents, their relationship had started deteriorating after Jess discovered her husband was a drug and alcohol addict. She found out about his addiction after discovering a bag of narcotics when she was 38 weeks pregnant with their son. She also stated in the documents that Brian also suffers from anger issues.

Meanwhile, her husband blatantly denied his wife’s claim. He said, “I deny all allegations made against me.”

Jessica had first filed for an annulment of their marriage in 2017 but the case was dismissed. However, this time, it had a legal stamp on it.

The divorce procedure didn’t go as smoothly as one would’ve expected. After Jessica filed for divorce, her husband retracted by asking for her millionaire father’s bank records.

According to DailyMail, Brian has reportedly asked for Joe’s financial documents, including credit card statements, bank accounts, and income tax returns. As per Brian’s attorney, it is only fair to take a look at the documents because it’s apparent Jessica is financially supported by her wealthy father.

As soon as Kennedy’s attorney asked for such details, Jessica’s legal team jumped in and touted the move as ‘a blatant overreach,’ ‘an attempt to intimidate and harass the wife and her family’ and ‘a backdoor attempt to get personal and/or corporate financial bank statements from Joseph William Namath.’

Apart from this, Brian also accused Jessica of alienating their son from him.

Besides, the document also revealed Jessica and Brian separated in September 2016, days after giving birth to their first kid.

Jessica is a mother of two children

From her relationship with Brian she the duo has one son named, John. They welcomed their son in mid-2016. As of now, he is four years old.

Apart from John, she is also the mother of one daughter named Jemma. Now the identity of Jemma’s dad is still up for debate but judging by the series of events, it looks like Brian might be her father. Let’s take a quick recap!

Back in 2008, several tabloids reported Jessica was living with her then-fiance, Mr. Brian Kennedy. Her daughter looks like was born somewhere around the 2010s, so she might be Brian’s child. But then again, we can’t be certain here!

Besides, an article by Jupitar Mag claims Joe Namath is a grandfather to five grandchildren, however, there are reports of only three of them. Two of them being John and Jemma and the third one being Jessica’s sister Olivia’s son.

It seems either Olivia or Jessica became parents again but there has been no news about it.

The tragic incident took place back in 2008 Jessica was living at her then-fiance Brian’s residence in Jupiter, Florida. Their dog, a Shih Tzu mix pup, had run away from their backyard.

Instantly, Jessica asked the help of local authorities to find her pup. She even announced a $2000 reward for those who can find him.

After months of searching, she decided to call off the search. Luckily, five years later, a man named Michael Cecere found her pet dog, in St. Petersburg, some 200 miles away from Florida.

Who is Jessica Namath? Her Age, Parents, and Education

Joe and Deborah got married on November 7th, 1984. They first met a year before in a voice class taken by Arthur Joseph.

Sadly, after two decades worth of relationship, they officially divorced in 2000. Deborah later married Brian Novack, a Beverly Hill-based plastic surgeon but this too ended in a divorce.

As for Jessica’s education, she studied at The Archer School for Girls.

Moving towards her profession, she is a writer and a photographer based in New York City. She runs her own website in which she showcases all the projects she has been involved in, so far.

Jessica has one younger sister

Her mom and dad welcomed Jess’s only sibling Olivia Namath on December 11th, 1990. She is the more rebellious child of Joe Namath having been entrapped in a few problems.

At the age of 16, Olivia gave birth to her first child, a boy. Moreover, she was once arrested for marijuana possession and driving under influence. Her baby father was a man named Edwin Baker, who himself was involved in several serious problems like marijuana possession, burglary, and grand theft.