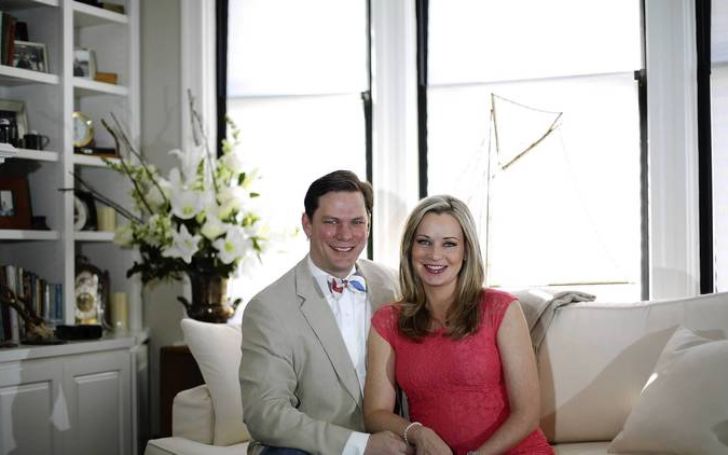 FOX News’ Sandra Smith is famous as the anchor of the show America’s Newsroom. Apart from a successful professional life, the 39-year-old blonde is in a happy marital relationship with her husband and kids.

John Connelly & Sandra Smith are married since 2010 and lead a pretty beautiful relationship together. So far, the couple has no complaints whatsoever in their life together.

However, here today we are going to explore some intricate details about Sandra Smith’s husband John, and their marriage.

Who is John Connelly?

John is the husband of well-renowned FOX news reporter Sandra Smith. He is currently self-employed since quitting his job at Azul Partners from the position of Managing Partner and Chief Marketing Officer in 2017.

Before Azul, he worked as the Director of Product Marketing at the CME Group. He was also employed at Terra Nova Trading, LLC, the same company where he met his future wife, Sandra.

When and Where did John Conolly and Sandra Smith got married?

Sandra is living a blissful married life with her husband, John Conolly. After dating for several years, they walked down the aisle on May 1st, 2010. Some sources suggest they married on May 2nd, but that is clearly not the case.

In fact, she even always shares an anniversary post with her husband on May 1st. This goes on to prove they wedded on May 1st and not 2nd.

Their nuptials took place at Holy Name Cathedral, surrounded by their friends and family. The bride and groom opted for the classic black and white attire. John wore a black tuxedo and his wife donned a white dress with floral imprints and a long veil.

Apart from his marriage, John never really had a long-term relationship with anyone. He mentioned in an interview that he was actively looking for a suitor, but never found anyone.

How did Sandra meet her hubby John Conolly? It was ‘Love at First Sight’ for John

It was around 2004 when Sandra and John first bumped into each other. At the time, the Outnumbered host was beginning her first day as a sales trader in her hometown of Chicago. She’d just arrived in the city from New York, leaving her post-college hedge fund job.

She arrived at her job and the head of the firm started introducing Sandra to her colleagues. And yes you guessed it, John was one of the traders at the firm. When John first locked eyes with Sandra, he knew from the get-go, he is going to marry her.

“I knew right then that she was the girl I was going to marry,” John told Chicago Tribune.

On the other hand, from the first impression, Sandra described John as ‘tall, bow tie-wearing, wavy-haired, and nerdy but handsome guy.’

After their first meeting, John left the company where Sandra had just started working. Soon, Sandra got her own place, an apartment in the sky overlooking DuSable Harbor.

Sandra then invited John to check out the apartment. The duo had a fun time together and drank Veuve Clicquot champagne. That is when they decided to go out.

For the first date, the couple went to the Chicago Symphony Orchestra. Subsequently, on the second date, she brought her cousins and he called his mom and step-dad and together they went to the Museum of Contemporary Art.

However, things turned challenging when Sandra got a job offer at Bloomberg Television in New York. Smith then moved to New York and John was working in Chicago. Doing long-distance is tough for every couple and similarly, Sandra and John faced the same thing.

Despite all that, John never complained. Instead, he was pushing Sandra all the way. Then after a year, FOX Business called her up for the position of a reporter. At that time, Sandra thought she’d have to stay in New York indefinitely.

Do you know Is Fox News’ Bill Hemmer Married? Who’s His Wife?

However, fate had other ideas! In early 2011, John sold off his business and moved to New York. Since then, the duo has not looked back since.

Sandra and John are proud parents of two adorable kids, one girl, and one boy. They welcomed their Cora Belle Connelly on August 23, 2013. Subsequently, they became parents for the second time in 2015, welcomed a boy.

The FOX news journalist likes to keep the privacy of her kids behind closed doors. This why she rarely shares of them and whenever she does share photos, their faces are generally hidden.

Moreover, John has mentioned in the interview with the Chicago Tribune that he’d want to have a bigger house for the kids. He said, “I’m pretty adamant about kids having their own backyard. I’m a long-term planner.”

John Connelly and Sandra have a Considerable Age Gap Between them

John and Sandra have an age difference of 12-years between them. While Sandra is 39 at the moment, her husband is 51.

But the sheer age difference between never mattered and in fact, it even inclined Sandra to pursue him even further. She said,

“Obviously, I did a little research on him when we started dating; everybody does. He hadn’t been dating a lot. I reaped the benefits of that. He gained all these other experiences — traveling, working. I don’t think I would have gotten all of John Conolly if I hadn’t met him at that time in his life.”

In addition, John also maintained he had no choice but to either wait for someone better or don’t marry at all. Thankgod, the duo found each other.

Both Husband John Connelly and Sandra are Active on Social Media

Conolly is active on Facebook and often shares his family photos. His spouse Sandra is also much active on social media. She is active both on Instagram and Twitter and has decent followers.