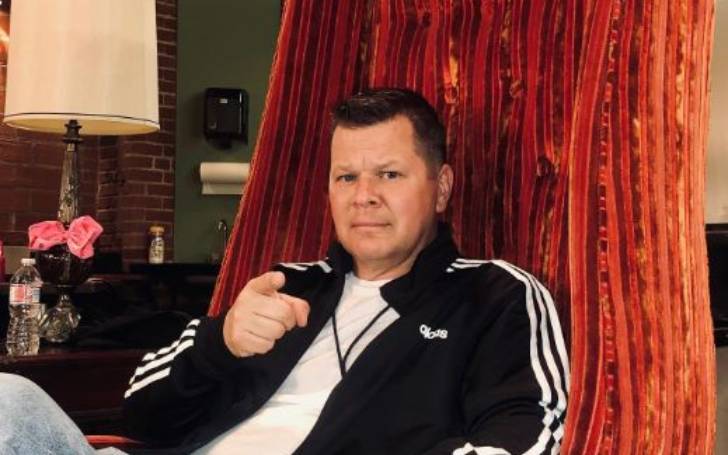 Tom Siwa, 52, is a media personality and chiropractor who became famous as the father of Youtubers Jayden Siwa and JoJo Siwa. The father of two retired from his career and now mostly works behind the scenes of JoJo’s videos.

Likewise, he is currently married to dance instructor Jessalynn Siwa. She also acts as their daughter’s manager. The two have been together for over two decades.

Although Tom did a pretty good job overlooking his children’s career and their upbringing, the two Siwa siblings did a pretty messed up prank regarding their father. Tom’s accident prank became a news headline. So, did he really get into an accident? How old is he now? Is Tom Siwa doing well? Find out here.

The media personality Tom Siwa was born on 17th July 1970 in Nebraska under the birth sign Cancer. He was born to his father Omaha Siwa and his mother Joan Siwa.

Likewise, Tom is 52 years old and has white Caucasian ethnic ancestry. He grew up alongside his two brothers names Ron Siwa and Joe Siwa. Both of his siblings are married and live with their own respective families.

The 52-year-old Tom graduated from Omaha Burke High School. After that, he enrolled at Palmer College of Chiropractic and earned his degree in 1994.

In addition, he also earned a post-graduate degree in chiropractic orthopedics to hone his talent to a further extent. Back when he was still working as a chiropractor he said that he wants to serve as many patients as he could saying,

“It has always been my intention to help as many people as I can with the best possible care. We commonly see patients with problems no one has been able to help. When we help these people recover and feel better, there is no greater gift. That makes everything I’ve worked for worthwhile.”

As of 2022, he does not perform chiropractics.

Tom Siwa Is Very Supportive Towards His Children’s Career

When now-19-year-old Jojo Siwa started growing up in the dance world, her parents, Jess and Tom retired from their respective career paths in order to support her. Shortly after that, his older child Jayden also started his social media journey.

This led the father of two to become a full-time behind-the-scenes manager for his kids while his wife Jessalynn is a business manager. The pair handles all of Jojo’s business, shows, and more.

During an interview, Jess opened up about being her daughter’s manager saying,

“Every day is just a learning experience, It’s a lot of work and a lot of commitment. If it’s what you love, you’ve gotta try.”

Back in 2017, when Jojo was just 14 years old and Jayden was just 17, they posted a now-deleted controversial prank video on Youtube. There, they talked about their father being hit by a bus on a sidewalk while on their way to buy stuff for a homeless guy.

The siblings explain the situation by saying,

“Today was a rough day. We were going to buy some stuff from the store for a homeless guy. As we were crossing the road, literally a bus came flying at us and knocked my dad to the ground.”

“My dad is in the hospital right now. The bus just smacked into him. It was a whole production, he has broken bones. When we got to the hospital it was very scary.”

While still explaining the situation, Jojo reveals that it was just a prank. She says,

“We’re just messing with you, we just wanted the views so we made up a story about a near-death experience.”

Though the young teenagers thought that it was a healthy prank, fans and viewers especially people who have lost their family in car accidents called out to them.

After that, they released another video apologizing to the public with yet another controversial statement. She said,

“I’m very sorry for yesterday’s video… I know it was a lot of click bait, and I know some of you are mad at me, but you know what? It wouldn’t be a YouTube video if there wasn’t click bait.”

How Long Has Tom Siwa & Jasselynn Siwa Been Together For?

The husband and wife have been together for over two decades as of 2022. They reportedly got married on 2nd October 1998 in an intimate wedding ceremony.

From their marriage, they share two children, Jayden Siwa b. 2000 and Jojo Siwa b. 2003. Both of his children are successful internet influencers, whereas, Jayden is also a real estate agent currently working for the company called Compass.

Although Tom and Jess have kept information regarding their early dating phase and details about how they got together under the radar, they are still so much in love even after so many years.

Moreover, the power couple can be spotted traveling, having a fun time with their family, and more on their respective social media handles.

The 52-year-old former chiropractor is equally famous as his children on the social media platform Instagram where he goes by @itstomsiwa. Tom mostly shares pictures of his family, friends, and his wife keeping his followers as updated as he can.

As of Sept 2022, he has over 84k followers. On the other hand, his super-famous daughter has over 11.6 million followers and his vlogger son has over 143k on IG.

What Is Tom Siwa’s Net Worth?

Despite having a degree as a chiropractor, Tom currently earns his fortune working for his very own daughter. He handles almost every behind-the-scenes work on Jojo’s youtube videos or during any other media appearances.

According to various online sources, his current net worth is estimated at around $2 million. On the other hand, Jojo Siwa has a jaw-dropping net worth of $20 million at just 19 years old.

Tom and his family currently reside in LA in their $3.5 million worth 6,000 square-foot mansion.