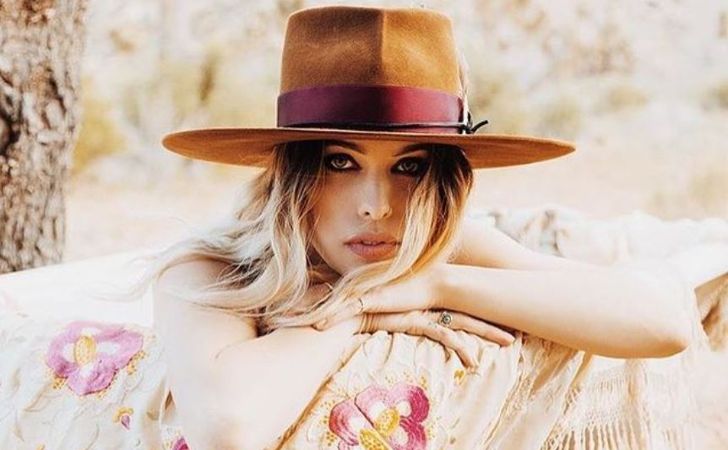 Chelsea Tyler is an American singer, & actress known for her work in Lizzie McGuire, & Aerosmith: Fly Away from Here. She is most famous as the daughter of Aerosmith lead singer Steven Tyler.

Besides, Chelsea is also a wife and a mother of a son. She is a married woman and leads a great relationship with her husband Jon Foster. Further, there are a lot more interesting details about her career, relationship, children, & much more.

Join us to learn in detail.

Who Is Chelsea Tyler?

As we said, Chelsea is an American singer, songwriter, & actress. She was born as Chelsea Anna Tallarico on March 6, 1989, in Boston, MA, as the daughter of father Steven Tyler, & mother Teresa Barrick. While her father is a singer, actor like her, her mother is a cloth designer.

Well, like any daughter, she shares a great relationship with her parents as well. Growing up as a child, she lived along with her parents. However, her parents divorced in 2006, but she is still very close to both of them.

Talking about her education, she did her schooling at a local school and also later attended Thayer Academy.

Well, Chelsea is not the only child of her parents. She rather has three siblings Taj Monroe Tallarico, Mia Tyler, & Liv Tyler. While Taj is her biological brother, Mia, and Liv are her step-sisters born from her father’s other relationships.

Well, all her siblings are hugely famous. All of her three siblings are actors and have appeared in numerous movies and TV series. And like any brother and sister, she shares a great relationship with them.

Not only this, but they often go out together to spend quality time.

Born as the daughter of a famous singer, Tyler was inclined towards singing from an early age. Eventually, as she grew up, she also picked up acting as a profession. However, she has so far made just a few appearances as an actress.

She made her acting debut in 2001 in a short video named Aerosmith: Fly Away from Here, where she played a young Steven. A year later in 2002, she appeared in an episode of Lizzie McGuire. She has since not appeared in any movies or even music videos for that matter.

As a singer, she has released numerous songs including Someone New, which was pretty successful. Further, she also performed along with her father on several occasions. Back in 2009, she sang with Steven during the opening of the Thayer Academy Center for the Performing Arts in Braintree, Massachusetts.

She is also the founder of a band named Kaneholler along with her husband Jon Foster.

Well, Steven Tyler’s daughter Chelsea is a married woman. She is married to a successful American actor Jon Foster. The couple reportedly tied the knot on June 20, 2015, in a private wedding ceremony. The wedding was held in a private estate in Carmel, California. The ceremony was attended by her siblings, parents, and other close friends.

It has now been around 6 years since they tied the knot and they seem to be going pretty well in their relationship. But how did Chelsea and Jon first meet? Well, they first met back in the summer of 2011 via a mutual friend Zoe Kravitz, who is the daughter of musician Lenny Kravitz and the actress Lisa Bonet.

At the time, Tyler was pursuing a career in modeling whereas Jon was looking for an opportunity in acting. But their mutual interest in music led to them collaborating together. Soon enough, they fell in love. Later on, one of their managers, Tyler Rutkin stated,

The duo dated for around 4 years before they finally walked down the aisle. Talking about their long-lasting relationship, Jon once stated,

Hope their relationship continues for years to come.

She Is A Mother

Aerosmith singer Steven Tyler’s daughter Chelsea is a mother to a son named Vincent Frank Foster. She welcomed the first child with her husband on February 21, 2020.

Soon after the birth of their kid, both the duo shared beautiful photos on their respective Instagram, announcing the arrival of the new member. Sharing a snapshot, the new dad Jon wrote “VINCENT FRANK FOSTER 2/21/20 🍼❤️.”

At the same time, Tyler too made another post sharing her newborn to the world. She wrote,

Just for a fact, Chelsea is the last among all three daughters of Steven to become a mom. While Liv is a mother to three kids, Lula Rose, Sailor, and Milo William Langdon, Mia is a mother to a son named Axton Joseph.

How Much Is Chelsea Tyler’s Net Worth?

As a successful singer and actress, Chelsea makes a decent amount of money as her salary. However, she has been pretty silent when it comes to her exact net worth.