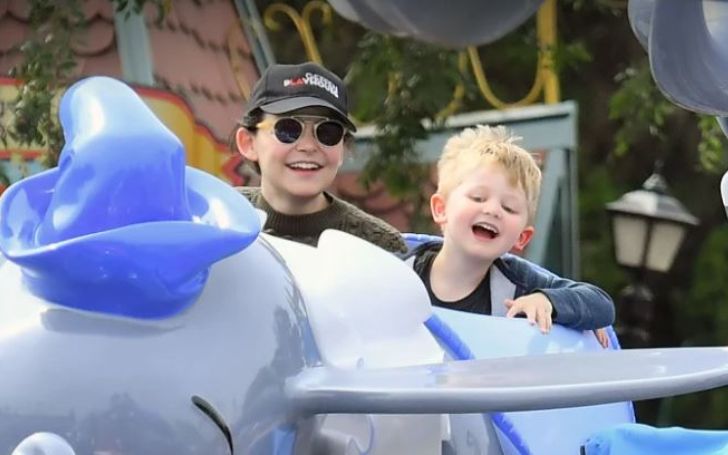 Oliver Finlay Dallas is a celebrity kid who is the son of the actor couple from the ABC fantasy adventure drama show, Once Upon A Time, Josh Dallas and Ginnifer Goodwin.

Both Oliver’s parents played on Once Upon A Time; Ginnifer portrayed Snow White while Josh acted as Prince Charming. Goodwin and Dallas had Oliver in the early 2010s; the actor-pair though hasn’t really shared much about him.

Oliver, nonetheless, is among the kids who often rise to public attention understandably because of their famous parents. Take a look back at the countdowns when Goodwin and Dallas were about to become the father of Oliver; how their life changed after his birth; how the couple is raising him, and others.

Despite the presence of a physician, Oliver’s delivery was done by his actor father, Josh Dallas. His actress mother refers to the moment as very hands-on.

In an interview with Jimmy Kimmel in Feb 2016, the Zootopia actress said while there was a doctor in the room during Oliver’s delivery, Josh nonetheless was asked if he would like to deliver his baby which the actor agreed to promptly.

Goodwin further said her actor spouse did all those without gloves. Josh and the Big Love actress delivered Oliver at Cedars-Sinai Medical Center in May 2014.

The doctor, who oversaw Ginnifer’s first baby, Dr. Paul Crane, was also the one who helped out the two Kardashians sisters, Kim and Kourtney, with their pregnancies.

Maternally, the now eight years old, Oliver is of English, Welsh, Ashkenazi Jewish, and some German descent. From his father’s side, his ethnicities include English, German, Scottish, distant Swiss German, French and Irish.

Goodwin and Josh kept the name of their first child a secret for quite some time. Part of the reason, the couple later revealed was that they were apparently struggling to choose the name for their firstborn.

Goodwin in an interview said naming a child with the last name Dallas was a little more complicated for her and her spouse.

She further revealed Josh and she also did a lot of research with respect to Oliver’s name. The couple reportedly read so many books including how to raise a child.

Josh and Ginnifer though eventually came up with the name, Oliver. Similar to the regal world they played in Once Upon A Time, Josh and Goodwin kind of ended up naming their son, Oliver in a regal manner.

While Oliver might not fit the definition, his middle name, Finlay apparently does resemble regal. It reportedly is an Irish baby name that means fair hero with fair meaning fair-haired, as per Gaelic translation.

Is Oliver Finlay Dallas On Once Upon a Time?

While Oliver, age 8, never made an appearance on his parents’ former show, Once Upon A Time, when Goodwin was pregnant with him, the show did include the actress’ real-life pregnancy into its storyline.

In fact, Ginnifer with Oliver in her womb in the ABC fantasy show represents the actress’ character Snow White getting pregnant with Prince Neal.

Just before Oliver’s birth, the show Once Upon A Time in its story included Ginnifer’s Snow White and Josh’s Prince Charming having their second child in the episode Kansas in season three. The producers managed to scoop in her pregnant storyline only in the season’s second half.

Oliver’s folks, Josh Dallas and Ginnifer Goodwin met on the set of Once Upon A Time in 2011. Even on the show, their characters were each other’s love interests.

The actors are both Southern and it was Josh who asked Ginnifer to marry him in Oct 2013.

Just one month after announcing their engagement, the couple revealed they were expecting their first child, Oliver. Josh and the Something Burrowed actress married in April 2014.

The nuptials took place in Venice, California. The ceremony was allegedly low-key. Ginnifer was eight months pregnant with Oliver during her wedding to Josh so in a way, Oliver did attend his parent’s marriage.

Josh and Ginnifer’s marriage was first for Goodwin and second for Dallas. Oliver’s father was previously the husband of Sherlock actress, Lara Pulver; the two separated in the fall of 2011.

Likewise, Ginnifer too was engaged to the Big Bear actor Joey Kern before starting a relationship with Josh Dallas. Two years after having Oliver, Josh and his actress wife had their second child, also a boy, Hugo Wilson Dallas in June 2016.

Oliver Finlay Was A Reader

Goodwin once revealed her eldest son with Josh, Oliver was an avid reader. Interestingly, back then, Oliver was just nine months old.

He is like the most imaginative nine-month-old on the planet. He reads books like you wouldn’t believe

said the Twilight Zone alum. Oliver’s habit of reading, Goodwin said, really made hers and her husband’s then life easy.

Goodwin and Josh apparently barred their eldest son, Oliver from watching most of the animated movies even when he was a child. The actress and the actor reportedly also didn’t allow Oliver to watch Zootopia despite Goodwin herself being one of the film’s lead stars.

Explaining the reason to the Hollywood Reporter in March 2016, Oliver’s mother said she didn’t want her son to see the animated film because she felt her son was confusing the characters with real-life people.

The Heartstrings actress said how at one time when she allowed her son to watch Winnie The Pooh, he ended up thinking the characters in the film were real.

Goodwin explained by preventing her son from watching the animated films she was avoiding the potential event where she had to shatter her son’s illusions.

The Pivoting actress said she and her husband just wanted their son to become imaginative. The other reason was that Goodwin and Josh didn’t want to halt his physical activeness of Oliver as he reportedly was an extreme sports enthusiast from the beginning. What’s more, Ginnifer and Josh also banned Oliver from any form of screen be it iPads, TV, cell phone, and other digital entertainment until his school age.