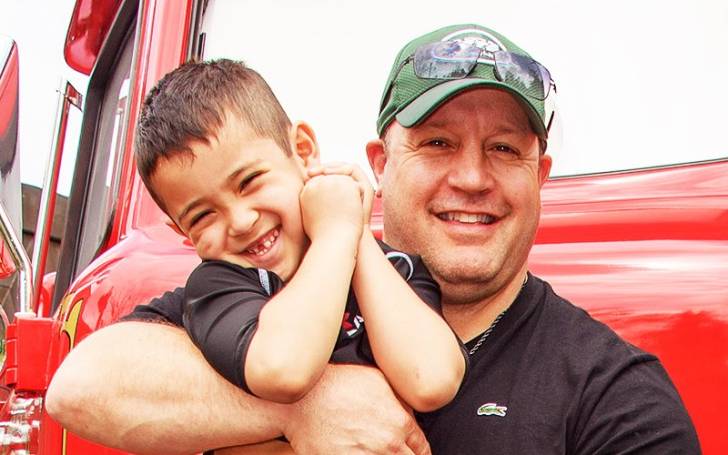 Kannon Valentine James is famous as comedian Kevin James’ son. Kevin has been entertaining us all for the past few decades. He is most famous for his role as Doug Heffernan in the CBS sitcom, The King of Queens.

Aside from having a delightful professional life, Kevin is relishing a great life behind the scenes. He is a father of four kids, three girls, and one boy, whom he shares with his wife Steffiana de la Cruz.

Today we will be discussing Kevin’s only son, Kannon Valentine James. Without further ado, let’s get right into it!

Kannon Valentine James is the third child between Kevin and his wife Steffiana: Meaning behind his unique name

During the 2011 Easter, when everyone was celebrating the resurrection day of Jesus Christ, the James family bring forth their own miracle. Steffiana gave birth to Kannon on April 25th, 2011 in a Boston hospital, a rep for the pair confirmed to the PEOPLE magazine. Kannon’s arrival was quite lucky for his father as the movie, Zookeeper, released in July 2011, became a major hit.

We’re sure many of you are curious to know the inspiration behind the unique name. Well, the moniker Kannon is reportedly inspired by Kuan-yin, a Chinese Buddhist deity of Mercy. It is of Japanese origin. The name is so unique that Social Security Administration, according to the 2011 data, doesn’t have it in the list of top 1000 popular boy names of the past 20-years.

Similarly, Kannon’s middle name Valentine is a nod to his late grandfather Joseph Valentine Knipfing. Moreover, Valentine was the name of the last three Roman emperors.

Initially, the actor announced his wife was expecting their third child in January 2011. Kevin revealed that he and his wife are adding to the brood during his appearance on the Today show hosted by the now-disgraced journalist, Matt Lauer.

It wouldn’t be an understatement to say Kannon doesn’t get bored inside the house, all thanks to his siblings. He has three sisters, two older than him and one younger.

Kannon’s mom and dad welcomed his oldest sister, Sienna-Marie James in 2005. Two years later in 2007 the second one, Shea Joelle James came into this world. The youngest of them all, Sistine Sabelle James was born in 2015.

All four of them together keep the spark at the James household alive, especially Kannon and Shea. They are the only ones who haven’t touched teenage yet so they have a few more years to disturb the peace.

He is into music

We’d expect, a star kid like Kannon is bound to be well-versed in something creative. Well, Kannon here is all into playing the piano. His father shared a couple of videos of him playing the piano and by the looks of it, he plays it pretty well.

In March 2020, when New York City was getting absolutely ravaged due to the Coronavirues, Kannon performed a piece to cheer up those who’ve been struggling.

Apart from the above, Kevin has shared another video of Kannon playing the piano. However, this video not only showed his prowess but also his funny side. See for yourself!

We hope that in the future Kannon goes on to become one of the best musicians out there.

Kannon and his siblings are into behind the scene work

When you are a world-famous comedian, singer, actor, or whatever, you’d be hoping your child also carries the same interest. Likewise, Kevin once divulged that he is somehow influencing his kids’ interest in comedy. Back in 2016, when he was gearing up for his series, Kevin Can Wait, the actor revealed a few tidbits from his personal life in an interview with PEOPLE magazine.

He talked about his experience working on a project where he plays the role of a retired cop who, after spending more time with his family, finds out shocking truths. He said, “I never did a show with kids before. So I’m excited about that. I have four kids of my own, and I’ve been breeding them for nothing but comedy.”

Furthermore, the Hitch star also mentioned that his oldest child Sienna-Marie has taken up Kickboxing. As for his other three kids, they are into animation and drawing. He stated, “They don’t want to be in front of the camera, which I’m happy about, but they want to get behind it.”

Kevin and Steffiana De La Cruz started dating in the early 2000s. According to reports, they first met on a blind date, set up by one of their mutual friends. They were instantly smitten and started going out officially.

The couple announced their engagement in the fall of 2003. A few months after the engagement, they exchanged vows on June 19th, 2004 in an intimate ceremony. The nuptials took place at the St. Edward Catholic Church in Southern California.

As for the guests, well, there were a few big names from the showbiz including his close friend, Ray Romano among many others. The reception was held at Montage Resort in Laguna Beach.