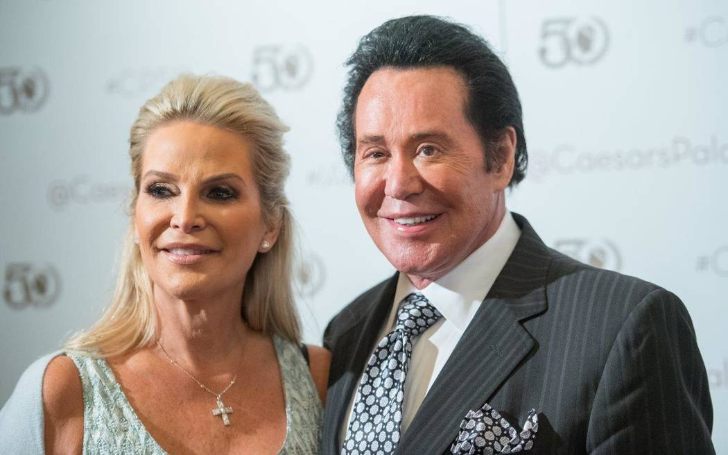 Kathleen McCrone is a Civil and Criminal lawyer from Ohio. More than her profession, she grabbed the attention of the media by being the wife of an American singer and Actor Wayne Newton (aka Carson Wayne Newton). Her husband is known for the songs like Daddy, Don’t You Walk So Fast, Red Roses for a Blue Lady, and most prominently a Danke Schoen in 1963.

Similarly, Kathleen’s husband Wayne is also regarded as one of the best entertainers in Las Vegas, known as The Midnight Idol, Mr. Las Vegas, and Mr. Entertainment. Well, the now-married couple met each other in Las Vegas when Wayne was performing on stage. The couple, Wayne in his 80s and McCrone at 58, are enjoying 28 years of their marital relationship in 2022. Being married for such a long time, does Kathleen share any children with her husband?

To know in detail about Wayne Newton’s wife, Kathleen McCrone’s age, marriage, career, net worth, & much more, read this article till the end.

When Was Kathleen McCrone Born? Her Wiki And Age

Kathleen was born to her father William J. McCrone and her mother Marilyn Furman on March 21, 1964, in Cleveland, Ohio. She is 58 years of age as of 2022. She grew up in her hometown along with her two sisters.

Talking about her parent’s profession, her father William was a federal judge in the Rocky River Municipal Court and Cuyahoga Court of Common Pleas while her mom seem to be a housewife. Unfortunately, McCrone’s father is no more in the world as he passed away from cancer.

Besides, Kathleen belongs to a white ethnical background and is of American nationality.

As we said earlier, Kathleen has two sisters Mary McCrone and Tricia Clift McCrone. Her eldest sister Mary McCrone was a television producer who worked for Channel 8. She was an Emmy Award winner and also known as an ex-wife of an American singer, songwriter, and TV personality Michael Stanley. But, sadly, she suddenly died at the age of 46 in the year 2009.

Kathleen McCrone Is An Attorney By Profession: More On Her Career

Moving on to her profession, she chose to be a legal practitioner just like her father. She graduated in law and became a Civil and Criminal lawyer from North Olmsted, Ohio. She first practiced her degree in her homeland and later shifted to Las Vegas, Nevada.

Similarly, as a lawyer, she vigorously defends her husband with his legal matters. In the past, she even defended a lawsuit filed against her spouse where he was accused of sexual harassment and animal cruelty. At the time as a professional, she managed all the legal affairs that her husband was undergoing.

Apart from this, her popularity due to her famous partner also allowed her to appear in a couple of television shows. She appeared in the 2003 American TV series The Bachelorette as herself. Further, McCrone was also seen in the 2008 TV series Celebrity Family Feud.

Kathleen McCrone Is Married To Wayne Newton: Their Wedding

The beautiful Kathleen got married to one of the best-known entertainers of Las Vegas, Wayne in a grand wedding ceremony. The duo shared vows on April 9, 1994, which took place at Wayne’s 52-acre ranch estate, the Casa de Shenandoah.

In the meantime, about 200 guests showed up for their grand wedding. Horse-drawn carts were arranged for guests to reach the wedding destination. Coming up to 2022, the lovely couple had been in a marital relationship for 28 years and are still happily living together. The husband-wife duo keeps attending several events which can be seen on McCrone’s spouse’s official social handles.

How Did They Meet?

The now-couple met for the first time on the show in Las Vegas. At the time, Newton was performing on the stage and Kathleen was amongst the audience. Both of them had a family connection and as per the source, Kathleen’s mother had met Newton several times before Kathleen.

However, they never had come across each other prior to that event. It was Newton who noticed his future wife in the mass and invited her backstage. After that, they started seeing each other and eventually got married.

Kathleen McCrone’s Husband Was Married Before

Her spouse Newton was married to his first wife named Elaine Okamura on June 1, 1968. As per Closer Weekly, the couple had tied the knot in the Flamingo Hotel in Las Vegas. The pair were in a marital relationship for 17 years and separated in the year 1985 citing irreconcilable differences.

The couple together welcomed a daughter in July 1976 whom they named Erin Newton.

Kathleen McCrone Shares A Daughter With Her Partner Wayne

After 8 years of marital relationship, Kathleen finally gave birth to a baby girl named Lauren Ashley Newton on April 29, 2002. As of 2022, Kathleen’s daughter is 20 years of age and has already started her career as an actress. In 2020, she portrayed the role of Janice in a comedy movie named Stealing Chaplin directed by Paul Tanter.

Besides all of these, Wayne and Kathleen’s daughter Lauren’s personal information is out of reach. But she keeps appearing alongside her parents and attends several events. She shares a beautiful bond with both her father and mother. Prior to Lauren, Wayne had already become the father of her half-sibling Erin Newton who is 26 years older than her.

Kathleen’s Spouse, Wayne Newton is on Instagram under the username @waynenewtonmrlv with 5,889 followers. Further, he is also on Facebook with 6.8k followers.

What Is Kathleen McCrone’s Net Worth?

As per different websites, the celebrity spouse, Kathleen has a net worth of $150 million. She accumulated a major amount from her career as a criminal lawyer. Similarly, her famous husband Wayne Newton has an estimated net worth of  $50 million dollars as per Celebrity Net Worth.

Who Is Riki Lindhome Boyfriend? Her Dating Life, Husband, Past Affair

Meet Sydney Brooke Simpson, O.J.’ Daughter: What Is She Doing in 2023?