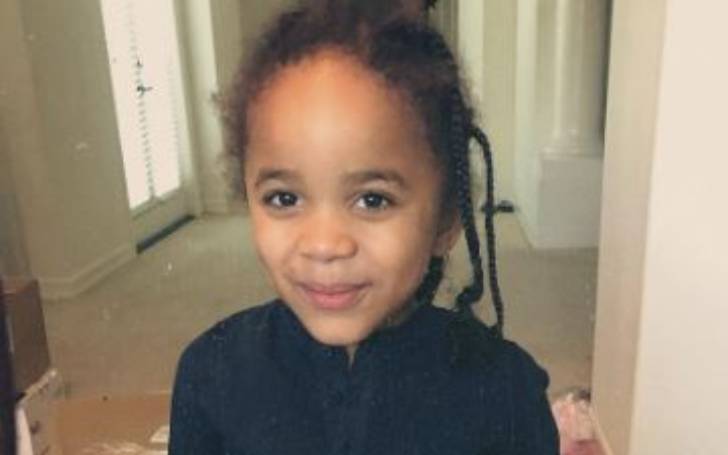 Khaza Kamil Gates is a star kid born to Kevin Gates and his long-term wife Dreka Haynes. Gates is the younger child of Louisiana-based rapper Kevin who is popular for the album, The Luca Brasi Story.

His famous father named his third studio album after his son, Khaza. The album was released in June 2022 via Atlantic Records. Besides, the 8-year-old often appears on his mother’s IG handle.

When you’re born to celebrity parents, your life automatically become a matter of interest for the people. The same goes for the young star Khaza Kamil. And keeping that in mind, we present you with some unknown facts about Khaza. We will also find out if his parent is still together or not.

The star kid Khaza Kamil Gates was born on 10th May 2014 in the USA with the birth sign Taurus. He recently turned 8 years old in 2022.

He is the younger child of Kevin Gates and his wife Dreka Gates. Kamil has an older sister named Islah Koren Gates. She is just a year older than him. Both of the kids are currently homeschooled. As per Dreka, the kids will be homeschooled until they are ready to explore the world.

Khaza Kamil was Birthed at Home

On 10th May 2019, Dreka posted a picture of Khaza with a very long caption where she reveals that she birthed her children at home. As per her, she gave birth to Kamil via the aqua doula birthing tub without using any type of vaccination and doctor’s help.

She also said that her older child, Islah was birthed the same way in Atlanta, Georgia. Moreover, Dreka called the process euphoric and the best thing she did for her kids and herself.

Khaza Is An Arabic Name-What is the Meaning Behind It?

Kevin and Dreka went with the name Khaza which means ‘treasure’ in English and ‘gift from god’ in Islam. Likewise, his middle name Kamil means ‘perfect’ or ‘the perfect one’.

Similarly, his sister also has an Arabic name, Islah meaning ‘reform’ or ‘to improve’. As both of their parents are Muslims, they went with Arabic names.

Does Khaza Kamil Gates Have Siblings Other Than His Older Sister?

As much as the internet knows, Kevin shares two beautiful children with his wife Dreka. However, during an interview with Complex, he revealed that he has other children besides Khaza and Islah.

During an interview with Complex in 2013, he said that he has children outside his relationship with Dreka. He also revealed that he spends time with them as much as he can.

Finally, Kevin said that he’s not going to reveal their identity and that people will never know they’re his children.

Khaza Kamil & Islah Are Not Vaccinated

In this generation of advanced tech and medical achievements, Kevin and Dreka decided not to get their children vaccinated. When asked why, she said that they want their children to grow up naturally without any chemicals in their bodies.

Back in 2016, Kevin opened up about this decision with Rolling Stone. He said,

“I don’t believe in conspiracy theories or anything like that, I’m just a cold-blooded investigator.”

Likewise, Dreka revealed that she had an incident in the hospital a few years ago which made her question the whole system.

Even now, the couple strongly believes that the best way to raise their children is without chemicals and any other artificial things on their bodies.

Khaza’s Father Kevin Titled His Third Album After Him

As we said earlier, Kamil’s father is a famous singer and rapper with a number of mixtapes reaching the top 40 on the Billboard 200 chart.

Kevin began his musical career in 2007 by singing for the local label, Dead Game Records. He then partnered with then-future rappers Boosie Badazz and Webbie and released a mixtape, Pick of Da Litter.

As of 2022, he has released three studio albums, three extended plays, seventeen mixtapes, and thirty-four singles.

The 36-year-old rapper named his debut album Islah after his first child. It was released on 29th January 2016 with four official singles- Kno One, Really Really, 2 Phones, and Time for that.

Moreover, the album reached no.2 on the US Billboard 200 and was even certified double platinum by the Recording Industry Association of America.

His second album, I’m Him was released on 27 September 2019 with Winner’s Association and Atlantic Records.

As Kevin dedicated his debut album name to his daughter, he dedicated his third album title to his son Khaza. The album was released on 17th June 2022 and peaked at no.8 on the US Billboard 200.

The album features only one artist, rapper Juicy J on its first single, Thinking with My D***. Moreover, back in 2015, Kevin honored his son with the single, Khaza. The song has over 23 million total views.

The star kid’s parents first met while they were attending high school. They quickly became high school sweethearts and are together since the early 2000s.

The couple started getting media and public attention after Dreka was noticed during one of her cameos in Kevin’s music videos. And soon after that, they confirmed their relationship with the public.

They welcomed their children, Islah and Khaza before tying the knot on 17th October 2015. The lovers have been together since then and are living a very happy and blissful lifestyle.

Did you know Kevin & Dreka are In An Open Relationship?

As mentioned above, the couple are together for about two decades and has been together through almost everything. With their strong bond and understanding, they made an agreement to become a non-monogamous couple.

Hence, Kevina and Dreka have been with multiple casual sexual partners other than each other while still married. During an interview with Noisey, Kevin said that their agreement is more like an explorative feeling.

Are Khaza Kamil Gates’ Parents Together?

Recently in March 2022, questions regarding their spilt began arising after Kevin posted a suspicious post on the internet. In his post, he wrote,

“At times, we miss our X’s but it’s in the past for a reason – do you not recall the smell, the arguments, the energy being drained, not reaching your goals, the money you could have made, the money you f**ked up, the time you should’ve invested in yourself – f**k em. #CarryOn.”

Likewise, one of his fans wrote “Your real fans are inspired by you and her as a unit and example of Black Love.”

While the rumors were still lingering, Kevin dropped another bomb when he released his single, Super General. When you listen to the lyrics closely, Kevin is accusing Dreka of cheating. The lyrics read,

“Went home to sleep, deep down, there’s tension when you knowin’ that somethin’ missin’ / Suck it up, put all my energy back in Islah and lil’ Killa / Took the blame in interviews and made it look like I was trippin’ / Made the Dreka song lie to the world while tryna protect her image.”

He further added, “Tell me you love me, I say it back / Back in my mind, I’m indifferent / Brought this infiltrator to the farm / Hurt my heart, what am I missin. Personal trainer invaded my personal space / Deep down inside it killed me.”

The ‘personal trainer’ line added more fuel to the speculations. As for now, neither Kevin nor Dreka has addressed the rumors.

Moreover, Gates even mentioned big names like Beyonce and adult star Rubi Rose in his freestyle. While Rubi replied with a tweet, Beyonce and Jay-Z have not said a word.

Khaza’s Father Kevin was Spotted Cozying Up With Another Women

Amidst their divorce speculations, the rapper was spotted cuddling and cozying up with Love and Hip Hop Miami star Jojo Zarur.

They were spotted in NYC while going out for dinner hand-in-hand. The rapper even went Instagram live for a few minutes featuring Jojo. However, there are no recent updates about their alleged budding romance.

Well, it is self-explanatory that being a star kid, Khaza really enjoys a lavish life. His father’s net worth is around $1 million.