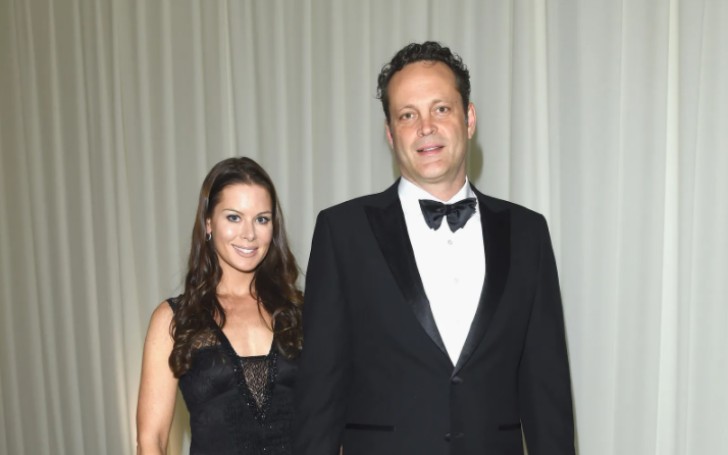 Kyla Weber is the popular wife of actor Vince Vaughn. But as a professional Canadian realtor and is leading a successful career apart from celebrity status.

Ever since marrying the Wedding Crashing star, fans have been constantly trying to know more about Kyla. Specifically, questions regarding her early life, nationality, and professional life have been asked the most.

Today in this article, we will try to answer as many questions as possible regarding Kyla.

Born in 1979, Kyla was raised primarily in Okotoks, a town in Alberta, Canada. As of now, she is 41-years-old. By birth, she is a Canadian national. Talking about her education, she studied at a local high school before attending college.

As for her parents, there is no single evidence in regards to that. Moreover, information on her siblings is not out in the media.

Prior to marrying Vince, Kyla lived a relatively normal life. She wasn’t a celebrity because of which there is no info on her personal life other than her marriage to the comedian.

What did Kyla Weber do before marrying her husband Vince Vaughn?

Before she even started dating her husband, she was a well-established real estate agent based in Calgary. She had a holding company, Goldngirl Investment & Consulting Ltd.

In the year 2006, she became associated with  Coco Homes Inc and started selling homes in Okotoks, Alberta. Her contract with the company was on a commission basis with Weber receiving cuts after she sold a house. Nevertheless, her contract with Coco Homes stopped abruptly in June of 2008 after the company, without any prior notice, terminated her contract. Kyla took the company to the court and she was awarded $21, 250 in damages.

Aside from Coco Homes, she also worked for Keller-Williams and Royal LePage Solutions. Since marrying Vince, it looks like she isn’t really active in the real estate industry. Besides, many of you may not know that Kyla’s mother-in-law, Sharon Eileen DePalmo is a renowned real estate agent and a stock manager.

When and how did Kyla and Vince first meet?

It was back in 2009 when tabloids first reported Kyla and Vince’s romance. However, to this day there is no valid info as to how did they meet. While some sources suggested they met in May 2008 while vacationing in Venice Beach, CA, and some say they met on a beach in Italy.

In addition, a thread in forums.beyond.ca even suggested that they were introduced to each other by one of Vince’s producer friends. But wait the report doesn’t end here as many authentic sources like Vancouver Sun claims they met at a mutual friend’s wedding party in Los Angeles.

Well, we can debate all day but the fact of the matter is that it doesn’t really matter how did they meet. What matters is how they are living their lives and to be honest, they are simply relishing their time as a husband a wife.

Moreover, during the initial of their relationship, Vince was totally head over heels for his girlfriend. In an interview with Ellen DeGeneres, he said, “She makes me laugh. She is wonderful. I’m just thrilled.”

Their Engagement and Wedding

Shortly after news of their romance came to the public domain, the duo got engaged. Vince proposed to his then-girlfriend now-wife with a $125,000 four-carat diamond ring. He chose the eve of Valentine’s Day to pop the big question which is quite romantic. A source at the time said, “They could not be happier.”

A year after getting betrothed, the couple exchanged vows on January 2nd, 2010 in a very small ceremony in Chicago. Only the closest of their friends and family were in attendance to bless the newlyweds. The matrimonial was held at a historic mansion.

The lovebird is a proud parent of two kids

From their marriage of a decade, Vince and Kyla are proud parents of two beautiful children, a girl named Lochlyn Kyla Vaughn and a boy named Vernon Lindsay Vaughn.

Their daughter came into this world on December 18th, 2010. Meanwhile, their son Vernon was born on August 7th, 2013. Their baby boy shares the same name as that of Vince’s father and American actor, Vernon Vaughn.

Before the birth of their first child, Vince told in an interview about how he has decided to become a father now. He said, “She’s a civilian, which is good.”

Kyla together with her hubby and kids rarely make public appearances. From the beginning of their relationship, her partner has always been very serious when it came to his family’s privacy. This is why he was really ecstatic to announce that his girlfriend is a civilian and not some famous celebrity.

There are reports that before she exchanged vows with Vaughn, she was married to a guy named Ken Webber. However, due to a lack of valid information, it seems the news is nothing but a hoax. On the other hand, her husband was once famously in a relationship with actress, Jennifer Aniston.

How much is Kyla Weber’s net worth?

She was working as a real estate agent for several years and one thing that we all know is realtors earn a lot of commission. This implies she lived a fairly luxurious life. Furthermore, after marrying Vince, her lifestyle became more lavish as her lover boasts a net worth of $70 million.

In addition, Vincent was raised in a wealthy family so money is never an issue for the Vaughn family. What’s more, Kyla and Vince own a few houses around the states and in Canada. Back in 2018, he sold his pedigree pad at L.A.’s Nichol Canyon for a whopping $2.46 million. Having being born to a realtor mother, the Swingers star invests a lot in real estate.