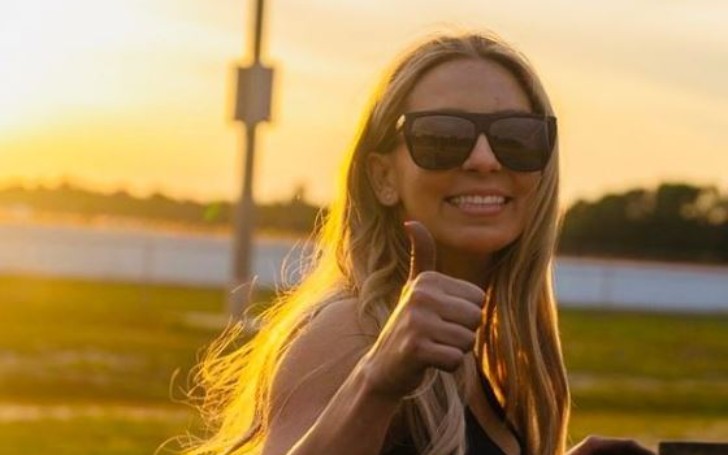 Lizzy Musi is an American race car driver and a TV star. She became famous for her role in the hit TV series, Street Outlaws. The show takes a life inside the world of illegal drag racing.

The TV star featured as one of the drag drivers who features in the show. The beautiful blonde has been able to garner a massive fan following, especially amongst men, thanks to her driving skills.

Many of her fans are curious to know more about her personal life. Well, today in this article, we’re going to take a close look at Lizzy Musi’s relationship status, her early life, siblings, and more!

She was born on January 1st, 1991, in New Jersey, the US. Her father Pat Musi is from New Jersey, while her mother, Elizabeth Agneta Musi is from Stockholm, Sweden. Her parents first met when her dad Pat went to Sweden for a racing event.

Lizzy belongs to the mixed ancestry of English and Swedish. Further, she has American nationality.

She was brought up in Carteret, NJ where she graduated from Carteret High School. After finishing high school, she didn’t enroll in college and immediately started working at her father’s garage.

If you’ve been following Lizzy for some time then surely we don’t need to remind you that this girl has been gifted by the heaven itself, both mentally and physically.

Lizzy comes from a family of racers

But soon he called it quits because of his failure to land a sponsor. In an old interview with Sun-Sentinel, he said, “There was just no money. I couldn’t keep it up anymore.”

His career took a major turn around when he started working behind the scenes. He began to build engines for the drag racers and eventually his machine shop, Pat’s Speed Center.

Some times later he also returned back to the racing scene. He won the Pro Street championship eight times along with lots of other trophies.

As of now, Pat works at the Pat Musi Engines. He relocated to Mooresville, North Carolina in 2012.

Lizzy’s sister is also a racer

Aside from her father Pat, her sister Tricia Musi, born April 5th, 1992, also followed in their father’s footsteps. She is the winner of the 2019 Nitrous Pro Street Champions. She won the race in her dad’s ’99 Trans Am.

In 2019, she also earned a spot on the 30 under 30 lists. Tricia has stated her desire to join the Pro Nitrous ranking with her older sister Lizzy. Moreover, Tricia admits that moving out of her dad and sister’s shadow took a lot of hard work but she was able to do it.

She started her career in the late 90s. She raced in Jr. Dragsters from 1999 through 2007.  She then moved to the category of Top Sportsman where she finished fifth in the ADRL series back in 2013.

Then a year later in 2014, she made her Pro Nitrous debut, driving the all-famous King Kong 5, a 2009 Dodge Stratus. Lizzy is also the first woman to win Pro Nitrous and also holds the speed record of 209.23 miles per hour.

In October of 2019, she set another speed record of 208.62 miles per hour in 3.615 seconds at the Professionals Drag Racers Association Fall Nationals in Darlington, SC. For the past couple of years, Lizzy has been sponsored by Edelbrock.

After her dad stepped away from the day-to-day operation of their company, she took over the operation at Pat Musi Racing Engines. Despite handling such a big chunk of work, Musi remains humble. Talking about her work, she said in an interview with DragIllustrated,

“It’s really a family effort, a family team here. I handle mostly the parts and part orders and invoicing and e-mails and all that; my sister and my mom do the paperwork stuff and my dad gives me the orders. So it’s basically like a big teamwork deal.”

She is definitely juggling her business and her career pretty well. She is dedicated to juggling the onslaught of demand in PMRE and also giving time to her rapidly progressing career.

Lizzy Musi Crashes and got engaged on the same day

It’s evident that when you are involved in such a profession then there is bound to be the risk of accidents. Throughout her career, she has been involved in a few crashes. Like back in 2012 during the Summit Racing Top Sportsman, she lost control of her 1968 Chevrolet Camaro. She came out unscathed from the accident.

In 2021, she was once again involved in an accident. During the first round of Street Outlaws No Prep Kings at Darlington Dragway, her car violently crashed into the guardrail. She battered her car but this time as well, she came out virtually unharmed. She even came out of the car and showed thumbs up to the cameras.

As unfortunate as the incident was, one thing came out good, she got engaged to her boyfriend. More on this down below!

Lizzy Musi Boyfriend: Who is she dating?

As of now, she is in a relationship with Kye Kelley. The couple has been dating since 2017. Talking about their first meeting, they were introduced by Lizzy’s dad Pat when Kye was at their shop.

Lizzy talked about her first meeting with Kye and said, “My dad introduced me to him, and we just became friends. He was pretty down-to-earth, seemed pretty cool, and it just started from there.”

For many of you who might know this, Kye also features in the TV show, Street Outlaws as one of the drivers. Their shared interest in racing also served as a catalyst for their strong relationship.

Furthermore, the pair is also engaged to be married. Kelley proposed to her the very day she got into an accident.