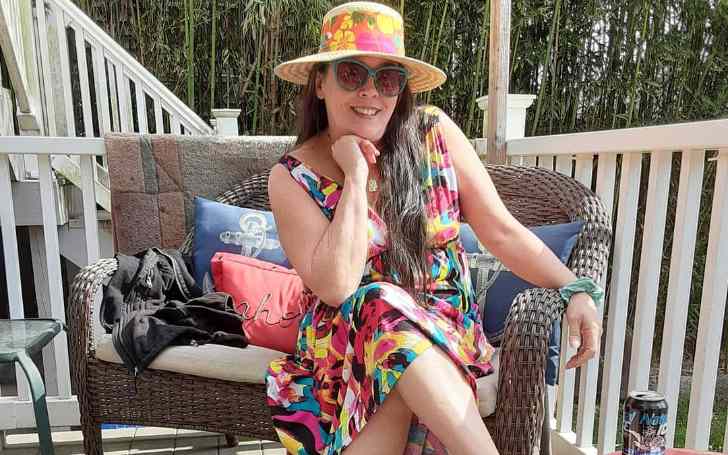 Julia Arnaz is recognized as the daughter of an American actor and musician Desi Arnaj Jr. (aka Desiderio Alberto Arnaz IV). Further, Julia is equally known for being the granddaughter of I Love Lucy stars Lucille Ball and Desi Arnaz.

Despite being the celebrity child, Julia lived her first 20 years without knowing her paternal family background. Her mother raised her out of the spotlight however later she made her way to her father’s family who were renowned actors in Hollywood. Interestingly, with the DNA result, Arnaz got authenticity as Desi Arnaj Jr.’s biological child. Well, after that, did her famous father accept her? Apart from her paternal family background, what about her personal life? Is she married?

Today, in this article, we have come up with the untold details on Lucille Ball’s granddaughter Julia Arnaz. Read the article till the end.

How Old Is Julia Arnaz? Her Parents And Early Life

As of 2023, Julia Arnaz is 52 years of age. She was born to her father Desi Arnaz Jr. and her mother Susan Callahan-Howe in July 1968 in Los Angeles, California. As aforementioned, her father is an actor and musician while her mom Howe was a model.

At the time of her birth, her parents were just 15 years old, and following her birth, her parents decided to separate ways.  After that, Julia was raised single-handedly by her mother Susan in Stamford. All her early life, she was devoid of her father’s love and his identity. All she knew about her dad was that he is the son of a Hollywood Celebrity which her mom told her while growing up.

Julia Didn’t Know Her Father Until She Was 20; She And Her Dad Underwent A Paternity Test

Julia lived her early life outside of the Arnaz family. But, after she grew up, she decided to take matters on her own and went to court with an appeal for a paternity test with her yet unidentified father Desi Arnaj Jr.

In an exclusive talk with PageSix, she told

“We did a DNA test when I was 20 and it came back 99.97% that I was indeed his daughter and then shortly after that my father and I started a beautiful relationship,”

After Julia’s father discovered her as his child, he then stood strong by her side. In this regard, Arnaz further said,

He helped me very much through my life and helped my daughter through college.

Before Julia’s dad discover her as his biological child, he was already a father to his adoptive daughter Haley Arnaz.

Career: What Does Julia Arnaz Do For A Living?

Moving on to her profession, Julia Arnaz is an entrepreneur as mentioned on her Facebook. The 52 years old celebrity child works as a Dog walker and pet sitter.

On the other hand, her famous father, Desi Arnaj Jr. is a musician and actor. He began his career at the age of 12 as a drummer with the American trio Dino, Desi & Billy with other members like Dean Paul Martin, and Billy Hinsche. Later, he also tried his hand at acting and did several series and movies like Billy Two Hats, The Streets of San Francisco, The Mambo Kings, and many others. As an entertainer, Desi was active till 2012.

Is Julia Arnaz Married? If Yes, Who Is Her Husband?

Lucille Ball’s granddaughter Julia Arnaz is a married woman. She is married to her husband Albert Massey. The couple tied the knot in September 2013.

On September 14, 2021, by posting a picture with her husband on her Instagram, she wrote

Anniversary vacation 8 years with my groom.

Coming up to 2023, it’s been around a decade since they are together as husband-wife. The couple is beautifully leading their marriage to date. Time and again, Julia keeps sharing her moments with her husband on her social media account.

On December 17, 2018, she shared a photo with her hubby on her Insta, she wrote, “My loving husband Albert“. As per the information on her Facebook, the couple for the first time met each other in December 2012. Following their first meet-up they probably started dating. After a year of their relationship, the duo exchanged vows.

Julia Was Married Before; She Lost Her Husband In A Swimming Accident

Before tying the knot with Albert, the musician’s daughter was married before with her husband whom she lost in a swimming accident. The information about her late husband is not known however, once in an exclusive talk with People, she mentioned her late husband’s death. She told,

“I lost my husband, my late husband, in a swimming accident, so I’ve had my endurance with tragedy,”

Before her marriage to her late husband, she was in a relationship with her former boyfriend named Mario Anzalone. The former flames even welcomed a daughter together.

Julia Arnaz Is A Mother Of A Daughter: She passed away unfortunately

From her relationship with her ex-boyfriend Mario Anzalone, Julia welcomed a daughter named Desiree S. Anzalone on September 15, 1989. She gave birth to her daughter in Norwalk, Connecticut.

But sadly, Julia’s only daughter Desiree is no more in the world. Remembering her, Arnaz talked about some fond memories. She was incredibly close to her late daughter Anzalone. Regarding this, she said

“She was so special. All our children are special, but this little girl was something else. We were [best friends].

Remembering her daughter, Arnaz couldn’t stop herself to praise her child. She further said,

“She was so beautiful, just so so beautiful inside and out,” “She really, really reminded me a lot of my grandmother, more so than I.”

Her daughter was a photographer and singer who passed away in the year 2020. Let’s see what was the reason behind her death.

Arnaz’s Daughter Tragically Died At The Age Of 31; What Was The Cause Behind Her Death?

The death of Julia’s only daughter tore her apart. Recalling her daughter’s death, she told People,

“watching her slip away was just, I wouldn’t wish it on my worst enemy. No mother should have to watch that.”

Actually, her daughter Desiree had breast cancer. At the age of 25, she was first diagnosed with stage 2 breast cancer. Since then, she was continuously battling against cancer but her tumors were getting bigger every day, and even after chemotherapy and surgery, she couldn’t win her battle. In this regard, her mom Julia told,

it was starting to spread a lot more, and the tumors were getting bigger,  And this time, they did the surgery and came back 12 hours later and [said], ‘You’ve got days, if hours.’ So that was really tough.

No doubt that losing such a beautiful child at this age was heart-wrenching for Julia.

Shortly after her daughter’s death, Julia lost her mother as well. Her beloved momma Susan died in January 2021 amidst COVID-Pandemic due to which Julia wasn’t able to sit at the side of her mother in her final days. She told People,

“The COVID-19 kept us apart, so I wasn’t able to see her as much as I usually do because she was compromised and I didn’t want her getting sick in any kind of wa.”

“So I wasn’t able to spend as much time with her as I normally do because of the COVID since March. I mean, I saw her, but not as much; we’d hang out every day practically she was here. Plus, she lived with me for a while.”

While she was still grieving her mom’s death, her daughter’s death broke her from the inside.

After she lost her daughter to breast cancer, instead of grieving the huge loss, Julia is actively raising awareness for breast cancer. Regarding this, she said,

“to give awareness for young girls her(Julia’s daughter) age because this does happen. It’s rare, but it does happen.

Arnaz said she wants to make people aware that even at a young age, girls can get diseases like breast cancer. She further stated,

“It’s just not talked about a lot. It’s usually people in their late 30s, 40s, 50s — not somebody at this age. “So that was something that she really wanted — to help other women like her. A preventative, really.”

In her town in Connecticut, she showed up for October’s Breast Cancer Awareness. She also has built a foundation in her daughter’s name that worked for awareness of breast cancer.

Arnaz Loves Animals; She Has A Pet Bird

Julia absolutely loves animals. In her home, she has a pet parrot named Oliver.

Just a girl and her bird. Love my African Grey Parrot 🦜 😍 Oliver and i are best friends

Back before, she also had a pet dog JaMilford in her house. Now as per her caption “JaMilford took paradise“, her dog has already died.

Julia Arnaz Net Worth; How Rich Is She?