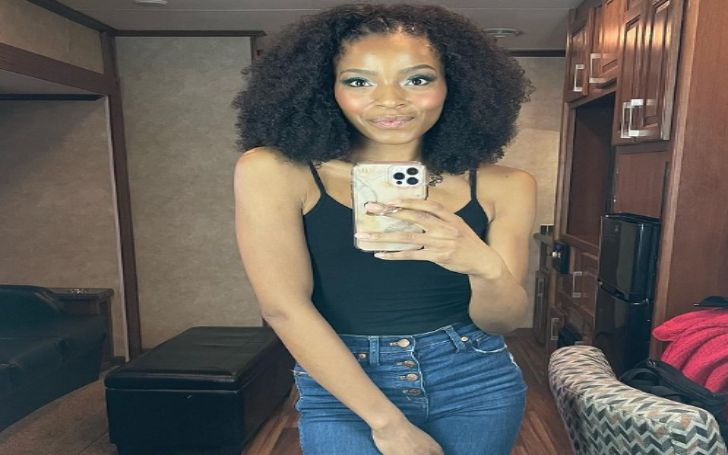 Margaret Odette is a renowned Haitian/American model, actress, social media influencer, and television personality. While she has appeared in many movies & TV series, she is primarily known for her role as Sasha in Sex/Life.

Similarly, besides acting in movies, she is also known for being a great businesswoman. But apart from her professional accomplishments, Margaret has remained very secretive about her personal life. So, is she married or dating a boyfriend?

In this article, we will find out in detail about Margaret Odette’s childhood details, education, age, career, and much more.

Who is Margaret Odette? Her Childhood and Educational Details

Margaret Odette was born in Harlem, New York City, the United States on September 28. While she has not revealed the exact year, she was reportedly born in the late 80s. Talking of her age at present, she is in her 30s. Her zodiac sign is Libra.

Growing up, Odette spent the majority of time with her parents, & has a closely knitted relationship with her family members. In fact, she is still very close to her mother. Back in June 2019, she shared a series of adorable photos along with her mother which reflects the love they have for one another.

Talking about her education, Margaret who was fond of acting from a very early age, studied at the British American Dramatic Academy in Oxford, England, to pursue her dream of acting. Later on, she completed her Masters in Fine Arts (MFA) degree from the Tisch Graduating Acting NYU.

Odette Was A Theatre Actress & Model Before Becoming An Actor

Margaret as we said earlier was into acting from a very early age. During her time at the Tisch Graduating Acting NYU, she used to perform on various stages and also in theaters.

Similarly, she became the first black woman to play ‘Hero’ in Shakespeare’s play Much Ado About Nothing at a public theater in Central Park in 2019. NYU Tisch Grad Acting also congratulated the actress by sharing a post on June 25, 2019, saying:

“Congratulations to Margaret Odette (’17) and Erik LaRay Harvey (’91) on an incredible run of ‘Much Ado About Nothing’ at The Public’s Free Shakespeare in the Park!”

Later on, she also did multiple theatre shows including Skeleton Crew, A Midsummer Night’s Dream, She Kills Monsters by Qui Nguyen, Paradise Blue, and others.

Before becoming the megastar that Margaret is now, she was also a model, working for various fashion companies.

Margaret Odette Has Appeared In Many Movies & TV Series

Her acting career began when she debuted with the short TV series Yasmin The Show in 2012 and What It Was in 2014. However, she was in the limelight for her 2015 movie Sleeping with Other People where she played Thea. Afterward, Odette did series like Elementary (2018), Instinct (2019), and Blindspot (2020).

Likewise, the multi-talented actress’ Margaret’s performance in the Boogie (2021) was praised by many people. Soon after that, she played the role of Sasha Snow in the Sex/Life TV series which became a huge success. The Netflix series began in 2021 and was nominated for the People’s Choice Award.

Besides her acting career, the Sex/Life star is also known outside the curtain for her work in helping other black women to progress thoroughly in the field of acting. She is the co-founder of GABB, a group to help Black women who have completed the training course at Tisch School of Arts. Additionally, she is also the co-founder of Homebase Theatre Collective, a community consisting of directors and actors from NYU Tisch and Juilliard.

Does Margaret Odette Have a Boyfriend? Her Relationship Status

As a successful actress in the entertainment industry, a lot of her fans have obvious curiosity about her love life. So, does she have a boyfriend? Or is she already married?

Well, Margaret is a very private person, & hasn’t shared much information about her personal life. Apparently, she is single and isn’t in any relationship at the moment. Moreover, the actress has also never married and does not seem to have any such plans anytime soon.

She seems to be more focused on her career at present. Anyway, we would love to see her with a partner of her choice.

What Is Margaret’s Net Worth?

The multi-talented actress is pretty good at what she does and is estimated to have a net worth of anywhere between $4 million to $5 million. Well, her fortune is pretty obvious since she has been a part of some successful movies and TV series.

Is Margaret Odette on Instagram? Her Social Media Presence

The famous actress is frequently active on Instagram. She has about 67.1K followers on the platform. Similarly, Margaret is also active on Twitter, however, her account is private.