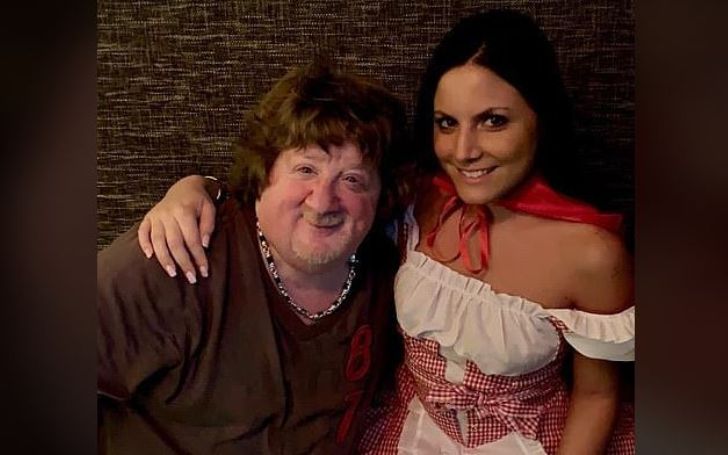 Sarah Russi is an adult model and online adult entertainer, famous as the girlfriend of Mason Reese. She is also an actress, known for the TV series Palo Alto (2014), and other similar projects like Party Day Massacre Stories (2018), and Crois-moi (2012). Moreover, she has more than 350,000 followers on her Instagram.

Besides, Sarah often makes headlines as the girlfriend of a former child actor Mason Reese. Her partner, Reese appeared in over 75 commercials in the 70s and was also a recurring guest on the Mike Douglas Show from 1973 to 1980. Russi’s boyfriend Mason rose to fame due to his work in various commercials, particularly Underwood Deviled Ham, Post Raisin Bran, and Dunkin’ Donuts.

Seven of his commercials went on to win Clio awards, including the coveted best male actor Clio. What’s more, the millionaire, who resides in New York, is 4 ft 10 in and previously owned several restaurants and bars. He had three establishments in New York – Paladar, Destination Bar and Grille, and The Luxury Box, though all of which are now closed.

Reese additionally is the son of William Reese and retired actress Sonia Darrin, who became a restaurant entrepreneur following her acting career. Mason and Sarah are those kinds of couples who have a significant age gap with the latter being 27 years younger than the former and they are used to getting looks and stares when they go out in public.

And obviously, the 57-year-old Mason Reese and Sarah Russi, 29, don’t look like an average couple. The pair, however, has often so much to say about their bondage. Know all of them in the write-up below whilst also reading an extended description of Mason’s girlfriend life, Sarah Ruse, her early life, career, how she met her boyfriend? and more.

Sarah Russi Is From Manhattan

The beautiful Sarah is apparently is a native of Manhattan, New York though she has also lived in Pittsburgh, Pennsylvania.

However, for all the interviews and candid conversations she’s had, Sarah is yet to shed a light on her upbringing or her parental specifics.

As mentioned Russi is an adult model and online adult entertainer. To say more, she is an adult and webcam model. She, however, has also worked as a sugar baby in the past.

Russi used to be a woman who accept gifts from older men often in the form of money, rent or mortgage payments, travel expenses, shopping sprees, and a plethora of other niceties.

Russi apparently also gets $100 to $150 per hour from her camming jobs. The brunette online model is represented by adult entertainment publicist Lainie Speiser. Explaining how she got into the business, Sarah once said that she had always wanted to date older men and make money.

Sarah Russi Is Mason Reese’s Girlfriend: How Did They Meet?

In an interview with This Morning in June 2019, Sarah explained that it was a friend of hers who turned her attention to Reese and told her he was a child actor. She however was unfamiliar with Reese’s work, so she looked him up before sending the actor a Facebook friend request — which he accepted.

Russi said after the Life Interrupted star liked a few of her pictures, the pair began getting to know each other. Reese met the ex-child performer in Los Angeles at an adult convention.

They started off their relationship in 2018 after meeting at the Chiller Theatre Expo, a horror and pop culture convention, in New Jersey.

There, Russi was working, signing modeling posters, and taking pictures with fans. She in fact was on a date with another guy, an actor. Sarah though ditched him and went with Mason.

The man and Mason apparently were also friends with each other. When she was about to meet Mason, Sarah was living in her Pittsburgh apartment.

In the beginning, the couple agrees it was innocent, playful flirting. Mason says after meeting Russi, he called her every day he was in town over the course of a month.

He admits when Russi first expressed interest in actually being in a relationship with him he found it just as shocking as anyone else. Sara once said after their first date, their relationship progressed rather quickly.

Russi once also revealed Reese has even already met her parents and her father is a big fan of the actor. As for Reese, he says despite their age difference their relationship has taken off since the pair first met.

Is Sarah Russi Planning To Get Married?

Talking about the probability of getting married, Russi told FOX in June 2019,

“I do want marriage at some point. We made a deal that if we were still together in two years that we would get married and we talked about getting promise rings.”

Reese as for himself said while their relationship definitely is a commitment type of thing he has never really felt the rush to get married.

Sonia Darrin’s son added it’s not something that has ever been that important to him. He, though, stated Sarah looks at it in a much more convenient manner than he does.

They nonetheless do have plans to get married. The couple reportedly also has promise rings tattooed around their fingers for that. The couple apparently, however, isn’t looking for kids.

Sarah Russi And Mason Reese Have Been On Several Shows

Mason and Sarah additionally have also done interviews and appeared on television to talk about, and in some cases defend their relationship. The couple appeared on ITV’s This Morning on June 20, 2019, to talk about their love for each other. The pair has also been on a reality spin-off of Extreme Love called Love don’t Judge where they gave a glimpse into their relationship.

In their “Love Don’t Judge” episode, Sarah talks about her career as an adult and webcam model, saying that it’s not just a sexual thing for her but she also enjoys getting to know people.

While Mason apparently gets uncomfortable sometimes, he admits to being very supportive of Sarah and her profession. He has said he’s not jealous of his girlfriend talking to other men.

While the couple has never shared each other pictures on their social media handles, they are still very much believed to be together and residing in NYC.

Is Sarah Staying With Mason Reese Just For Money?

Reese has admitted that a lot of people have asked her if she is really with him for no money. Although Sarah has previously been a sugar baby, she maintains that her relationship with Mason is strictly personal.

She often blasts suggestions that she’s with him for money, despite dating sugar daddies in the past. Sarah once hit back at claims she’s using Mason as a Sugar Daddy by declaring that she doesn’t ask for his money.

Responding to the allegations that she was dating Reese only for his money and lifestyle, Russi said,

“It doesn’t really matter what they think because Mason and I really love each other and that’s all that really matters at the end of the day. They can’t take that away from us. But, just because I was a sugar baby, doesn’t mean that I’m after his money. I think a lot of girls today are actually sugar babies.”

Russi says she is really happy with Mason and she doesn’t ’t need to be with him for his money. Not to mention she also runs her own fan page, where she provides elicit images at a cost of $14.99.

As for speaking about being a sugar baby, Russi said,

The online adult performer, though, added ever since she started talking to Mason she just decided that she didn’t want that anymore. Now the model with an “only fan” account says she is happy to be in a relationship with him.

What Does Mason Reese Say About His Girlfriend Sarah Russi Staying With Him?

Reese, too, has defended his girlfriend against critics criticizing the couple’s age gap and calling her a “sugar baby.”

He also claims to have never given a dollar to Russi. Instead, it is Sarah who apparently showers the former Dunkin Donuts face with nice things.

‘She’s bought me beautiful gifts, and spent time with me and money on me, so I don’t feel that’s the basis of our relationship at all,’

said Reese to Mirror in June 2019. Mason and Sarah insist that they are madly in love with each other.

Once in an interview, Reese said Russi finds it hard keeping up with him in the bedroom. Reese at the time said – of the two, he’s the one who has a bit higher sex drive

The child star of the 70s added while sometimes their schedules don’t match up, they nonetheless have sex twice a week.

“We have sex an average of twice a week. I might be happier with three [times a week]. But twice is a good compromise for me,”

said the former guest on the Mike Douglas Show.