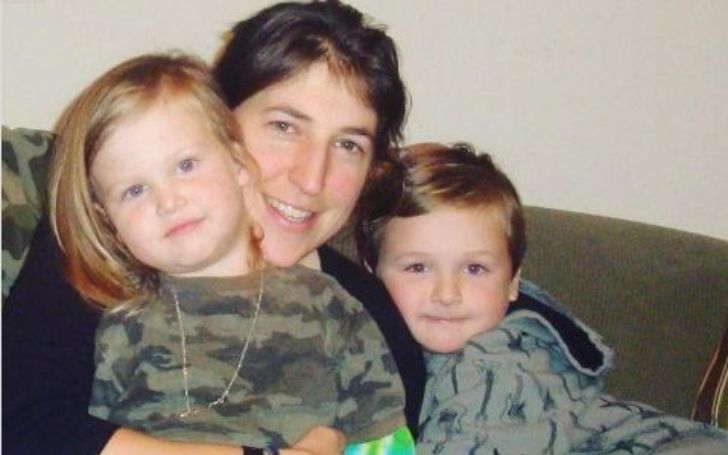 Just like his brother Miles Roosevelt Bialik Stone, Frederick also maintains a lowkey lifestyle and is rarely seen in public. His mother Mayim Bialik is an actress, author, and game show host by profession. On the other hand, his father Michael Stone is reportedly a businessman.

Here, take a look at the star kid’s childhood, his upbringing alongside his older brother, and more. Does Frederick Heschel have down syndrome? Tag along with us to find out more about the future possible star.

He was born on 15th August 2008 with the star sign Leo. He is the second son of millionaire actress Mayim Bialik and businessman father Michael Stone. Heschel holds the American nationality and has mixed ethnic descent. Moreover, his mother’s side of the family is Jewish and originally migrated from Polan, Czechoslovakia, and Hungary.

What is Frederick Stone’s Age?

The second born Frederick Heschel Bialik Stone is 14 years as of 2022.

Talking about their educational qualifications, Frederick and his brother Miles are homeschooled. As per their mom herself, they’ve “never been in a traditional school setting“.

During the Covid-19 pandemic and even before that, Mayim taught her sons at home. She says,

“My younger son is very, very artistic but also really likes science and retains information really well. He took a class that I taught last year at 11.”

She continued, “Both of our boys actually like Shakespeare very much and have taken Shakespeare for several years,”

Does Frederick Heschel Have Down Syndrome?

Due to his rare public appearance, many fans began to speculate that Frederick had down syndrome. Even though he was born a healthy baby boy weighing 7 pounds, 15 ounces, and measuring 20 and a half inches in length, the rumors were circling around.

To clear the air, Heschel doesn’t suffer from the illness. He was born at home after a swift and natural one-and-a-half-hour labor. He was reportedly delivered without his mother’s water breaking which is also known as “birth in the caul” (amniotic sac).

As per Mayim’s YouTube video, Frederick tripled his birth weight by the end of the first year. In addition, he is a lefty.

What does the name Frederick mean?

According to various online tabloids, Frederick’s name is an English version of the German name Friedrich which means ‘peaceful ruler’ or ‘calm ruler’.

Similarly, his middle name Heschel reportedly means ‘Deer’ in Yiddish. Moreover, his mother Mayim’s name is from the Hebrew language which means ‘water’.

The parents of two children first crossed paths while attending the University of California, Los Angeles. They were calculus buddies and racquetball partners back then.

The two talked about marriage on their very first date and Mayim let him know about her commitment to Judaism. She also revealed that she told Michael the same day that she could only marry a Jew.

Fast forwarding, Stone converted to Judaism after dating Bialik for five years in order to marry her. Though he was raised as a Mormon by his family, they fully supported his decision and the pair exchanged their marital vows.

The lovebirds exchanged wedding rings on 31st August 2003 in a Victorian-themed ceremony in Pasadena, California. Their nuptials were attended by their close friends, family, and relatives.

In 2005, they added a bundle of joy to their family, son Miles Roosevelt Bialik Stone. Likewise, their second bundle of joy, Frederick Heschel joined the family in 2008.

While the family of four was living a happy and healthy life, Mayim filed for divorce in November 2012.

Why Did Mayim And Stone Separate After A Decade-Long Marriage?

The Blossoms actress filed for divorce in November 2012 citing irreconcilable differences. She announced the separation via her parenting blog where she wrote,

“Divorce is terribly sad, painful, and incomprehensible for children. It is not something we have decided lightly,”

“The main priority for us now is to make the transition to two loving homes as smooth and painless as possible. Our sons deserve parents committed to their growth and health and that s what we are focusing on.”

She concluded with: “Our privacy has always been important and is even more so now, and we thank you in advance for respecting it as we negotiate this new terrain.”

The couple’s divorce was finalized by the judge six months later on 1st May 2013. Ever since then, Stone and Bialik share legal joint custody of their sons and co-parent them together.

After staying single for eight years following the divorce, the Call Me Kat actress found new love with poet and writer Jonathan Cohen.  The pair first met at a party while Mayim was still married to her first husband Michael.

The lovers currently co-host a podcast, Mayim Bialik’s Breakdown together where they talk about loneliness, mental health, and how to cope with them.

Besides this, Cohen is the co-founder of Lotic AI, a behavior change company delivering Enhanced Human Insight and helping users take control of their mental well-being through the app.

Moving on to his father, Michael is also reportedly dating someone new whose identity is currently hidden from the media.

As mentioned at first, 47-year-old Mayim Bialik is an actress and author. She is widely popular for playing Amy Farrah Fowler on the CBS sitcom The Big Bang Theory alongside Johnny Galecki, Jim Parsons, Kaley Cuoco, and Simon Helberg.

Not to forget, Bialik was nominated four times for the Primetime Emmy Award for her role as Amy Farrah. Similarly, her other well-known acting credits are Blossom, Molloy, The Adventures of Hyperman, and Call Me Kat.

Unlike other celebrity parents, Mayim takes time out of her life as much as she can to spend quality time with her sons. The actress teaches her sons how to play the piano, violin, bake, and other kinds of fun stuff.

She has even uploaded videos of the three baking on her self-titled YouTube channel. In the video, we can see how the Bialik-Stone brothers are eagerly learning, interacting, and having fun with their mom.