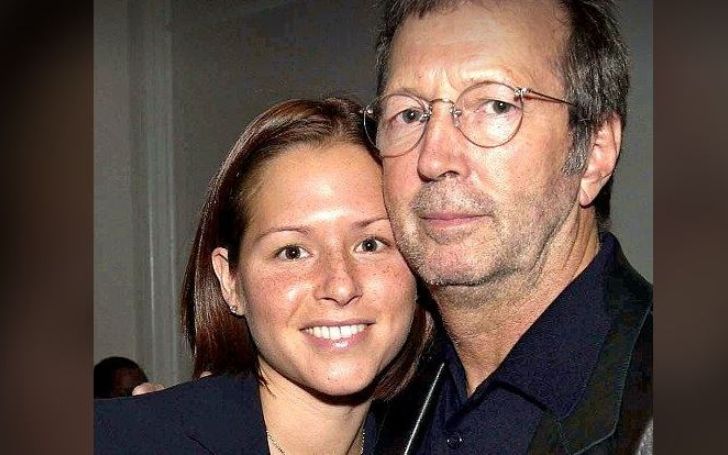 Melia McEnery is the owner of several non-profit and social organizations. She though is better known as the wife of Eric Clapton, an English rock and blues guitarist, singer, and songwriter. People widely regard McEnery’s husband, Clapton as one of the most important and influential guitarists of all time.

As for Eric’s wife, she is in a way a girl from a small town who came to make it big in LA but instead found herself commencing a family with the Wonderful Night singer. Know how it all began for Melia in the write-up below. Also read about her early life, her happenings, and some add-ons details.

Melia McEnery Early Life; Who Are Her Parents?

McEnery, the wife of the 18-times Grammy winner, was born on February 1, 1976. The currently 46-year-old red-haired is from Columbus, Ohio.

She is one of her parents’ six children. Melia’s father was Scottish-English and her mother was Korean-Irish.

She is the granddaughter of Walter McEnery of Bonita Springs, Fla. Her father was allegedly a construction worker, and her mother was a homemaker. McEnery, an American, apparently went to Bishop Watterson High School. She reportedly also has a degree in art.

After college, she moved to California and allegedly joined the design industry for two years. She did use to be a graphic artist and also briefly worked for her father’s contracting business. After some time, she landed the job of an assistant at Giorgio Armani for her career.

In the meantime, she also worked as an event planner. Mcenery as of the present is a social worker and philanthropist. Currently, the wife of the British singer works as a Senior Clinical Advisor for Crossroads Centre Antigua. The organization helps people with both drugs and alcohol issues.

McEnery married the Tears In Heaven singer, Eric Clapton in January 2002 at St Mary Magdalene church in Clapton’s birthplace, Ripley. Melia who was then 25 wed the Brit Award winner in a private New Year’s Day ceremony.

None of the guests who attended their wedding knew it was the marital ceremony of McEnery and Clapton that were witnessing.

In fact, the couple had initially invited the people to partake in the baptism of their daughter Sophie Rose, at the Chapel of St Mary Magdalene in Ridley, England.

Right after the guest believed they had seen the end of the ceremony, the Cocaine singer and his partner announced they were also going to get married at the very moment.

In addition to three kids, with Melia, Clapton also has one daughter, named, Ruth from his previous relationship with recording studio manager Yvonne Kelly.

Clapton in actuality had an affair with Kelly; at the time, Eric was the husband of model Pattie Boyd. Additionally, he had one more kid, a son named Conor from his other relationship with an Italian model, Lory Del Santo.

The boy, however, tragically lost his life in March 1991 after falling out of an open bedroom window on the 53rd floor of a Manhattan apartment building. The incident later inspired Melia’s husband’s hit song, Tears In Heaven.

Through her husband, Melia is also step-grandmother to Isaac Eric Owen Bartlett. He is the son of Clapton’s oldest daughter Ruth and her husband Dean Bartlett.

McEnery had met Clapton in 1999. She was then an administrative assistant in Los Angeles. McEnery had just left Ohio with her high school boyfriend to try her luck in Tinseltown. The meet-up between the Columbus native and Eric happened at a party given for the Surrey-born artist after a performance.

This was in fact a success party for Eric by Giorgio Armani. Getty

Melia, however, being one of the party organizers, had strict orders about not interacting with any guests. She, nonetheless, still went to Eric to ask for an autograph which she said was for her uncle. After that, the couple quietly dated for a year and went public with their relationship only in 1999.

Although they broke up after a year of dating, the pair soon patched things up. After starting their relationship in 1999, they broke up briefly in 2000 but later quickly reconciled, and had their first daughter, Julie Rose, in June 2001. Some reports suggest the couple actually met at a 1999 Los Angeles charity auction.

Although the couple over the last few years has appeared by each other’s sides a lot fewer, Melia and Clapton are supposedly very much together.

The last time, Melia’s singer-husband mentioned his wife was in Nov 2020; the Rock and Roll Hall Of Fame inductee used his Facebook to talk about his wife’s charitable movement.

What Does Melia McEnery Do?

In fact, her whole life, Melia has worked on several charity movements. In 2020, she initiated a single project named ‘Be Here Now’ which featured Susan Tedeschi and Derek Trucks.

The whole proceeds of the project benefited Turn Up For Recovery foundation. Melia herself was the founder of the organization, a charitable movement using music to raise awareness of addiction.

Melia’s singer husband also occasionally supports his wife’s for-the-community works. He once contributed 100% of the profit from the sale of George Harrison’s song ‘Be Here Now‘ by Doyle Bramhall II feat. Susan Tedeschi and Derek Trucks -to his wife’s organization, Turn Up For Recovery.

McEnery Used To Date Another Guy

Before getting into a relationship with I Shot The Sheriff singer Clapton, Melia was dating someone else. His name was Chris Losinski. Losinski reportedly was a worker at a coffee shop. Both Melia and Losinske were in a long-term relationship.

At the time, she was training to become a graphic artist. She and Chris were together from high school.

The former, however, would fall for Clapton after meeting him in 1999. Following that, Clapton asked McEnery to marry him on Father’s Day.

Citing Melia leaving him for the English singer, Losinske said,

“The thought of what went on behind my back eats away at me like cancer. I feel so stupid for not realizing it. But I honestly thought she was the girl I would spend my whole life with. We’d even decided on names for our children.”

Losinske said McEnery left him with bell-bottom blues when she dumped him to be with Clapton. Melia’s former boyfriend stated Clapton would call the home the couple shared constantly to set up trysts.

Is Melia McEnery On Social Media?

While Clapton is quite an in-play on networking platforms like Facebook, Twitter, and Insta, the mother of his children, Melia is conversely less of a name in such domain.

She though gets her share of mention through the Facebook and Insta profile of Turn Of For Recovery every now and then. McEnery also often appears in one or two podcasts especially to talk about her non-profit works.