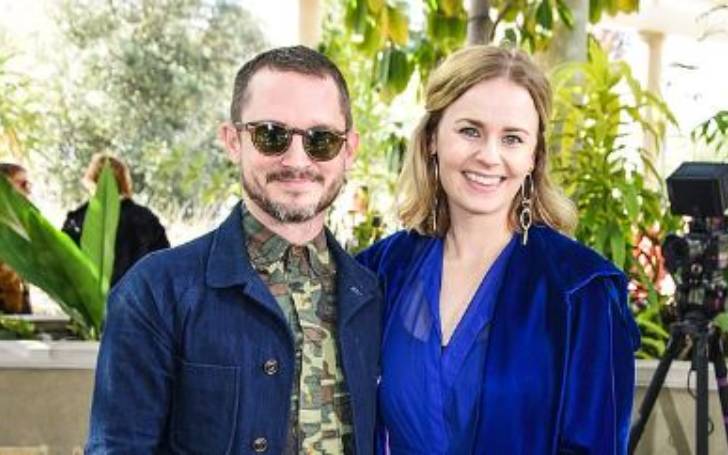 Mette-Marie Kongsved is a Danish producer and costume designer better known as the long-time lover of Elijah Wood. The lovely pair started dating in 2016 and share a son together.

The 31-year-old Kongsved is popular for her work in I Blame Society, Come to Daddy, Get Duked!, and Nine Days. Similarly, her baby-daddy is best known for playing Frodo Baggins in the Lord of the Rings film trilogy.

The pair worked together in the 2017 film I Don’t Feel at Home in This World Anymore. Today, let’s focus more on Mette-Marie Kongsved’s life, her career achievements, past relationships, and many more.

The costume designer Mette-Marie Kongsved was born on 10th May 1991 with the birth sign Taurus. She is 31 years old in 2022. Likewise, Marie is 5 ft 7 inches or 170cm tall in height. As per reports, Mette is Danish by nationality and has a mixed ethnical background.

Wood has Irish, Danish, German, and English ethnic descent. Likewise, Elijah grew up alongside his siblings, Zachariah and Hannah.

Mette-Marie Kongsved Started Her Career As A Production Assistant

The mother of one began her professional career as a production assistant in the 2012 film Between Us starring Julia Stiles, Taye Diggs, and Melissa George. The same year, she worked in the costume department for A Yellow Ribbon. Shortly after that, she worked in films like Cheap Thrills, The Raid 2, ABCs of Death 2, Mandy, and Apostle.

Mette-Marie made her debut as a producer in the 2017 film I Don’t Feel at Home in This World Anymore where her beau stars as Tony. Two years later, she produced two more films Get Dukes! and Come to Daddy.

Moreover, her most notable production work is the 2020 fantasy drama film Nine Days by Edson Oda. The film was shot in the state of Utah in less than a month’s time span.

It stars Winston Duke as the lead Will, Zazie Beets as Emma, Benedict Wong as Kyo, Tony Hale as Alexander, and others. The movie premiered at the Sundance Film Festival on 27th January 2020 and was released in select theaters due to the COVID-19 pandemic.

Born and raised in Iowa, Elijah began modeling and taking piano lessons at just seven. Due to his interest in the industry, his family (except for his father) moved to Los Angeles for better job opportunities.

Wood got his big break in Paula Abdul’s music video Forever Your Girl. He then landed a crucial role as Luke in the 1990 film Child in the Night.

Some of Elijah’s early acting works are Back to the Future Part II, Avalon, Paradise, Radio Flyer, The Adventures of Huck Finn, The Good Son, and several others.

Elijah’s fame skyrocketed after he was cast as Frodo Baggins in the 2001 epic fantasy adventure film The Lord Of The Rings. He starred opposite A-List actors like  Ian McKellen, Liv Tyler, Sean Astin, Orlando Bloom, and others.

Along with his acting career, Wood also produce films. His production credits are The Greasy Strangler, Many, Come to Daddy, Daniel Isn’t Real, Archenemy, and No Man of God.

As of 2022, he is all set to star in an upcoming superhero comedy horror film The Toxic Avenger alongside Peter Dinklage, Jacob Tremblay, and Taylour Paige.

A year later, the then-new couple worked on a film together. Likewise, in January 2018 they were spotted holding hands in Pasadena, California.

Similarly, the pair made their first major debut as a couple during the Rodarte FW19 fashion show.

Mette-Marie And Her Boyfriend Wood Welcomed A Child Together

After dating for about three years, the lovebirds announced that they were expecting their first child together in early 2019. As per Wood’s interview with Seth Meyers, he revealed that they found out about the pregnancy on Christmas Eve saying:

“I haven’t had a cigarette since Christmas Eve and that night, I found out we were pregnant. On Christmas Eve.”

In July 2019, Kongsved was spotted with her huge baby bump walking alongside Wood in Los Angeles. During their outing, Mette-Marie was glowing and was proudly showing off her baby bump in her beautiful orange dress.

The pair quietly welcomed their son in 2019. Though many online tabloids claim that their son’s name is Evan Kongsved Wood, Elijah and Kongsved are yet to confirm the news.

After Mette-Marie was spotted with a wedding band on her ring finger, fans left no time to assume that the couple got engaged privately.

Some even claim that they are husband and wife. However, no news of their alleged engagement and marriage has hit the news outlet. For now, all we can do is wait until they make confirmations about their engagement and wedding.

The Mandy producer was previously married to film director and screenwriter Evan Louis Katz aka E. L. Katz. The former husband and wife got married on 15th May 2011 and were together until 2017.

On the other hand, Wood was dating actress Pamela Racine. They were together for five years from 2005 to 2010.

What Is Mette-Marie Kongsved’s Current Net Worth?

The producer and costume designer earns a decent amount of money from her career. According to various tabloids, Kongsved’s current fortune is around $1 million.

Whereas, her boyfriend, Elijah Wood has a massive net worth of $20 million as of 2022. He earns his wealth from his acting career.