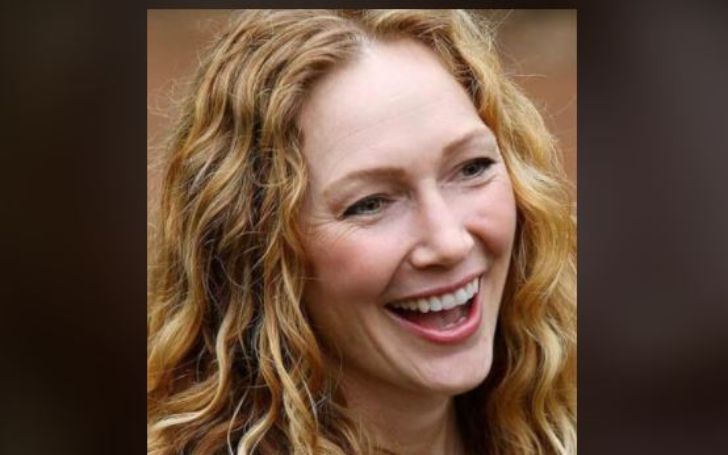 Jean Muggli is the former wife of ex-NFL star and a national TV show host, Michael Strahan. Muggli and Strahan were in a marital relationship from the mid -’90s to the mid-2000s. In between, they also became parents to two children.

A mid-westerner, Jean’s separation from Michael was anything but amicable with at some points, the couple looking like the worst match.  As former Giants star Michael Strahan is embroiled in a bitter custody battle with his ex, Jean

For a good amount of time, their split became fodder for the press. Take a look back at the bittersweet phases of Jean and her former partner’s relationship whilst knowing the exact origin of Strahan’s white wife, her history, the middle, and even the present.

Jean was born Jean Marie Muggli in the mid-’60s most probably around the year 1966; with some sources suggesting on November 30, 1964 (though the numbers lack credibility). Muggli’s parents birthed her in Carson, North Dakota.

What Does Jean Muggli Do For A Living?

She used to be a salon worker during the time when she met her now ex-husband, Strahan. Some believe Jean Muggli, as of the present, is a cosmetics store manager.

Further, a few stats from the late 2010s and a seemingly inactive Facebook account by the name of Jean says the now 57 or something alike-year-old served as the President/Domestic Engineer at Strahan Family INC.

She Has Quite A Strong Academic Background

Also said with the grain of salt is Jean apparently studied at Moorehead State University and additionally attended the University of Oxford.

Turns out the ex-Ms. Strahan is also a former student of institutions like Mary College, Bismarck, ND, NDSU Bison, and Carson High School.

How Jean Muggli And Her Ex-Husband, Michael Strahan Met?

Strahan and Muggli met in 1994 at a spa in Manhattan when the former was still a star NFL defensive end for the New York Giants.

As for Jean, she was working at the same skincare shop. She was 26 and had just moved to New York City, where she was also running a boutique on Madison Avenue.

In an interview, Muggli recalled how he turned into a repeat customer after meeting her:

“I figured either he was the cleanest man on the planet or he wanted to ask me out.”

The NY Daily News reports Strahan, after Muggli for the first time, visited the salon almost daily to purchase lotions and soaps he didn’t need.

She said while she was not into athletes because of the stereotypes, she soon realized then defensive back was not a typical macho kind of footballer.

Jean And Michael Remained Married Until The Mid 2000s

Jean and Michael married in July 1999 reportedly in North Dakota and later welcomed twin daughters, Isabella and Sophia in 2004. The couple with their daughters lived in Montclair, NJ for a while.

However, by 2005, their relationship would start to fall apart. They officially got divorced in July 2006 but not before going through some messy court battles.

They Had Messy Divorce Battles For Years

Amidst the divorce and even after that, they continued to fight over the custody of their teen daughters in addition to each of them throwing arrays of allegations at one another. Jean Muggli first accused her husband of emotional and physical abuse.

The Carson-born blonde also said her former footballer husband cheated on her, showed less interest in her and their marriage. She even accused him of filming her sister, Denise when she was undressing.

Jean additionally claimed the abuse from Michael once left her with a damaged kidney which made her vomit blood for days.

What Michael Strahan Said About Jean Muggli During The Divorce

Against his ex-wife’s initial blames, Michael said he never physically or psychologically harm any of his loved ones, especially his wife.

He said the rift in their marriage actually started when he confronted Jean for an unexplained withdrawal of $3.5 million. The court later dismissed the complaint in light of Muggli, herself confessing her husband did not touch her during the marriage.

In the divorce settlement, Jean Muggli, nonetheless, won a hefty amount easily in the domain of eight figures and more (details down below).

Despite failing to prove her former partner’s abuse, the court reimbursed quite generously to Muggli. For starters, she received $15.3 million as alimony and a monthly payment of $18,000 for child support. Though the officials reduced the amount to $13,000 after Michael retired from the NFL in 2008.

In addition to millions, she got the majority custody of her and Strahan’s twin daughters and a share of $1.8 million from the sale of the Strahan mansion which was worth $3.6 million.

Further, she reportedly is also the owner of a sizeable property, a Sycamore Bend Plantation which includes a beach volleyball court, a tennis court, and a horse-riding ring, as well as a half-basketball court with pink out-of-bounds lines. It also has a renovated five-stall barn.

Though the mystery remains what Jean’s current financial table looks like. Whatever the case, she could still very well be a millionaire who just happens to live a low-key life.

Years After Their Divorce Settlement, Jean Muggli Filed Another Case Against Michael

People hadn’t seen any unusual tensions between the divorced couple, Strahan and Jean Muggli since their initial court agreement.

Then in June 2019, Jean brought a case against the Good Morning America co-host — claiming Michael owed her annual cost of living adjustments to the child support payments.

The aforesaid case was still ongoing and the following year in early 2020, Michael Strahan sought full custody over his then-15-year-old twin daughters with Muggli. He at the time alleged his ex-wife, Jean had been physically and emotionally abusing the girls.

Strahan accused the graduate of Mary College of emotionally draining their twin daughters and restraining them from playing volleyball and partaking in equestrian events in a bid to get primary custody of the children.

The former Giants no 92 also claimed how Muggli refused to let the girls have their passports ahead of a European vacation with their father.

Jean, On The Other Hand, Accused Michael Of Stalking Her

Responding to this, Muggli in March the same year, to the court, said Strahan was, instead, having her watched “around the clock” by private investigators, though which his lawyer later denied.

She added Michael “financially battered” her with lawsuits and even put her under “around-the-clock surveillance.” She also asked the court to make her ex-husband pay more for child support.

Muggli argued the amount of money had been the same since 2009 and Strahan wasn’t agreeing to increase it up. Jean said when she asked Strahan to review the initial child support agreement, he instead deployed private investigators at her home, 24*7.

The mother of two claimed the Super Bowl XLII champion overwhelmed her financially with several other lawsuits of his own. Eventually, by Nov 2020, Strahan and the one-time salon worker settled their dispute once again but this time the conditions remained under the wraps.

Before Jean, Michael Strahan was the husband of Wanda Hutchins, an interior designer. With Hutchins, Strahan had two children, Tanita, and Michael Anthony Jr.

The divorcee, who lost millions to his second ex-wife, though, is currently in a relationship with his girlfriend, Kayla Quick, according to multiple outlets.

Jean Muggli Was In Bisexual Relationship

Strahan’s former spouse, Jean, too reportedly was dating another partner until recently. Surprisingly though Muggli’s this bae was a woman from New York and a couple of years older than her.

Interestingly enough, there, however, were no reports announcing the coming out of Michael’s ex-wife. In fact, people got to know about her sexual orientation through a bit of bad news.

As such in June 2021, the police arrested Jean Muggli for violating an order of protection for a New Yorker, Marianne Ayer.

What followed was the revelation that the twins’ mother had been dating Ayer for some time and they had even gone through a bad breakup with Marianne alleging Jean of violent temper and abusing behavior.

The officials took Jean into custody after she showed up at her ex-girlfriend’s Upper West Side home in New York at around 7 p.m on June 25. Marianne then accused the Carson girl of grand larceny, disorderly conduct, harassment, and forcible touching, according to TMZ.

Ayer also alleged Jean threatened her with a plastic gun and kicked her German Shepherd.