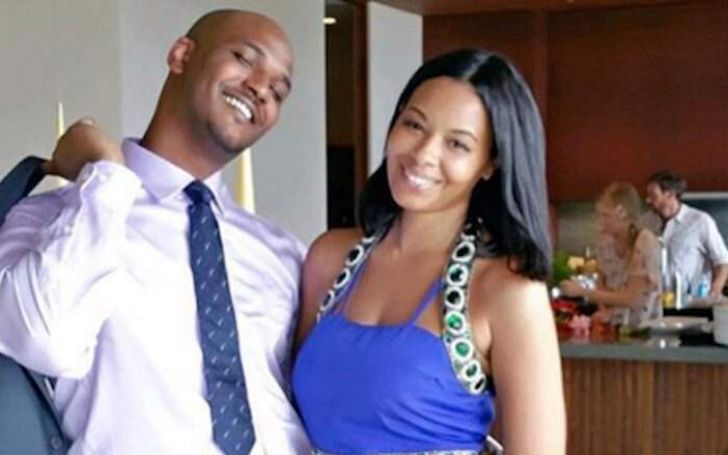 Michael Wayans is an American actor and comedian, also famous as the son of veteran actor Damon Wayans Sr. The Lethal Weapon actor shares Michael with his ex-wife, Lisa Thorner.

In addition to himself, Michael has three siblings who are all into acting just like their daddy. Now talking about his personal life, the budding actor is in a long-term relationship with reality star Vanessa Simmons. Now the big question here is, does the couple share any children?

Today in this article, we’re going to take an in-depth look into the life of Michael aka Mike Wayans, & find out many intricate details of his relationship.

How old is Michael Wayans? His Early Life

His age is 37 as of 2022. Damon Wayans’ son Michael Wayans was born on March 28th, 1985, in Los Angeles, California. He is of African-American ethnicity and has American nationality.

Michael Richard Wayans is the second oldest child between Damon Wayans Sr. and his former wife Lisa Thorner. His parents were married for around 15-years before calling it quits.

Mike grew up alongside his siblings in LA from where he also received his formal education.

He has three siblings

Michael’s oldest brother Damon Jr., born November 18th, 1982, is a prominent actor. He is widely known for his role as Brad Williams in the ABC sitcom, Happy Endings. For the role, he even received a Critics’ choice TV award nomination. He is happily married to Samara Saraiva.

In addition to Damon Jr., Mike has two sisters, Cara Mia Wayans and Kyla Wayans. Both of them are also actors who appeared in a few small projects. They are not active in the entertainment industry at the moment.

Michael Wayans is a member of the prominent Wayans family

We’re sure that by the surname alone you must’ve figured out that he belongs to the Wayans family. Well, you are right. His dad Damon Sr. is one of nine children between Elvira Alethia and Howell Stouten Wayans.

The big family has become a Hollywood royalty thanks to their service, on and off the camera. At first, it was Keenan who paved the path for all his siblings. He was solely responsible for creating the show, I’m Gonna Git You Sucka and In Living Color. The rest of the Wayans siblings, especially the boys starred in the two shows.

Besides, Michael’s father Damon Sr. is a comedian who became a prominent face after he wrote and performed in the sketch comedy show, In Living Color. His most iconic characters in the show are Homey D. Clown, Blaine Edwards, and Handi-Man.

What does Michael Wayans do? Is He also an actor?

Yes, Michael also has tried his hands in acting, however, he didn’t make a big name for himself just like his dad or uncles have.

The most intriguing part of Michael’s career is that he has not only tried his hands in acting but in another field as well. He has worked in the music department as a composer. While his acting credits include My Wife and Kids, and Blankman. He played a character named Mike in the TV series, My Wife and Kids from 2001 to 2003.

He worked as a composer for the Dance Flick and for eleven episodes of The Underground.

Since 2005, Michael is enjoying a long-term relationship with TV personality, Vanessa Simmons. Not much information is available regarding the early phase of their relationship.

Similar to Mike, his girlfriend Vanessa is also a member of the prominent family. She is one of the two daughters of famous American rapper, Joseph Simmons aka Rev. Run. Her father is the original founder of the hip hop trio, Run-D.M.C.

Michael Wayns and Vanessa are a parent of one child

The couple became parents for the first time in Feb 2014 when they welcomed their first child, a girl named Ava Maria Wayans.

In early 2014, the pair organized a baby shower for their then-upcoming bundle of joy. At the intimate function, both sides of the family members including Michael’s dad and brother Damon and Damon Jr. as well as Simmons’s father Rev. Run were in attendance.

Soon after the birth of their first kid, Simmons told ET Online in an interview that she and her boyfriend won’t be welcoming any more kids before tying the knot.

She said at the time,

“Dealing with a 3-year-old is very challenging, but I think eventually yes [we will have more kids] after Mike and I tie the knot.”

To be fair there are a lot more of Vanessa’s fans as opposed to Michaels and all of them want Wayans to pop the question now. What’s more, many of them are arguing that Vanessa should look for alternatives as despite being in a relationship for so long, there seem to be no plans for engagement let alone a wedding.

Although Simmons herself has subtly stated numerous times about being eager to marry, her boyfriend is yet to take the big step.

Furthermore, as of now, the duo seems to be not ready to get married anytime soon. Hopefully, we will get to see Vanessa as Michael Wayans’ wife soon. Fingers crossed!

Is Michael active on social media?

On the other hand, Michael Wayans girlfriend Vanessa is on Instagram with over 1.9 million followers. She also has over 54k followers on her Twitter.

As a successful actor, Michael, aka. Mike Wayans, has undoubtedly made a huge sum of money from his career. As of 2022, he has amassed a total of $2.5 million in net worth. It is expected to increase even more in the days to come.