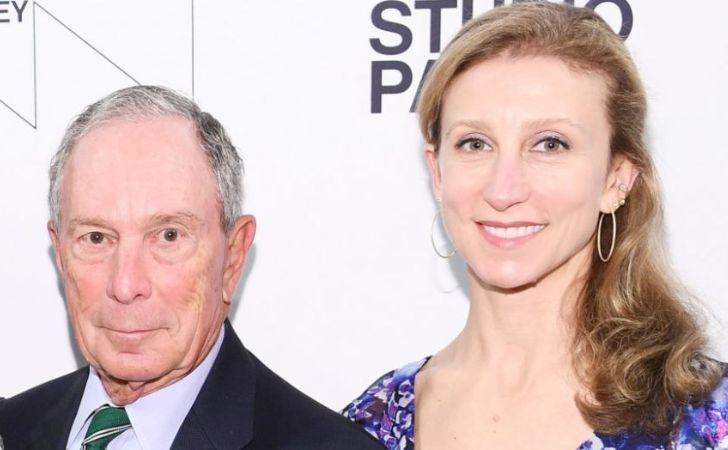 Emma Bloomberg is the CEO of Murmuration, which is a public education advocacy organization. Further, she is also famous as the daughter of Mike Bloomberg, a billionaire businessman, politician, and the Former Mayor of New York City.

Like her father, Emma has also chosen a business and is an active philanthropist as well. Besides her profession, Bloomberg is a married woman. In fact, she married for the second time after her relationship with her first husband Chris Frissora failed.

Well, there are numerous things you would love to know about Mike Bloomberg’s daughter. Continue reading to know.

As we said earlier, Emma Bloomberg is the oldest daughter of father Michael Rubens Bloomberg, and mother Susan Brown. She was born on May 10, 1979, and is 42 years of age in 2021.

Born to a celebrity parent, Emma gained huge exposure from an early age. She also shared a great relationship with both her father and mother, but unfortunately, her parents divorced when she was merely 14 years old.

Talking about her education, she did her high school at Princeton College. Later, she joined Harvard University, where she finished her graduation in business and public administration.

She is not the only child of her parents. She rather has a younger sister named Georgina Bloomberg. Like her, her sister is also a business person. Georgina recognizes herself as an equestrian and she is also the owner of the equestrian team New York Empire.

She has also participated in numerous competitions and has earned thousands of dollars in cash prizes. As per the reports, she started competing at the very young age of 6.

Apart from horse riding, Georgina is also a philanthropist. Further, Emma along with her sister also was part of the documentary film Born Rich in 2003.

Just for a fact, both sister shares a great relationship and are strongly bonded at present as well.

She Is The Founder & CEO Of Murmuration

Bloomberg began her career professionally in January 2002, when she worked as a Mayoral Program Coordinator for the City of New York. Later from January 2006 to September 2006, she was the Summer Associate – Marketing for Pfizer.

Well, since November 2014, she is the founder and CEO of Murmuration, as per her Linkedin. Needless to say, she has been doing great as a professional.

Born as Emma Beth Bloomberg, she has been married twice in her life so far. She was first married to Christopher Paul Frissora, a multi-millionaire businessman, and the Managing Partner at Maghan Advisors. He is also famous as the son of business executive Mark Frissora and his wife Jennifer Frissora.

Emma and Chris’ wedding was held on June 11, 2005, in North Salem, New York, at the residence of her mother Susan. At the time of the marriage, Bloomberg was 26 whereas Frissora was 25 years of age. Both the duo looked adorable in their wedding gown.

But how did it all begin between the two? Well, they met for the first time at Princeton College. Soon they became friends and joined Harvard University, where they earned their master’s degrees in Business and Public Administration. They soon became good friends leading to a romantic relationship & marriage.

But despite all this, their relationship didn’t continue for long. They have not announced their divorce publicly but they reportedly divorced after over a decade of marriage.

They Have A Daughter From Their Marital Relationship

From their marital relationship, Emma has a daughter named Zelda Violet Frissberg. She was born in July 2015 almost over 10 years after their marriage. Needless to say, the duo despite their divorce share a great relationship with their daughter.

After her divorce from Frissora, Emma Bloomberg married for the second time. This time to a disgraced charter school advocate, Jeremiah Kittredge. Just for a fact, he is the former CEO of Excellent Schools Advocacy.

As per the reports by The Daily Mail, their wedding was held in New York City, and Rabbi Daniel Gropper of Westchester County officiated at the ceremony.

Well, though the couple married in 2019, they kept their wedding a secret for a year. They revealed their wedding only in 2020. Apparently, the couple is leading a beautiful marital relationship.

Emma is Involved In Philanthropic Activities

As we said earlier, Bloomberg is an active philanthropist. In fact, she has also already worked with many non-profit organizations. AS per the reports, she was the senior planning officer for the Robin Hood Foundation. Further, she was also the Chief of Staff for the foundation from July 2012 to March 2014.

Further, she also actively involves herself in charity work and fundraising events. She also works with a national grassroots advocacy organization named Stand for Children.

How Much is Emma Bloomberg’s Net Worth?

As a successful businessperson and the owner of Murmuration, she definitely earns a big chunk of money. However, she has not revealed the exact sum of her net worth. Well, her husband Georgina Bloomberg is pretty rich with $100 million in net worth.

On the other hand, her father is a billionaire. As of 2021, her father Michael Bloomberg has a net worth of $76.8 billion, as per reports by Forbes.