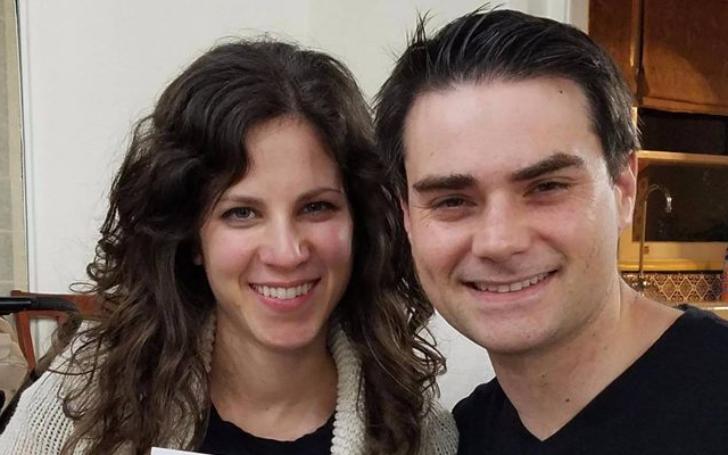 Mor Shapiro is a celebrity spouse who is famous as Ben Shapiro’ wife. Her husband is one of the most controversial conservative commentators. On the other hand, Mor is a family medicine doctor.

The pair seemingly have two stark opposite careers, however, their marriage life didn’t seem to have any problem due to that. In fact, their marital relationship is stronger than ever. Besides, they are a proud parent of three beautiful kids.

There are seemingly many interesting facts about Mor that you might not know. So without further ado, let’s find out about her early life, nationality, professional career, and more!

She was born Mor Toledano in 1988 in Haifa, Israel. She is the daughter of a Moroccan Jewish who had moved to Israel several years before her birth. Mor belongs to the Israeli Jewish ethnicity and was raised in an Orthodox Jewish household.

Mor alongside her family moved to Sacramento, California at the age of 12. She finished high school at a local high school in Sacramento.

Talking about her parents, well, Mor has made sure to make her life a big box of secrets. Not only does her husband ever share pictures with her but she herself is not quite active on social media. It seems her Orthodox upbringing has something to do with her secretiveness.

She studied Behavioural Neuroscience and Medicine at the David Geffen School of Medicine at the University of California, Los Angeles. She joined this decorated institution back in 2005. The celebrity spouse graduated with a Bachelor of Science in the year 2015.

Up until 2019, she was working at Kaiser Woodland Hills as a Resident Physician.

The lovebirds exchanged vows on July 8th, 2008. The ceremony took place in their ancestral country of Israel and it was an intimate wedding to boot.

Ben’s father wrote the processional song which brought tears to everyone’s eyes. As both of them were raised in an Orthodox Jewish household, their marriage was done the same. In this wedding, the wife is not allowed to divorce her husband as the husband is the only one who can do it.

While explaining his beautiful marriage, Ben wrote in a blog, “It was a beautiful wedding in Acre, Israel, overlooking the ocean at sunset.” Moreover, while talking about their plans to bring children into this world, he wrote, “Together we plan, with the help of God, on having healthy, happy, freedom-loving children who will grow up with the security provided by the armed guard.”

At the time of their marriage, Mor was 20-years-old which caused a major stir in the media due to the fact that she was quite young.

Initially, the pair had met back in the mid-2000s. It was Ben’s sister Abigail who first introduced them to each other. They got engaged in the year 2007.

Mor Shapiro is a mother of three children

From their long-term marital life, the lovebirds became a parent of three kids. Just like we mentioned above, Mor and Ben, both remain secretive when it comes to their personal life. This is why there’s limited information about them.

Still, we have found a couple of info. Their eldest child, a daughter named Leeya Eliana Shapiro, was born in 2014. After her, Mor gave birth to a son in 2017. Subsequently, a few years later, she became the mother of her third child, whose gender is not known.

At the time of his first child’s birth, Shapiro wrote in his blog,

“You are the best thing that has ever happened to us, and that’s what makes all the poop and the crying and the late night feedings and the sleep deprivation worth it.”

Their eldest daughter was born with a health deformity

The pair’s eldest child Leeya was born with a hole in her heart. Ben revealed the tragic information while calling out Jimmy Kimmel. What happened was, during his show, Jimmy talked about how Obamacare helped his youngest son William Kimmel during his open-heart surgery.

Interestingly enough, Ben’s daughter’s doctor was the same one as Jimmy’s son’s.

Just like in any other relationship, Mor and Ben’s relationship wasn’t immune to problems. When the pair started their relationship, both of them were living in different states. While Mor was studying at UCLA, her husband Ben was thinking of moving to New York for a job.

Thankfully, Mor was able to transfer her college to New York and the pair didn’t have any issue with that. Moreover, Mor wasn’t the only one who sacrificed for their relationship. When Mor had to move to California because of her education, Ben also decided to move his job to the location.

Well, a relationship really prospers when both the party are willing to compromise.

Ben Shapiro and WAP Controversy: Dragged his wife into it

It’s clear that Ben is not a big fan of Cardi B and Megan Thee Stallion’s hit song, WAP. When the song became a worldwide sensation, Shapiro being Shapiro criticized the otherwise hit song.

According to him, the song is degrading to women. In order to prove his point, he even dragged his wife into the picture by tweeting,

As I also discussed on the show, my only real concern is that the women involved — who apparently require a “bucket and a mop” — get the medical care they require. My doctor wife’s differential diagnosis: bacterial vaginosis, yeast infection, or trichomonis.

Moreover, he also added, “As I also discussed on the show, my only real concern is that the women involved – who apparently require a ‘bucket and a mop’ – get the medical care they require. My doctor wife’s differential diagnosis: bacterial vaginosis, yeast infection, or trichomonis.”

When he added his wife into the mix, he became the subject of numerous nasty tweets. Further, criticizers also talked about the pair’s intimate life.

How much is Mor Shapiro’s net worth?

Well, it’s not surprising to know that Mor earns a substantial amount of money from her career as a doctor. That being said, we can’t put a number on her total fortune.

On the other hand, her husband Ben has an estimated net worth of $20 million. He earned his wealth from his career as a commentator.