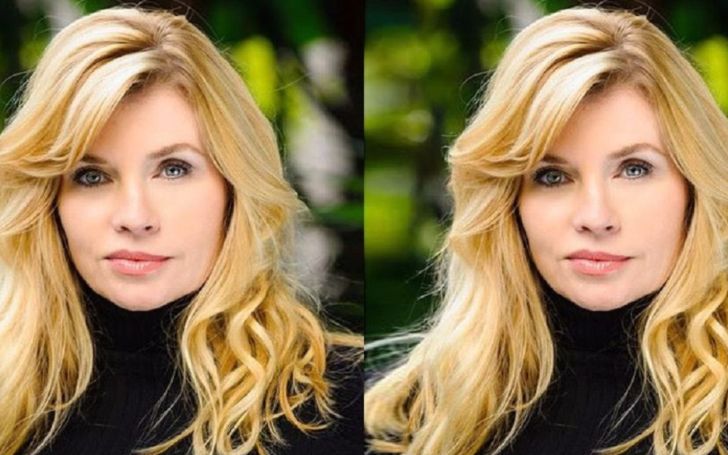 Nadine Caridi, a former American model, rather famous as the ex-wife of the notorious stockbroker, Jordan Belfort. Belfort rose to prominence after he published a book based on his experience at Stratton Oakmont, The Wolf of Wall Street in 2007. The book was later adapted into an eponymous film starring Leonardo DiCaprio.

Nadine Caridi was the second wife of Belfort. The former pair even shares two kids, Chandler and Carter. People often recognize Caridi as Belfort’s ex-wife, however, she had already made a buzz with her modeling work before she even met him.

Let’s shed some light on Nadine’s background and know about her parents, net worth, married life, and children.

Born in London, Caridi Grew Up in New York

Nadine Caridi was born on November 6, 1962, in London, England. She moved to the United States as a child and grew up in Bay Ridge, a neighborhood of Brooklyn, New York. She belongs to a mixed ancestral background. Her father was Italian while her mother belonged to German, Dutch, and English ancestry.

Now we know why she was called, The Duchess of Bay Ridge.

Caridi studied clinical psychology at Pacifica Graduate Institute obtaining a Master’s degree. Later, she obtained her Ph.D. in Somatic Psychotherapy in 2015. As of now, she works as a marriage and family therapist.

Nadine Caridi Did Modeling in the ’90s

Nadine Caridi started her professional career in modeling in the ’90s. She started as the poster girl for the beer brand “Miller Lite.”

Later, she went on to work as a featured model in many national commercial campaigns including the Monday Night Football.

Margot Robbie portrayed Nadine in “The Wolf of Wall Street”

In 2013, Martin Scorsese produced and directed the movie, The Wolf of Wall Street based on Jordan Belfort’s memoir published in 2007. Actor Leonardo DiCaprio played Jordan Belfort in the movie.

After meeting in the late eighties, Nadine Caridi and Jordan Belfort dated for a couple of years before they tied the knot in 1991. Their wedding took place in the Carribean.

Belfort was still married to Denise Lombardo at the time when he started an extra-marital affair with Nadine. It was because of their relationship, Lombardo divorced him in the early 1990s.

After Nadine and Belfort’s marriage in 1991, the pair spent a joyous time for a couple of years. The then-lovebirds welcomed two children, a daughter named Chandler Belfort on July 29, 1993, and a son, Carter Belfort on August 15, 1995.

After the pair gave birth to their two children, trouble started brewing in their marital life, all due to Belfort’s addiction to narcotics and his infidelity. These issues later led to their separation and eventually, they divorced in 1998.

Nadine Caridi was dating Alan Wilzig before she started dating Jordan Belfort. As ironical as it sounds, her then-beau Wilzig introduced her to Belfort in the late eighties at the Hamptons pool party.

As per Business Insider, Alan Wilzig is a semi-professional race car driver. Besides, he previously served as the president of the Trust Company of New Jersey, owned by his father, Siggi Wilzig.

Belfort Had a Yacht Named After His ex-wife Nadine

Belfort bought a luxury yacht that was originally built for late French designer, Coco Chanel. Later on, he renamed the yacht as Nadine.

Nevertheless, the luxury yacht sank off the east coast of Sardinia in June 1996. Frogmen from the Italian Navy special force rescued everyone on board.

Belfort later revealed that he insisted on sailing out in high winds, despite the Yacht captain’s order which in the end, resulted in the accident.

As of now, Nadine Caridi is happily married to John Macaluso. Her second husband, Macaluso is a New York-based entrepreneur. Besides, Macaluso also worked as the CEO of Wizard World. As per the sources, Macaluso is 22 years older than her.

We all behave poorly in relationships once in a while, it’s normal. But when poor behavior becomes a habit, relationships begin to dissolve. Here are 4 big habits to avoid:⠀⠀⠀⠀⠀⠀⠀⠀⠀ ⠀⠀⠀⠀⠀⠀⠀⠀⠀ 1️⃣ Too much criticism: constant complaints or expressions of dissatisfaction can eat away at both partners’ spirit and sense of hope.⠀⠀⠀⠀⠀⠀⠀⠀⠀ 2️⃣ Failure to empathize: both partners must be able to rely on one another to receive support and compassion.⠀⠀⠀⠀⠀⠀⠀⠀⠀ 3️⃣ Ignoring important complaints: if a partner does not feel heard, their early childhood wounds of rejection or abandonment may be triggered leading them to shut down.⠀⠀⠀⠀⠀⠀⠀⠀⠀ 4️⃣ Technoference: when it feels like a partner is paying more attention to their phone, computer, or TV than you.⠀⠀⠀⠀⠀⠀⠀⠀⠀ ⠀⠀⠀⠀⠀⠀⠀⠀⠀⠀⠀⠀ from @psych.today⠀⠀⠀⠀⠀⠀⠀⠀⠀ #relationships #relationshiptips #marriage #marriagetips #mentalhealthtips #mentalhealth #mentalhealthmatters #mentalhealthawareness #psychology #psychotherapy #counseling #therapist #therapy #therapytips #drnae #drnadinemacaluso

Macaluso has three children, all daughters, Frankie, Allie, and Nicky, from his previous marriage. Recently in March 2020, Nadine and her husband became grandparents for the first time. Nadine shared a photo with the newborn, Charles John, on her Instagram.