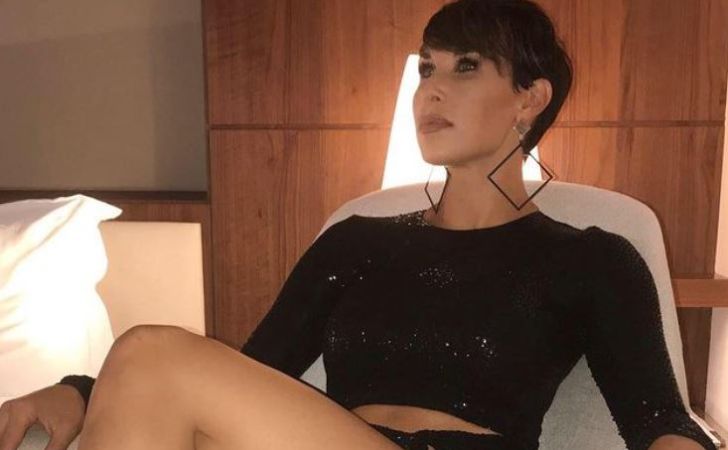 Jennifer Pfautch is a successful American publisher who currently works at Paradigm Talent Agency. Not only this, but she is also a producer and Senior Vice President at BraveLife LLC. Besides all her professional endeavors, Jennifer is also widely famous as the wife of Omari Hardwick.

If you didn’t know, her husband is an actor famous for his work in Power, Army of the Dead, and numerous others. Well, Pfautch shares a great relationship with her spouse. Further, there are a lot more interesting details about her that you would like to know.

In that case, let’s get started.

Jennifer Pfautch Wiki: She Was Born in The United States

Omari Hardwick’s wife Jennifer Pfautch was born in 1980 in Saint Louis, Missouri, United States. As of 2021, she is 41 years of age. Also famous as Jae Hardwick, she shares a great relationship with her parents.

Unfortunately, she has not revealed the detail about her father and mother but back in 2019, she shared a photo of her dad in his memory on her Instagram. In a beautiful post, she referred to her father as her strength and promised him to do her best in life. She wrote,

“Rest in perfect peace and freedom, Dad. Thank you for my strengths and I promise to do my very best to overcome and reverse the weaknesses that we share as well. I love you. Love.”

Talking about her education, she finished her schooling at a local school in her hometown. Later, she joined California Lutheran University, where she studied from 2002 to 2004.

Jennifer Pfautch Is Married To Her Husband Omari Hardwick

A beautiful couple Jennifer and Omari married on May 4, 2012. As of 2021, the husband and wife are married for over 9 years and interestingly their relationship seems as strong as ever.

Despite the years of togetherness, their relationship seems fresh and lively. The duo never misses celebrating beautiful occasions together. Back in 2019, Pfautch made a beautiful post on her Instagram wishing her husband on their 7th marriage anniversary.

Well, that only reflects the kind of love the couple has for one another. Further, the icing on the cake is that Omari is not just a loving but a romantic husband as well. Back in 2020, in a conversation with People, he opened up about the kind of date he prefers and that sounds pretty romantic.

He stated that more than an expensive restaurant date, he prefers to sit in a park and probably getting old-fashioned golden arches. Let’s hear in his words,

“You know how you can be romantic? You can be romantic by going to a beautiful setting, sitting on a park bench, and getting good ole fashioned golden arches a.k.a. McDonald’s. That’s probably the best I can do romantically.”

She Was Disowned By Her Family Because She Married Hardwick

Racial discrimination and castism prevail and Jennifer was the one who faced it. It may sound unusual, but Jennifer Pfautch, who is a Native American and a German descendant, was disowned by her family, and the only reason behind this was the fact that she was dating a guy outside of her race.

But like any true couple, they didn’t let it weaken their relationship, and stood up against all the odds. They are currently leading a relationship one would only imagine.

If you don’t know, Jennifer is a mother of two children, Brave and Nov, with her husband. The couple shares a great relationship with both their kids. However, the duo has kept most part of their kids pretty secret.

While Jennifer has been leading a blissful life with her kids at present, she also had a rough phase in the past. Her first child was stillborn after a miscarriage at seven and a half months. The incident took a toll on their relationship to the extent that they were on the verge of a split.

But fortunately, American actor Terry Crews came as a savior helping them repair their strained relationship. Omari revealed the fact during the promotion of his film Sorry to Bother You, which also stars Crews. There he said,

“Terry actually said, ‘Man! You can’t leave that girl.’ He grabbed me so hard”

Her Hubby Is Very Protective

As a husband, Omari is very protective of Jennifer. He is always with her, be it social media bullying or any other scenario. And there have numerous instances where he stood by her side, one being an incident where he snubbed a fan trying to click a photo with him completely disrespecting his wife.

Well, he later responded about the incident in one of his interviews where he said,

“It can be half of a look ‘hi’ that’s all we need. Acknowledge that she is a breathing entity. Disrespect is disrespect. Every day of the week and twice on Sundays.”

As we said earlier, Jennifer is a publicist and a producer by profession. But she has also tried her hands in different professional fields. Starting from the beginning, she started her professional career as an Executive Assistant at Creative Artist Agency in 2004. She worked in the position for a year until 2005.

In the year 2008, she joined Syndicate Media Group as a Freelance Account Manager. She was employed there for a year until 2009. Well, since 2017, she is Senior Vice President Development at BraveLife LLC. As of 2021, she has been working with the company for over 4 years.

Jennifer Was The One Who Forced Omari To Take “Power”

Omari’s role in the American crime drama television series Power can be considered as one of his most successful characters. Just in case you don’t know, he had almost turned down the offer to star in the series. And at the end, it was Jennifer who convinced him to take up the role which eventually proved to be life-changing for him.

Well, Pfautch does not take the credit for the change of decision but in a conversation with Ebony, she said,

“I wouldn’t say I convinced him to take the role [in Power], per se. His soul knew it was time to embrace what God had for him career wise, and in order to do that, the role of Ghost was the next step in that process. I honestly said very little; just enough to remind him of his call and his purpose.”

How Much Is Jennifer Pfautch Net Worth?

As a publicist and a successful individual in the entertainment industry, Pfautch definitely earns a big sum of money. Though she has not revealed the exact sum of her net worth, sources assume that she is worth around $1.5 million.

On the other hand, her husband is very wealthy with a net worth of around $5 million, as per Celebrity Net Worth.