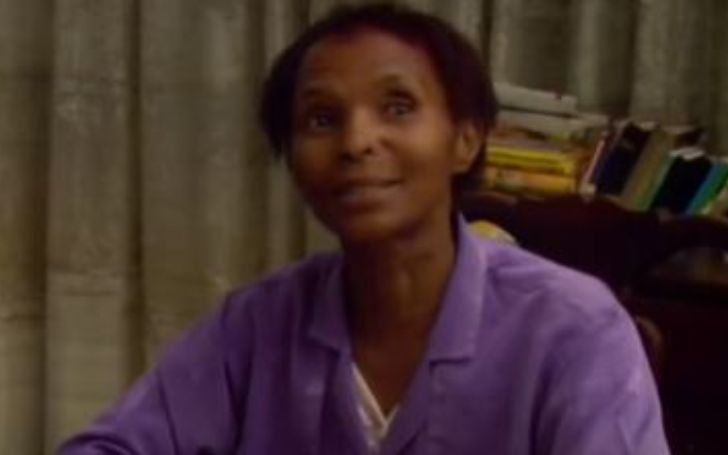 Patricia Noah is a South African media personality. She is popular as the mother of Trevor Noah. Her son is a comedian, TV host, actor, and political commentator.

Trevor is the host of The Daily Show, an American satirical news program on Comedy Central. He previously also hosted the talk show Tonight with Trevor Noah on M-Nt and DStv.

Trevor Noah’s mother Patricia grabbed media attention even more after her 38-year-old son published his autobiographical comedy book Born a Crime in 2016. The book is about Trevor’s upbringing in native South Africa during the time when having mixed-race babies was considered a crime.

Well, here are numerous unknown facts about Patricia including her tough childhood, education, and work. Also, find out how Trevor was born in the apartheid era?

Who Is Patricia Noah? Details Of Her Parents and Childhood

Patricia Nombuyiselo Noah is a South African media personality and mother of renowned comedian Trevor Noah. She was born in South Africa to Temperance and Nomalizo Frances Noah.

She holds a South African nationality and has Xhosa or Nguni ethnic descent. As per reports, Noah was a middle child who was sent to live with her father. However, her father later sent her to live with his sister (her aunt) at Transkei.

While Trevor was at Transkei, the celebrity mother shared the hut with 14 other cousins from different parents including her aunt’s children.

Patricia Noah Grew Up In Extreme Poverty As A Child

Noah grew up in the slums of South Africa let alone alongside 14 children of her own age. As the government allocated very little land to the public, the residents were forced to live in a very small space.

Without electricity, water, proper food, and infertile soil, sustaining one’s life was an extreme sport. As money was scarce, people sustained themselves with low-level farming.

Well, Noah also had to earn for herself. She would help with fieldwork. Even then, there was barely enough food for all of the children. She had to fight with others in order to get a handful of food.

Sometimes, when they didn’t have food, Patricia would steal animal foods, scraps, or anything she would get her hands on to fill her belly.

During the era when not many jobs were available for black people, Noah luckily landed a typing job. These kinds of jobs were usually reserved for the whites or any other skilled jobs or executive positions.

At the age of 22, Patricia Noah reportedly landed a job to work as a secretary for a large pharmaceutical company in the white area of Johannesburg.

How Did Patricia Noah Manage To Live In Johannesburg During The Apartheid Era?

Although the future comedian’s mother landed a respectful job in the area, it was still considered a crime for black people to reside there. Hence, Noah started looking for alternative ways to spend the night.

At first, Noah spent the night in public restrooms and here and there. Later, she met some Xhosa prostitutes who taught her a sleek way to live in the city. They taught her to disguise herself as a maid and do her job as undetectable as possible.

Sadly, she was often caught and arrested by the guards despite her training and disguising efforts. But as she earned enough money, she would pay the fine and go on doing the same thing.

While living in Hillbrow, Noah met a Swiss-German descent man named Robert Lloyd. Robert was double the age of Noah and saw her as a casual friend. But one night, Patricia asked Robert to have a baby with her even though they were not romantically linked.

She also told him that he don’t have to pay for child support or be in the child’s life if he didn’t wish to be in it. At first, Robert declined the offer saying he didn’t want a child but later on agreed with Noah.

At that time, having an interracial baby was a crime for black and whites with a jail time of 5 years. Nonetheless, the pair welcomed Trevor Noah on 20th February 1984.

Despite having a baby together, Patricia and Robert never spent time or lived together as a couple. Shortly after having Trevor, she moved to Joubert Park.

Moreover, Robert would go out of his way to see his son every once in a while. Later on, he moved to Cape Town and lost touch with Trevor for several years.

How Did Patricia Manage To Escape Jail Time Despite Having A Colored Baby?

As mentioned earlier, having colored babies during that time was an illegal act. Hence, in order to protect Trevor’s identity, Patricia told the doctors that the father of her child was from a different country.

The doctors believed her story and filled ‘another country’ in her son’s birth certificate for the nationality of the father. Likewise, the occupation of the father was left vacant.

After this, Patricia concealed her son’s identity as much as she could by wrapping him in a swaddle to cover him up. When Trevor started growing old, she acted as a maid to Trevor’s alleged parents.

Trevor’s alleged parent was a white lady living in the same building who willingly agreed to help Patricia. While going out with her son and the lady, she would call her Queen and pretend to be her maid around the police officers.

She practically raised Trevor in confinement and isolation from the world in order to escape jail time.

Back in 1992, Noah crossed paths with her husband Abel Ngisaveni when her Volkswagen car demanded repairs multiple times. As time went by, she and Abel fell in love and they decided to take their relationship to the next level.

Abel and Patricia became husband and wife after signing the marriage papers. At the time of their wedding, Trevor was just 8 years old. Also, he didn’t like Abel much and had a bad feeling about him.

Trevor’s half-brother Andrew was born a year later in 1993. While all was going well, Patricia Noah’s then-husband Ngisaveni started drinking alcohol and turned violent towards his family, especially Patricia.

After a while of torment, Noah moved out to live with her mother. During this time, Abel begged for forgiveness and asked Patricia to move in with him. Sadly, things started going downhill once more when their family business Mighty Mechanics collapsed and Noah moved out for good.

As the former couple was trying to mend their relationship, they welcomed their second son Isaac during this time. Unfortunately, Abel was unable to change his bad habits and Patricia eventually finalized her divorce from him in 1996.

After divorcing her abusive husband Abel, Noah found love for the second time. She was married to her second husband Sfiso Khoza and was living a blissful life until 2009.

Unfortunately, Abel later shot Patricia in the face in hopes of killing her at their home in Johannesburg. As per Patricia herself, Abel tracked her down and shot her in the face and back shattering her jaw and piercing her skull, nose, and ear.

Abel even shot a few times at her second-spouse Khoza. After this, Nigsaveni was arrested and pleaded guilty to an attempted murder charge.

During the trial when Patricia called Abel, he threatened to hunt down then-25-year-old Trevor and kill him. Thankfully, Trevor had fled to Los Angeles. Nigsaveni was sentenced to three years of correctional supervision by the Jeppe Magistrates Court.

During an interview with Daily Mail, the mother of three said,

“I am lucky to be alive. When God writes he has to write for humans and he gives you a message that God is bigger than death.”

She also revealed that she was treated under someone else’s name as she feared her ex-husband will come to ‘finish the job’ at the hospital.

How Did Patricia Noah Influence Her Son’s Success In The Comedy World?

While growing up, Patricia went through many hardships and one of the things she learned from life was to use humor to cope with the pain. Even during her treatment after an attempted murder, Patricia joked to Trevor saying,

“Look on the bright side: Now you’re officially the best-looking person in the family.”

She passed down her humor and forgiveness to her son who is now one of the most renowned comedians in the world.

What Is Patricia Noah Upto Nowadays?

Noah currently lives in Johannesburg, South Africa alongside her family. Likewise, she runs a property firm in the same area.

“He is running his business and I’m taking care of my business, I have my own money and business,”

In 2016, Trevor published his autobiographical book entitled Born A Crime where he talks about his and his family’s life. A film adaptation is being produced by Paramount Players with Lupita Nyong’o as Patricia Noah.