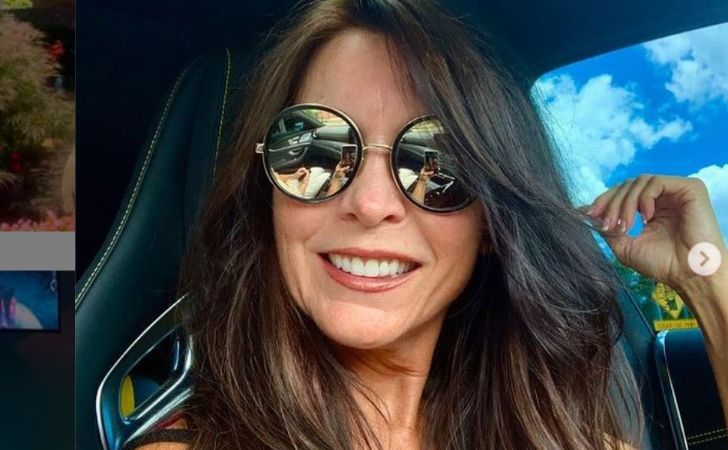 Wendy Barlow is an American actress, producer, and a former WCW personality. She is mostly recognized as the wife of retired world heavyweight champion Ric Flair. Initially, she served as the WCW valet for the former wrestler.

Since her marriage to Ric, Wendy has become a media sensation and is often in the news for one reason or the other. Likewise, she is also the stepmother of four children born from her husband’s former relationships.

Well, in this article, we are going to talk about her career, relationships over the years, and also her children. Be in touch with us.

Wendy Barlow Was Born In The United States

One of five wives of Ric Flair, Wendy Barlow was born on December 4, 1967, in the United States. As of 2021, she is 53 years of age. She is an American national and is white in terms of ethnicity.

Talking about her education, she was a student at La Sorbonne in France, where she finished her graduation in 1993. A bright student from a young age, Wendy went on to pursue a professional career soon after her graduation.

While the details about her parents are unavailable, she had a brother named Bobby, who passed away in 2020 because of cancer. She announced the news of her brothers’ death on her Instagram. Have a look!

Similarly, she also has a sister. She still shares a good relationship with her sister.

Wendy Barlow Is The Wife Of Retired Wrestler Ric Flair

Like we just mentioned, Wendy is mostly recognized as the current wife of American wrestler Ric Flair. She is the latest among his five wives. The couple married on September 12, 2018, at a beautiful resort in Florida.

Their wedding was an intimate affair and very few friends and family members attended the ceremony. One of Ric’s daughter Charlotte Flair also attended the marriage, along with other guests like The Undertaker, Dolph Ziggler.

To everyone’s surprise, the “Nature Boy’ had hinted his marriage hours earlier via a post on his Instagram, which he captioned,

‘It’s Going To Be A Wonderful WOOOOO Wednesday

Not only Ric but the beautiful Wendy also wrote on her Instagram saying,

My Best Buddy From Cali is in town …Something must be going on.’

Their wedding happened just a year after Ric went through a near-death experience, where he was on life support for almost 10 days. Talking about his health scare in a conversation with USA Today, the former wrestler stated,

What I remember was that I couldn’t talk, but I could hear people talking about me. My daughters told me that the doctor said to go in and say goodbye to your daddy, he’s not going to make it.

She Dated Ric For years Before Walking Down The Aisle

If you didn’t know, Wendy and Ric met years earlier in 1993. At the time, she worked as the WCW valet ‘Fifi the French Maid’ for Ric. Years after knowing one another, the duo came to romantic terms in 2013.

They dated for around 3 years before finally getting engaged in 2016. Well, it has been years since the couple is romantically involved and things seem to be pretty good between the two.

Wendy often goes out on vacation with her husband. Just recently, in November 2020, they were seen spending holidays in Tulum, Mexico. The family holiday also included his kids and the wrestler seemed pretty glad soaking up the sun on the beach.

Likewise, Barlow was also pretty delighted in a bikini as she spent the family time.

Wendy Barlow Is an Actress & Producer

She made her debut as an actress back in 1993 in a TV special WCW SuperBrawl III. The same year, she also appeared in two other projects: WCW Fall Brawl and Halloween Havoc, where she was portrayed as Fifi.

Later, in 2013, she appeared in the reality TV series Celebrity Wife Swap, along with her husband Ric. In 2017, she was part of the documentary TV series 30 for 30. Similarly, in 2019, she appeared in an episode of TV series named WWE Raw. back in 2009, she also had an uncredited role as Jogger in The Joneses.

Talking about her producing work, she was an associate producer in the 2014 Drama film, Buried Cain. The movie stars actors like Lance Paul, Charlotte Kate Fox, Leslie Kimbell, and others in the lead.

Wendy’s husband Ric went through four unsuccessful marriages in the past. His first marital relationship was with Leslie Goodman. They were married from August 28, 1971, to 1983.

Later, he married for the second time to Elizabeth Flair. This was one of his longest sustained marital relationships lasting for around 23 years. The duo was married from 1983 until their divorce in 2006.

He married for the third time to a fitness competitor Tiffany Vandermark. They married on May 27, 2006, but like his earlier relationships, this marriage did not last ending up in a divorce in 2009.

For the fourth time, he married Jacqueline “Jackie” Beems. They got married in Charlotte, North Carolina, on November 11, 2009. But as fate had it, just a few years after their marriage, they filed for a divorce in 2012, which was finalized in 2014.

Does Wendy Barlow Have Children?

Besides, she is also a step-mother to four kids, Charlotte, Megan Fliehr, Reid, and David, who are born from Ric’s earlier marriages.

Charlotte was born on April 5, 1986, and is a successful wrestler like her father. She is with WWE since 2012 and even won NXT Women’s Championship title in 2014. She was born from Ric’s relationship with Elizabeth.

Similarly, David is also a wrestler. he was born from Ric’s relationship with Leslie on March 6, 1979. Besides, Reid, who was Ric’s second child with Elizabeth died of a drug overdose on March 29, 2013.

Is Barlow On Social Media?

Besides, she is also on Twitter, with over 1k followers. On both platforms, she gives insight into her personal and professional life.