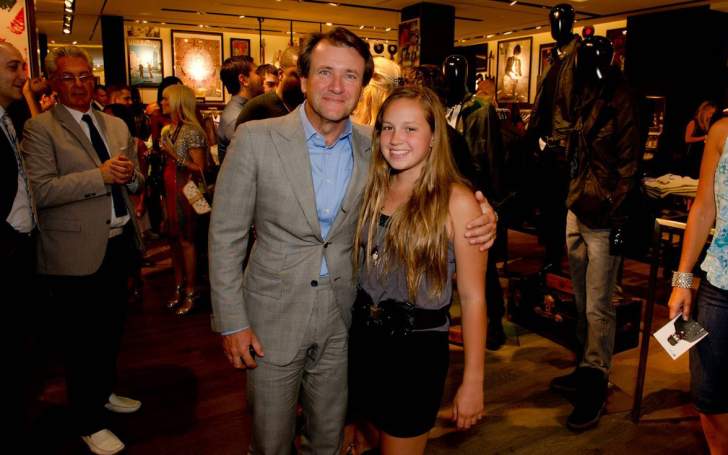 Skye Herjavec is famous to the world as the daughter of Robert Herjavec. Her father is famous for his appearance in the series, Shark Tank. In addition, he is also an investor and the founder of BRAK Systems.

We’re not here to discuss Robert but in fact, his daughter Skye. The star kid has practically spent her entire life behind closed doors. This is why there is little to no information regarding Skye.

However, we have piled all the information that you have been looking for. In this article, find out Skye’s current whereabouts, relationship status, relationship with her parents, and more!

When you are born into a family of celebrities, you are bound to be the center of media attention. Similarly, Skye came to prominence not for her professional or personal accomplishment, but due to her celebrity father, Robert.  The Croatian-born Canadian entrepreneur is widely famed for founding the Canadian integrator of Internet security software company, BRAK Systems. Apart from that, he is also famous for appearing in the ABC reality show, Shark Tank. He has been featuring in the show since 2009.

Talking about Skye, she is the second child of Robert with his now ex-wife, Diane Plese. As of 2022, she is 26-years-old. She belongs to the Croatian ethnic group. Besides, Skye spent the major portion of her childhood in Ontario, Canada, and only moved to the US for her education. As for her education, she went to Havergal College, an all-girls private institute in Toronto. The college provides education from Junior Kindergarten to Grade 12.

Upon graduating high school in 2014, she enrolled in the Bachelors in Business Administration and Management program of the University of Southern California. During her time at USC, she was a member of the Pi Beta Phi Fraternity. Apart from that, she was also on the Dean’s List for Spring 2015. She finished college in 2018.

Skye Herjavec grew up in Toronto alongside her two siblings: She has two half-siblings as well

She was born and raised in Toronto, Canada. Aside from herself, her mom and dad are parents of two kids. Skye has one older sister, Caprice Herjavec, and one younger brother, Brendan Herjavec. All three of Herjavec siblings refrain from coming out in the media. Even their father Robert, who is very much active on social media, is yet to share a single picture of his three elder kids.

Besides, Skye has two half-siblings, a brother and a sister. Her father welcomed fraternal twins, Hudson and Haven, on April 23rd, 2018. Though Robert never shares pictures of his three older adult kids, he often adds photos of his twins. The doting dad is living a high life along with his second wife Kym Herjavec and kids.

It is not known whether Skye and her two siblings are on good terms with their dad and his second wife and kids. Let’s hope they are on excellent terms.

What is Skye Herjavec Doing These Days?

As of 2022, Skye is working as the Investment Banking Credit Risk Analyst at JPMorgan Chase and Co. in Toronto, Ontario, Canada. She has been working in this position since December 2019, and prior to that, she worked as the Financial Analyst for the same company.

Judging by her work till now, it is safe to say, she is definitely her father’s daughter. There’s a big chance that she will become a big businessperson just like her father.

Brief detail on Skye’s Mother Diane and father’s relationship: Her father reportedly cheated on her mother

Robert married Diane Plese in 1990, in an intimate marriage ceremony. It was around the same time when Robert founded his security company, BRAK System, the company that eventually made him a millionaire. We can say, Diane really came as a lucky charm in his life as evident from his current success.

From their marriage, the couple became a parent of three beautiful children, one of them being Skye. Up until their separation, the former flames used to appear publically in various events. However, after being in a relationship for around two decades, their beautiful marital life came to an unfortunate and abrupt end.

The real reason behind their divorce, as reported by tabloids, is Robert’s brief affair with the actress and model, Danielle Vasinova. Apparently, the Canadian mogul and Danielle started their affair in 2013, all the while when Robert was still married to Diane. The extramarital conquest eventually cost Robert his long-term marriage.

Soon Robert and Diane separated in 2015 and they finalized their divorce in 2016.

Skye’s father Robert considered suicide after separation from her mom

It is one of those moments when a person has an existential crisis. In one of these occurring, Robert was once in a place when he even decided to jump out of a hotel he was staying in Toronto. In an emotional interview with PEOPLE, he said, “I just wanted to end it.”

Apart from the tragic separation from his wife, what really made him all-time low is when his three adult children stopped talking to him as well. He further added in the interview, “Everyone has their kryptonite. For me, it was my kids. It took me to a place I never thought I would go.”

Nevertheless, Robert soon recovered from this phase under the guidance of his pastor John McAuley. The pastor urged him to help out the needy and so he did. Robert bought around 100,000 pairs of socks and distributed them to the ones in need.

Skye Herjavec’s Father re-married: Who is her step-mother?

After divorcing his first wife, Robert married his Dancing with the Stars partner, Kym Johnson-Herjavec. Their beautiful wedding took place on July 31, 2016, at the Four Seasons Hotel Los Angeles at Beverly Hills. Right after marrying the love of his life, Robert said

“When I met Kym, I felt complete. I’m so excited about everything we have to look forward to.”

For the wedding, both of them wore matching dresses. While Kym looked radiant and sizzling in a white gown, her husband wore a custom white tuxedo. Many of their close friends and relatives were in attendance. Nonetheless, it looks like Robert’s adult children were not in attendance.

Now talking about Skye’s step-mother, Kym, she is an Australian ballroom dancer. She is famous for her appearance in both the Australian and American versions of Dancing with the Stars.

How much is Skye Herjavec net worth?

There is no doubt that Skye lived an extraordinary life up until her parents separated. Her father Robert has a total net worth of $200 million and while he was married to Diane, he and his whole family used to go on several exotic vacations. In addition, Robert also gifted his daughter Skye a car on her 16th birthday.

Moreover, Skye alongside her older sister attended elite universities in the US. Besides, Skye herself works in a big position in one of the top companies around the world so it is safe to say, she earns a substantial amount of money from her career.