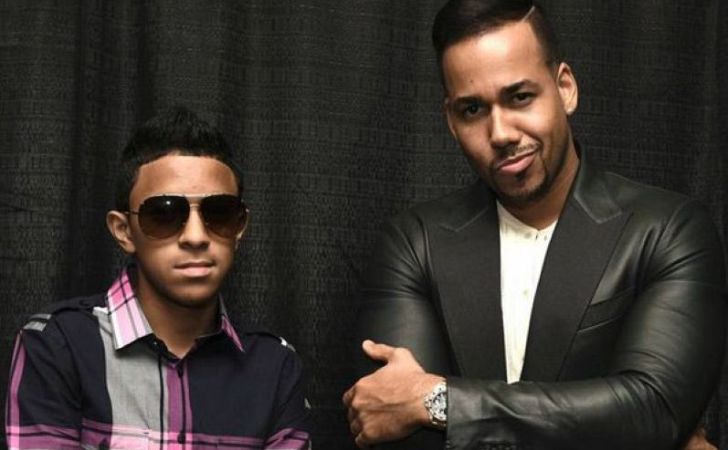 Alex Damian Santos is one of the lucky star kids. He is the son of the famous American singer and songwriter Romeo Santos. His dad is the lead singer of the bachata group Aventura.

As the son of a famous father, Alex leads a luxurious life. However, there are a lot of questions about Alex that seem to be unanswered. While there are claims that Samantha Medina is Alex Damian Santos’ mother, things look a little hazy.

Well, here we will answer all about his career, relationship with his parents, and many other interesting facts.

As we have already mentioned above, Alex is the son of singer and songwriter Romeo Santos. He was born in 2002 and is 20 years of age in 2022.

He also has a younger brother Valentino who was born in March 2019. His father Romeo announced the birth of his new baby via his Instagram in a beautiful post on March 27.

Romeo, who is extremely private about his personal life, has not revealed much about his son. But when it comes to Alex’s mother, things seem a little complicated.

Though there are claims that Samantha Medina is the mother of Alex, there is no proof to authenticate the claims. Also, Romeo has not revealed the actual mother of his first kid.

However, the 20-year-old has made a post of Romeo with a lady on his Twitter account, who is assumed to be his mother Samantha by many. But since there aren’t any mentions about who the lady actually is, it is hard to verify the claim.

Hopefully, the singer talks about the mom of Alex someday. As of now, his rumored mom is now married to her Ari Force husband Eric Medina. The couple also has children together.

Alex And Romeo Have a Great Father-Son Relationship

As of now, Alex shares a great relationship with his dad. But things weren’t always the same. In one of his interviews with The Breakfast Club, Romeo opened up about how he was not a good father in the past. He stated he was too focused on his career and did not give time to his kid.

Further, he also said he was still young when Alex was born and that it was unplanned. In an interview with Telemundo, the singer said,

“Today I enjoy being with my son and I love him, but at the moment I was so young, and the only thing that I could think of was the music and my career.”

However, the singer shares a great relationship with his son at present. Hearing in his words, he said,

With my first kid, I was a kid having a kid. I was a coward, so I ran, I wasn’t in a relationship at the time, it was just something that happened. I have a great relationship with Alex, it’s been great for over a decade.

Lately, Alex has made several appearances with his father on social media and they look really comfortable with each other.

Alex is already 20 but like his father, there are no reports of his romantic relationship. He has not revealed if he is single or dating anyone.

Hopefully, Alex will soon talk about his love life.

Where Is Alex Damian Santos Now?

Romeo Santo Son, Alex Damian Santos is quite busy with his studies as of 2022. He is in college at present and is preparing for his graduation. The star kid has not made a professional start yet but is occasionally seen with his father.

Who Is King Conde Biological Father? All About Erica Mena’s Son