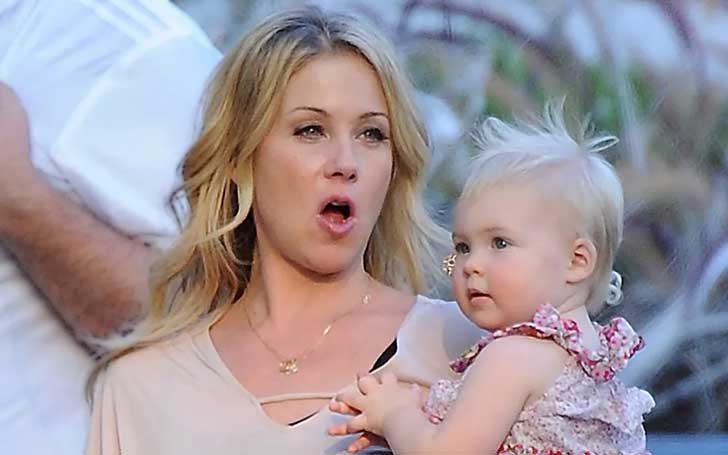 Actress Christina Applegate might not have thought she would be a mother after she battled breast cancer in her mid-30s. But, with her husband Martyn being by her side, everything seemed possible. She won her battle with cancer and then become a mother as well. Christina gave birth to a daughter, Sadie Grace LeNoble, & now lives a happily married life.

In the meantime, alike many celebrities, Christina Applegate has also tried to keep her daughter out of the media attention. So, here we have some exclusive facts about Applegate’s daughter. Read it.

Sadie Grace LeNoble was born on 27th January 2011 to father Martyn LeNoble and mother Christina Applegate. She is the only child of Married… with Children actress and the Dutch bassist.

Sadie made her debut on the cover of People magazine along with her mother. Talking to the magazine, the new mother told “I felt my heart literally open up for the first time and like wrap itself around her. It was profound.”

Former Friends star Applegate announced she was expecting her first child with her then-fiance Martyn in July 2010. The announcement came just months after Applegate and LeNoble got became engaged.

Sadie Belongs to the Mixed Ethnicity

Sadie Grace LeNoble belongs to a mixed ethnical background. Her mother, Christina Applegate has a mixed ancestral lineage of English, Scottish, German, Irish, Welsh, Dutch, French, Danish, Swedish, and remote Norwegian. On the other hand, her father, Martyn LeNoble is of Dutch descent.

Sadie’s Father is a Founder of a Rock Band

Born and raised in Vlaardingen, Netherlands, Martyn LeNoble became interested in music in his childhood days. After he turned 20, he relocated to Los Angeles, America in search of a better opportunity in his career in music.

LeNoble started playing with Thelonious Monster and the Too Free Stooges after moving to Los Angeles. In 1992, LeNoble and his friends, Peter DiStefano, Stephen Perkins, and Perry Farrel founded a rock band named Prono for Pyros.

Sadie’s Mother is a Multi-Millionaire

Sadie’s mother, Christina Applegate started her acting career as a child actor at the age of one. She rose to prominence from her portrayal of Kelly Bundy in the Fox sitcom Married… with Children in 1987. Later, she gained worldwide attention from her guest appearance as Amy in NBC sitcom Friends. With over three decades of an active career in acting, Christina has earned alluring riches.

As of 2020, Christina Applegate’s net worth is estimated at $20 million. Moreover, as per Celebrity Net Worth, she earned around $125k an episode for her appearance in the NBC sitcom, Up All Night.

Sadie’s mother, Christina has maintained her child’s privacy at a top level. The 48-year-old actress is rarely seen with her daughter Sadie in public. Moreover, Applegate doesn’t share her daughter’s photos on social media more often.

Applegate is not active on Instagram where she has more than 1 million followers on Twitter. On her Twitter, Applegate often shares her photos with her friends and colleagues rather than with her family.

My sweet Sadie on the Sea Grass.

Sadie Has a Half-Sister

Though pretty less talked about, Sadie Grace LeNoble has a half-sister. Both her parents were married previously. Her mother, Christina was married to actor Johnathon Schaech while her father Martyn’s first wife’s identity is not revealed as of yet.

Christina doesn’t have any children from her first marriage, however, Martyn has a daughter with his ex-wife. His daughter, Marlon LeNoble is 23 years old. Marlon was born on 31st June 1997 in the United States. Martyn often wishes his daughter on her birthday with a post on Instagram.