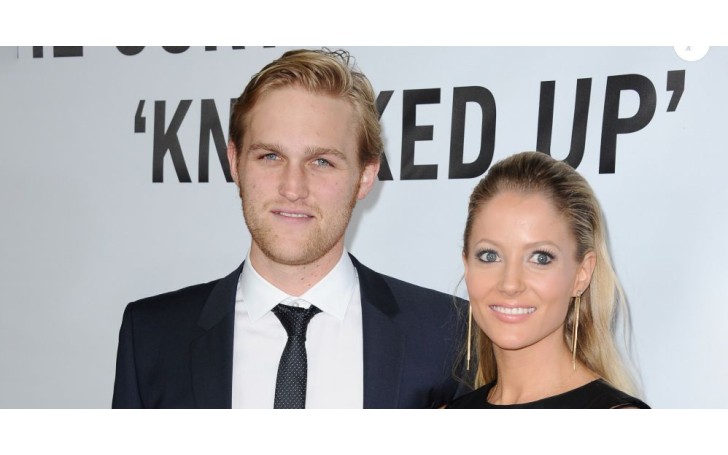 Sanne Hamers is famous amongst us all as the former wife of Wyatt Russell. Her husband Wyatt is famous as the son of legendary Hollywood actor, Kurt Russell.

Sanne and Wyatt were married for a couple of years. From the relationship, the pair didn’t share any children. After separation, Wyatt went on to marry someone, but what about Sanne? Has she moved on as well?

Here today, we’re going to take a closer look at the life of Sanne Hamers, ranging from her early life to her professional life, and find out what is she up to nowadays?

Sanne Lotto Hamers was born in June 1987 in Dronten, Netherlands, and raised in Amsterdam. After her formative years in Amsterdam, she moved to the northern Netherland city of Groningen.

Talking about her ethnicity, Sanne is Dutch and has dual American and Dutch nationality. She received American nationality after she married Wyatt.

Besides, she studied at the University of Groningen. Upon graduation, she moved to the United States.

Around the time she married Wyatt, Sanne was a stylist. Even after she moved to the states, she continued her work as a stylist.

What is Sanne Hamers doing now? She is a Design Consultant

As a former celebrity spouse, a lot of people are curious about her current activity. In many cases, when you divorce a celebrity, a lot of money is involved which directly results in living a lavish life post-divorce.

Nevertheless, that is certainly not the case here. After her divorce, she changed careers and at the moment is currently working as a Design Consultant based in California. She is part of California Closets, a renowned interior designing company.

Sanne is an organization expert. She likes to utilize every nooks and crony of a room. In her bio in CalforniaClosets, she states,

“I believe that starting your day in an organized space reduces stress and allows you to focus on what matters most.”

Besides, Sanne also promotes her work on Instagram where she goes by the username @design.by.sanne.

Her former In-Laws are into acting

Her ex-husband Wyatt is an actor. He started out his acting career as a child star. However, he never took acting seriously as he was into hockey. He was a hockey player first and an actor later.

The star kid played as a goaltender for a lot of pros and amateur hockey teams including the Groninger Grizzlies.

After he played out his hockey career, he fully devoted himself to acting. To this date, his most famous works include Overlord, Lodge 49, and The Falcon and the Winter Soldier.

Moreover, Bryan’s father Kurt Russell, and mother Goldie Hawn, both are renowned actors. While Kurt is famous for his work in Tango & Cash, Overboard, Tombstone, Goldie made a name for herself from Shampoo, The Sugarland Express, and more.

In addition to them, Sanne also had a brother-in-law named, Boston Russell.

Sanne Hamers and Wyatt Russell Relationship: How it all began and ended?

It was back in 2009 when Russel joined the Dutch Ice Hockey club, Groninger Grizzlies. It was during his time at the Groninger club that he first met Sanne.

At first, they crossed their eyes at a local salsa bar. As soon as they saw each other, they had this attraction. Soon, the pair started dating.

They dated for a couple of years before getting married on March 14th, 2012. Upon marriage, Sanne moved to California and started living with her hubby at their home in Malibu, California.

Unfortunately, their relationship couldn’t hold as strong as Wyatt’s parent’s relationship. They separated on March 2nd, 2015, and finally divorced on October 24th, 2017.

Did Sanne Hamers marry after divorce with Wyatt Russell?

Yes, after her divorce from Wyatt, Hamers began a new relationship. She is currently in a relationship with Joe Young.

We first came to know about their relationship after going through Sanne’s social media. Regardless, one thing that isn’t clear is if they are married or not. Whatever the case may be, one thing is for certain, the pair is enjoying their life together.

On the same token, her ex-spouse Wyatt exchanged vows with actress Meredith Hagner. Initially, the lovebirds met on the set of Folk Hero & Funny Guy. They shared the wedding vows on September 2nd, 2019.

No, the former flames don’t share any kids between them. However, both of them became parents with their new partners.

Talking about Sanne’s son, she and her husband have dedicated an Instagram account just for their son. In the account, they share memorable photos of their kid. The photos are absolutely adorable and the caption only adds to the cuteness.

She currently works as a design consultant and the median income for the job in the United States ranges from $25k to $82k a year. Given that she is experienced in this field, we can safely say she earns in the higher range.