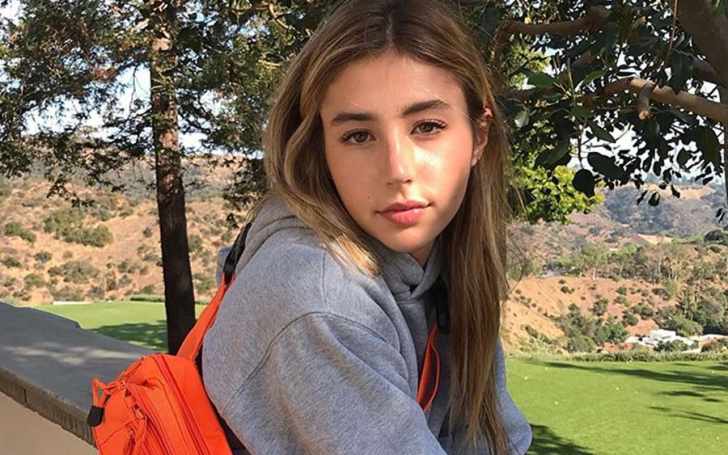 Scarlet Rose Stallone is the famous daughter of Sylvester Stallone and his third wife, Jennifer Flavin. The beautiful daughter of the legendary actor has been in the news ever since her birth. And why wouldn’t she? After all, her father is one of the most decorated actors of all time.

When you are born into a star family, people will assume you are following in the same footsteps. Likewise, many of Sylvester’s fans are curious if his daughter is also interested in acting like her old man.

Let’s find out all that we know about Scarlet Rose Stallone. We will discuss her education, early life, relationship status, and more!

She was born on May 25th, 2002, in Los Angeles, California. She is the third daughter between veteran Hollywood star Sylvester Stallone and his third wife, Jennifer Flavin.

Rose belongs to the mixed ancestry of Irish, Italian, and French. We can say she got to enjoy the perks of different customs while growing up. Further, Scarlet has American nationality.

Scarlet grew up in the affluent neighborhood of Los Angeles. Being a star kid growing up, she had a fairly lavish life.

A little brief on her parents’ relationship

Her mom and dad started dating in the ’90s. After dating for some time, they decided to exchange wedding vows and got married on May 17th, 1997. The pair’s relationship is one of the most enduring relationships in showbiz with over three decades in.

Before marrying Jennifer, Sly had been married two times. He initially tied the knot to the photographer, Sasha Czack on December 28, 1974. After welcoming two kids, the pair decided to call it quits and finalized their divorce on February 14, 1985.

Some times after divorcing his first wife, Stallone started dating his Rocky IV co-star, Bridgette Nielson. Eventually, they married on December 15, 1985, in Beverly Hills, California. However, similar to his first marriage, this one also came to an abrupt end after a mere two years in 1987.

In addition to herself, Sylvester and Jennifer are also proud parents of two more daughters. They welcomed their eldest one Sophia Rose Stallone on August 27th, 1996, and the middle one Sistine Rose Stallone, on June 27th, 1998.

Nevertheless, Scarlet shares an incredible relationship with her older siblings. We can say the three of them are the glue that holds the Stallone family together. They attend several red-carpet events with their famous dad and also share pictures with him all over social media.

In addition to her biological siblings, Scarlet also has two half-brothers, late American actor Sage Stallone and Seargeoh Stallone. Both of them are Sylvester’s sons from his first marriage to Sasha. Scarlet’s oldest brother Sage, tragically passed away at the age of 36 due to a heart attack. On the other hand, Seargeoh is autistic.

What is Scarlet Rose Stallone doing? Is she an actor like her father?

It would be haste to comment whether Scarlet is interested in acting or not. Although she has worked on a couple of projects, she is yet to make a debut as one of the main characters.

As for the handful of projects she has worked on so far, they are Reach Me and Home & Family. In addition to that, she also made an appearance in the shows, Access Hollywood, Entertainment Tonight, Late show with David Letterman.

Moreover, her father Sylvester has talked about her a number of times in many interviews.

She studied at the St. Paul the Apostle School in Westwood, California. While studying at the school, she was a track-and-field star. But here’s the big catch, not only did she participate in the event, she even won the majority of those events. It looks like her dad’s character Rocky literally got inside of her whilst she was running.

Her father Sylvester once shared an Instagram post wherein he congratulated her after she won her third consecutive race in an event. Considering her terrific record, we can say she might just become a great athlete if she is willing, that is.

Does Scarlet Rose Stallone have a boyfriend?

As of right now, Scarlet doesn’t seem to date anyone. She is active on Instagram and we’re yet to see any post where she reveals anyone as her boyfriend or girlfriend, for that matter.

Safe to say, she doesn’t have any time to date right now. Given that she is now most definitely in college, she isn’t looking for a committed relationship at the moment.

Having said that, her sisters on the other hand had started going out since their late teens. When the Stallone sisters did an interview with Access Hollywood, they vividly talked about bringing boys over to the house and introducing them to their father.

While the older ones talked about how people think their father is intimidating even though he is not, Scarlet didn’t comment on anything. Moreover, she even said that while her sister’s date is talking with their dad, she is just sitting back and watching it happen.

When you are born into Hollywood royalty, it wouldn’t be a surprise to know that you live a fairly exquisite lifestyle. Her father is worth a staggering $400 million as of 2021. He earned the major portion of his income working as an actor, director, and producer.

He is primarily renowned for his work in the Rambo and Rocky franchise. Apart from her dad, her mom is a former model who also earned millions of dollars from her work.